During alumni fall weekend, the Brown Alumni Association handed out awards at the Alumni Recognition Ceremony on September 24. Jaykumar A. Menon ’90, who received the William Rogers Award, spoke for many  when he said he'd acquired at Brown a willingness to ask: “Why don’t we do this another way?” 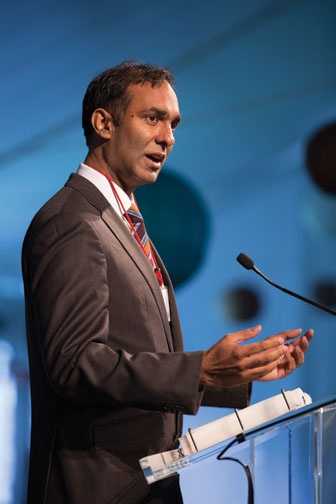 Considered the BAA’s highest honor, this award goes to an alum whose service to society embodies the life “of usefulness and reputation” called for in the Brown Charter. This year’s recipient, Jaykumar A. Menon ’90, is an award-winning international human rights lawyer, social entrepreneur, and teacher whose latest initiative, the Open Source Pharma project, aims to provide affordable medicine throughout the world by establishing a global open-source pharmaceutical ecosystem. As an attorney, he won a $4 billion judgment on behalf of victims of the Bosnian genocide.

Given in memory of the late BAA president, this award recognizes a commitment to diversity and collaboration with the University community.

For a lifetime of outstanding volunteer service to Brown

For fundraising success by graduates of the last decade

For distinguished alumni service to Brown by young alumni

For continuing volunteer service to Brown

For the Brown class that most effectively engages its members