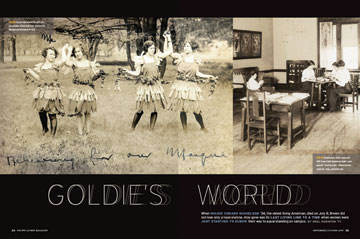 I had mixed emotions reading “Bye Bye, Books,” about the changes to the SciLi (Elms, September/October). As a new graduate student of linguistics in the fall of 1981, I was assigned a SciLi carrel in a secluded spot near the brain and behavior journals. I kept books I’d checked out on the built-in shelf. Etiquette allowed me to (briefly) borrow from another carrel but not for very long. I claimed a small space all my own to think those big thoughts and to get into a flow state that could last all day. And when I wasn’t immersed in my texts or handwritten notes, I was “surfing” the stacks for more articles or admiring the New England colors on the trees outside.

In other words, I was happy and excited without mixing with anyone else. I guess “clusters of cafe tables” and open study spaces is the library of the near future (Brown’s new presence), but I feel sorry for those students who will have to work hard to find private spaces to squirrel away books and nurture new ideas.

P.S. It is a bit ironic that the library is divesting itself of so many books and journals. The rumor when we were at Brown was that the architectural plans had not accounted for the weight of books, and so the Sci Li was slowly sinking, like Venice. In 1981, no one thought a solution would be to move out the books.

The profile of Jamaal Stephenson ’97 asserts that “a football scholarship took him to Brown” (“Scout’s Honor,” Classes, September/October). There were undoubtedly many reasons why Jamaal was admitted, including his athletic prowess. But football was not the rationale for any financial aid Jamaal may have received. Football scholarships have been prohibited by Ivy League agreement going back to 1945. Exclusion of athletic scholarships across all intercollegiate sports was later certified in the Ivy Group Agreement of 1954.

Reading the tribute to Goldie Corash Michelson ’24, I was pleased to see a reference to Brown Women Speak, the Pembroke Center’s oral history collection of interviews with some of Ms. Michelson’s contemporaries (“Goldie’s World,” September/October).

In Brown Women Speak, which began in 1982, more than 250 alumnae from diverse backgrounds relate their personal experiences. Going far beyond traditional reminiscences that one might expect to hear within alumnae oral histories, these stories embody the personal as well as the political. Listeners learn about events and day-to-day life on campus from 1907 to the 1980s. They can also learn about students’ experiences with war, anti-Semitism, sex discrimination, work and economic struggle, race relations on campus, and the denial of access to reproductive health care prior to the women’s movement and the decision of Roe v. Wade.

I highly recommend that alumnae contact the Pembroke Center to contribute their own oral history. The inspirational stories that have already been assembled are treasures that connect us to our Brown “her story.”

Bernicestine McLeod Bailey ’68
Westport, Conn.
The writer is chair of the archives committee of the Pembroke Center Associates.
Thanks for this great article about my grandmother! She always spoke with great love of her Brown years. She would really get a kick out of her fame!
Marilyn Melton
Comment from brownalumnimagazine.com

What an incredible opportunity and honor (“Music for the Angels,” Elms, September/October). I wish I had been at the Notre Dame Cathedral in Paris to hear the premieres and the music of César-Auguste Franck and Philip Glass. No recording can capture the sound of a great organ in its cathedral. The University’s organist and curator of instruments, Mark Steinbach, must be quite the organist to win such an invitation.
Tracey Scheer ’78
Comment from brownalumnimagazine.com

The Counsel of Fr. O’Shea

I noted with sadness the passing of the Rev. Howard O’Shea in the September/October obituaries, but happily this was dispelled by the wonderful tributes I later came across online.

Father O’Shea first made an impression on me the first month of freshman year when my mother told me she had received a letter from a Father O’Shea at Brown, who’d told her he had met me and was seeing me every Sunday at Mass. I knew we hadn’t really met, and I knew he didn’t know whether or not I was going to Mass every Sunday. But most amazingly I knew he had done me (and my new classmates) a solid by eliminating the nuisance of our mothers calling and asking us.

Later, I recall his many stimulating and provocative homilies throughout those years; those on the hunger strikes then being undertaken by political prisoners in Northern Ireland were especially eye-opening. But probably most unforgettable to those of us at Brown in the mid-1970s was his month-long series of homilies on sexuality.

To risk paraphrasing him, I concluded that he was telling us whatever we were doing, or not doing, was okay as long as we were acting with a loving heart and not with cynicism. I thought he might have been off the doctrinal reservation on this, but I sure wasn’t going to argue. It was another case of his giving us what we desperately needed to hear when we really needed it.

Thirty and forty years later I’ve tried to pass on the same thoughts to my own college age kids in close to the same words he gave us. Over the years, when people have questioned me from time to time about why I still go to church, I know one large reason is I’m hoping I will come across another Father O’Shea. May the road rise up to meet you, Father Howard.

I was sadly dismayed by the paltry coverage of the passing of longtime Catholic Chaplain Howard O’Shea. Seemingly an afterthought, the brief squib in the back of the September/October issue lazily rehashed terse facts available from his newspaper obituary. Missing were any personal recollections by the many alumni and staff who benefited from his friendship over the years, or any references to the many contributions he made to the Brown community over his twenty-seven years of campus service, including his calls for ecumenical understanding and tolerance and his helpful mediation of the racial unrest on campus during the 1960s and ’70s.

The BAM missed a great opportunity. He deserved better and we deserve better. Howard was a source of light and love to generations of students, Catholic and non-Catholic alike. He had a wonderful intellect and sense of humor, and modeled daily his Franciscan order’s devotion to simplicity and advocacy for the poor. He hosted legendary parties on St. Patrick’s Day and the Feast of St. Francis and gave challenging and thought-provoking sermons in Manning Chapel. Most of all, he was a treasured friend, ever present for those in need, and a wise and compassionate model of Christian charity. He will be missed dearly.

What a great story from Dean of Admission Logan Powell (“A Chance to Grow,” From the President, September/October)! Somewhere I still have my Brown admissions letter—written by a black man—something that really impressed me as an African American teenager who grew up in the 1970’s.

Identity mattered then, and it still matters today. And Brown is still a leader in inclusion!

I’m disappointed that Deborah Saint-Vil ’10, Miss Rhode Island 2010, is not mentioned alongside the other previous winners (“A Vision of Beauty,” Classes, September/October). Brown women have been killing it for years at Miss Rhode Island competitions.

I have not read The Hatred of Poetry by Ben Lerner ’01, ’03 MFA, but from the way it has been reviewed, I do not think that I would care to do so (“Poems Suck,” Arts & Culture, September/October). When I read good or great poetry, the experience of language becomes something sublime—so highly individual that often, paradoxically, it becomes wholly universal.

A poem enables me to become, emotionally, if only for a moment, an a-historical person—a contemporary black woman or an Elizabethan male or a bloodstained Greek mourning his dead friend in the dust of Troy.

A poem is an experience of language that often becomes a gateway into other experiences that, taken cumulatively and mingled with one’s spiritual and intellectual experiences of life, I would be willing to say are “true” experiences. In the Platonic sense, poems are “shadows” or flakes of fire that lead us toward the sun.

As the classical critics have said: poetry is an experience of the Sublime (capital S).  From what I can gather from the BAM review, Ben Lerner would be well served to clean the MFA classes out of his ears and start chillin’ with my man Edmund Spenser. Learn Latin and start groovin’ with my boy Statius! Listen to the clinking of Sappho’s earrings beside the blue Aegean!

Re “Poems Suck”:
Why do people
Hate contemporary poetry?
Maybe because
It often involves
Overwritten and banal sentences
Chopped up to
Look
Like
Free
Verse.

Felicia Nimue Ackerman
Providence
The writer is a Brown professor of philosophy.

I was sad to learn of the passing of English professor Sears R. Jayne (Obituaries, September/October). I had the privilege of taking a Comp Lit course with Professor Jayne my first semester at Brown. Every lecture was an unscripted, stimulating, bravura performance commanding the attention of more than 200 students and ending in applause each time. He then insisted on teaching each small section himself—imagine, more than ten sections weekly! In addition, each student met with him personally during office hours. It was this class that reaffirmed to me Brown’s renown as a premier institution for undergraduate teaching.

Reading and sharing intellectual experiences are great, but why not give incoming students a choice of three or four books (“Assignment,” Elms, September/October)? Brown has no distribution requirements, encourages students to define their own majors, and, of course, choose their own courses. Seems incongruous to push a single book to the entire incoming class. Is there a danger of mass indoctrination?

As I read “Class Action,” I felt enormous pride and admiration for my fellow alums. Knowing how capable, accomplished, and committed are Tanya Hernandez ’86, Robin Lenhardt ’89, and Kimani Paul-Emile ’93 gives me confidence that the Center on Race, Law and Justice at Fordham University will be an invaluable instrument in making our nation a fairer democracy and a more perfect union.

Thank you so much Tanya, Robin, and Kimani for your selfless contributions. You’re changing people’s lives for the better and bending the arc of history in a direction that’s closer to justice.

The website for the film by Sam Karp ’96 is www.healedthefilm.com

The e-mail address for sending class of 1966 updates to Ken Golder is kengee@alumni.brown.edu

Alexandra Curtis does not hold an MPA degree, as was reported in “A Vision of Beauty” (Classes, September/October).

The correct e-mail address for Ruth Loew ’72 is rcloew@gmail.com