Actress Meredith Baxter, looking weary, sits on a kitchen stool surrounded by health supplements. George Takei, of Star Trek fame, is engulfed by holiday wrapping paper and presents. Broadway choreographer Tommy Tune—tall, lanky, and dressed entirely in white—reclines on his Upper East Side penthouse terrace, talking on his cell, with Manhattan’s skyscrapers behind him and his reflection shimmering in a window. 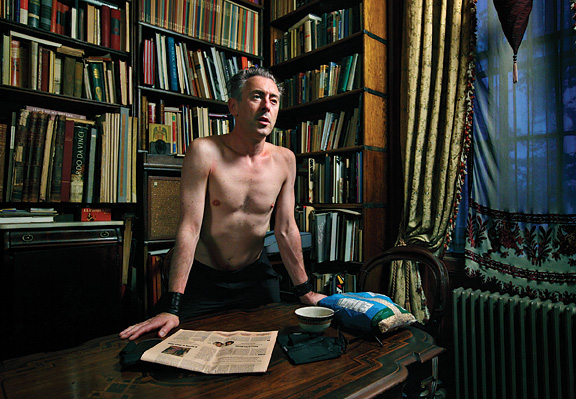 These are among the many memorable, often slyly humorous images in Kings and Queens in their Castles by Tom Atwood ’94. Atwood includes portraits of about sixty celebrities, as well as roughly 100 other people: farmers, doctors, lawyers, beekeepers, bankers—even a dinosaur paleontologist—all of whom identify as lesbian, gay, bisexual, transgender or queer. The book, published in March, is available at www.TomAtwood.com/kings-queens .

Earlier photo series of gay men, Atwood notes, “focused on younger, beautiful subjects with their shirts off, romping through the forest.” Instead, he wanted to make “more contemplative, serious images,” including some commemorating older men who had survived the HIV/AIDS epidemic.

“By photographing people at home in their native environment, I’m capturing a sense of who they are,” he says. “A lot of the moments are not planned. I set up lights and choose a corner to shoot in. I start talking to [the subjects] and see what evolves.” 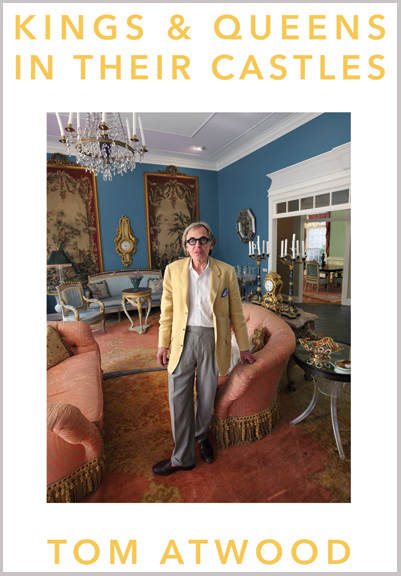 Now based in New York City, Atwood says he was born on “a dirt road in the woods of Vermont,” and retains a love of rural life. He often depicts subjects interacting with their pets, for example, Randal Kleiser, director of the movie Grease, being nuzzled by a horse alongside his swimming pool as his pet goat looks on.

A self-taught photographer, Atwood has won numerous awards for his images, which have been exhibited at the Museum of Modern Art. He has dabbled in acting, painting, and sculpture; at Brown, where he concentrated in economics, he sang with the Brown Derbies. He transferred to Harvard after two years, in part to take architecture courses, and he holds a master’s degree in European Studies from Cambridge University.

“I like to compose photos that are beautiful like paintings,” Atwood says. His photos are filled with shadows and reflections, gestural echoes, and glimpses of landscape reminiscent of Renaissance portraits. He says he uses a wide-angle lens “to get as much into the frame as possible.”

His work also marks a cultural shift. A decade ago, he says, LGBTQ people wanted to show that “we were just like everybody else.” Atwood says he now feels freer to assert the presence of a “gay sensibility” associated with creativity and the avant-garde: “My style has a hint of camp in celebration of this.”

Reader Responses to At Home