Jennifer Cheng ’05 was not at her best when she learned that Claudia Rankine, winner of the National Book Critics Circle Award for Citizen, had picked Cheng’s debut for the 2015 Omnidawn 1st/2nd Poetry Book Prize. 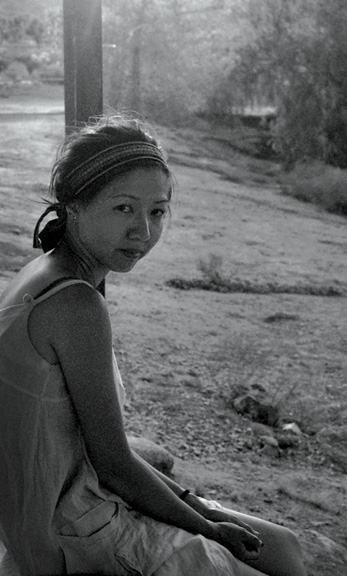 “The phone call from the publisher came to me at night during the winter while I was visiting my parents in Texas,” Cheng says. “I was enveloped in bed with the worst flu I have ever had—I barely had a voice, and everything was a heavy fog, but I do remember the phone call.”

Cheng, who lives in San Francisco but grew up in Texas, Hong Kong, and Connecticut, has long been an admirer of Rankine’s work. “Even now when I think of Claudia reading my words,” she says, “I feel overwhelmed.”

House A is a three-part constellation of poems and tiny lyric essays about dislocation, diaspora, and how the undercurrents of history wind through our ideas of identity and home. It opens with “Letters to Mao,” a series of epistolary prose poems, followed by “House A; Geometry B,” a dreamlike glossary that slips around questions of space and architecture, and then “How To Build an American Home,” which pairs blueprints and diagrams with brief shards of text. As she worked on these sections, Cheng began to see that they were each “orbiting the same center, an investigation of home.”

About House A Rankine wrote: “Not since Michael Ondaatje’s Running in the Family and Calvino’s Invisible Cities have I encountered such attention to the construction of love and love’s capacity to transform unimagined locations.”

Cheng’s family is originally from Suzhou, China, though her mother had migrated to Taiwan and her father to Hong Kong before coming to the United States. Cheng says she addressed the opening poems to Mao because he felt like a hidden presence while she was growing up.

“He was such a phantom in my childhood home, both deeply intimate and far away, like history itself,” she says. “It felt important to write to Mao about the afternoon sunlight in our Texas house, the mythology of homeland, my uncle in jail, the sound of my mother’s feet on linoleum—the wholeness and holeness of an immigrant home.”

Chen has an MFA in nonfiction from the University of Iowa and another in poetry from San Francisco State. But she doubts that House A would even exist if during junior year at Brown she hadn’t found herself in two classes—Lyricism and Lucidity and the Art of Literary Nonfiction—taught by poet Catherine Imbriglio, a senior lecturer in the Nonfiction Writing Program.

“They started everything for me,” Cheng says of Imbriglio’s classes. “Catherine showed me a language I had been looking for, leaning toward, my entire life without knowing it.”

This past semester Imbriglio taught House A in her Lyricism and Lucidity class. “Jenny was and is an inspiration,” she says. “Her writing is luminous.”