For Jews who strictly observe Jewish law, Brown has become much more practical to navigate on the Sabbath. At a Brown RISD Hillel ceremony in April, community members dedicated an extension of the Providence Eruv—a symbolic perimeter that allows those within it who follow Jewish law, or halakha, to forgo some of the restrictions on carrying objects imposed during the Jewish Sabbath. 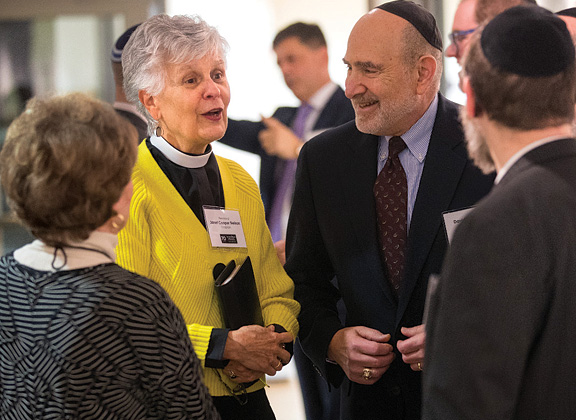 “This is a moment many years in the making,” says Marshall Einhorn, Brown RISD Hillel’s executive director. “It further signals that both Brown and RISD are environments in which Jewish students of all backgrounds and traditions can thrive.”

An eruv allows observant Jews to walk outside on the Sabbath while pushing strollers or to carry such objects as house keys and prayer books as they walk to synagogues or other community gatherings. An eruv set up according to Jewish law in effect transforms public space into private space, lifting restrictions on carrying objects within its borders.

Established thirty years ago, the Providence eruv encompasses much of the city’s East Side and adjacent parts of Pawtucket. Its border, which to the west is the Providence River, is marked by a thin wire strung between telephone and electric poles and does not include College Hill. To design and engineer an eruv extension, Brown RISD Hillel worked with multiple partners, including Marc Diamond ’81, ’84 MD, the long-serving chair of the Providence eruv, and Fred Horowitz ’86, a Hillel trustee.

“The concept of an eruv,” Brown’s associate chaplain for the Jewish community Rabbi Michelle Dardashti says, “is designed to establish parameters of communal Jewish space and thus increase the ability to engage in the mitzvah of oneg Shabbat, the command to enjoy the Sabbath.”

At the April 4 ceremony, a plaque containing a silver dollar was presented to Providence Mayor Jorge Elorza by Diamond and Rabbi Yechezkel Yudkowsky of the Providence Eruv Corporation. It is a symbolic payment to the city for the extension of the eruv.

“We recognize the arc of Rhode Island’s early rise as a bastion of religious liberty,” President Christina Paxson said at the event, “and we affirm College Hill as a crossroads of many faiths—a place where the eruv will also encompass calls to Muslim prayer, Christian church bells, and Buddhist chanting. It is all about inclusion.”

Reader Responses to Freedom of Religion