The seventy images in Lois Raimondo’s Fractured Spaces: Stories of Resistance and Resilience, which is on display at the Watson Institute through May 31, feature unguarded moments of humanity: the wary eyes of a mother carrying her baby through the streets of Sadr City; the forced impassivity of a young explosives officer making his way to a target in Fallujah; the disbelief of a man recognizing a corpse as that of his brother; the happy abandon of two girls dancing in their prison. 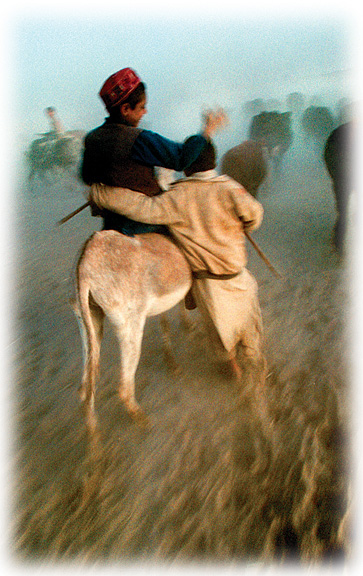 Or the image at right, a photograph that at first shows humans and animals wading upstream in a river of sand but that on a closer look reveals a pair of boys laughing and clinging to each other in a fierce dust storm while trying to gather their scattering herd.

“It’s easy to photograph deprivation in a refugee camp,” Raimondo says. “But what I loved about that moment was finding these two kids, displaced from their homes in different villages, doing a job and laughing with each other. They weren’t thinking they were refugees. This was a moment of joy.”

Raimondo’s four-part installation zeroes in on communities in Iraq, Afghanistan, and Pakistan that have been disrupted by conflict, as well as on the 90,000 Tibetans living as refugees in Dharamsala, India.

Sarah C. Baldwin is a member of Art at Watson, which brought Fractured Spaces to Brown.

Reader Responses to Moments of Hope