As an undergraduate, when Catie Curtis ’87 was on the women’s basketball team, she’d sometimes play a few songs on road trips. “I was very shy,” she recalls. “I wasn’t really the performer type. I was just quietly playing my guitar, and the other players would gravitate to it on the bus. It was a way for me to connect with people.” 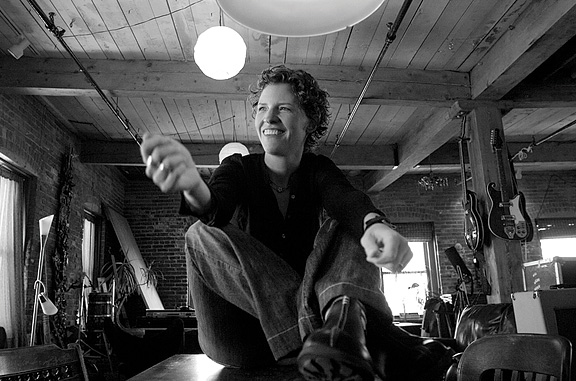 Compass Records
After two decades on the road, Catie Curtis will kick back and stay home.

On campus, Curtis was a regular at the Underground, listening to her fellow students perform. And she remembers going to some inspiring concerts at Brown, including one by Suzanne Vega: “I thought, Oh my God, this is what I want to do. She’s telling stories; she’s playing these thoughtful songs. It was perfect.”

Curtis began to write and perform her own songs, completing a cassette-only collection called Dandelion two years after graduation. Two CD releases followed, and recognition of her talent grew, culminating in her signing by the major label EMI in 1995. Twenty-two years, a dozen albums, and hundreds of shows later, Curtis has announced that her current tour, dubbed The Final Outing, will be her last.

“I know it’s the right decision,” she says. “There’s a little sadness going to these shows, knowing I’m doing them for the last time, but it feels good to be making this choice when I’m ready, on my own terms.” Her current tour follows the release of While We’re Here, a well-crafted eleven-song album that explores the complexity of human relationships, from the joy of new love to the pain of breakups and the death of a loved one. The title song is the emotional centerpiece—a celebration of life that proclaims: “We could all die tomorrow / I’m not gonna live in fear / Don’t ever stop giving living a shot / While we’re here.”

Curtis’s decision follows a major shift in her personal life: her 2014 divorce from her partner of seventeen years. She is now raising the couple’s two daughters, both teenagers; spending more time at home with them, she says, was an important motivation for getting off the road. She is now in another relationship, with a woman who lost her husband four years ago.

“Experiencing her grief secondhand made me recognize how important it is to live without the presumption of decades ahead,” Curtis says. “It’s important to let those painful experiences influence what you’re willing to do and what you want to do.”

For Curtis, finding what she wanted to do included realizing that the constant grind of touring was not a requirement for working as a creative artist. She will continue to write songs and perform online, and she’ll appear at benefits and private events. She has been producing songwriting retreats for the past five years, and she plans to do more, expanding the focus to include other forms of self-expression. Her goal, Curtis says, is to help people “open up that fire in them” by “connecting around creativity rather than performance. I look forward to doing that more.”

Reader Responses to The Last Waltz