The Women of Brown
A May conference on campus celebrated 125 years of women at Brown.

A trio of campus events this spring highlighted an arc of women’s leadership at Brown, past and present. 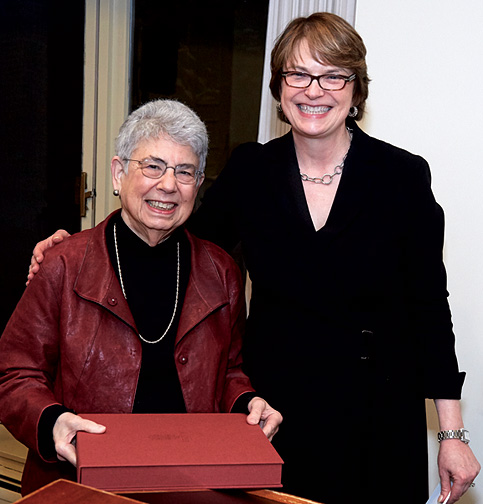 Hank Randall
Nancy L. Buc '65, left, has been a fierce champion of women at Brown.

In February, the Pembroke Center for Teaching and Research on Women hosted a dinner celebrating a successful Archives Endowment campaign that will enable the Center to maintain two historical archives. The event paid tribute to Nancy L. Buc ’65, a fierce champion of women at Brown whose vision and philanthropy were central to the Archives project.

Buc’s leadership, like that of many women leaders of her time, was rooted in a broader struggle for equality. There was a principled audacity about it, an irreverence aimed at bucking conventional wisdom and fighting the powers-that-be.

As a sophomore, Buc, an early civil rights advocate, led Pembroke students to support the enrollment of James Meredith’s enrollment at the University of Mississippi. And during her long service on the Brown Corporation, she consistently promoted equality and inclusion for women and minorities among faculty, students, and staff.

The 1960s was an era when securing equality in pay, faculty appointments, promotion and tenure, or advisory panel membership had to be a priority for women, because such equality was hard, if not impossible, to come by. At Brown, it was an era that culminated in a Title VII sex discrimination class action launched by professor Louise Lamphere, whose leadership changed the course of women’s faculty representation at the University.

Forty years after the 1977 settlement of the Lamphere case, audacity and irreverence infuse women’s leadership at Brown. Now, though, the struggle is less about equal standing and more about academic strength and advancing groundbreaking knowledge that has impact in the world.

In April, Brown hosted a symposium on Inspiring Women in Science that showcased the work of six internationally acclaimed women scientists, including Brown professor and founding director of the Institute at Brown for Environment and Society, Amanda Lynch.

Her talk, Sea Ice and the Polar Vortex, was a window into her bold scholarship on adaptive environmental governance in vulnerable Arctic communities affected by climate change. For her, eliciting indigenous views of what retreating ice means to herding and fishing populations helps researchers inform resilient policies that serve a locally-defined “common good.” The talk captured the creativity, intellectual independence, and social consciousness that so many women have brought to Brown in the decades since the Pembroke era.

Other researchers breaking new ground include Diane Lipscombe, director of the Brown Institute for Brain Science, who seeks potential ALS breakthroughs, and economist Justine Hastings, who researches public policy behind food stamp benefits and student loan programs. Today, women at Brown lead by modeling the curious, collaborative, innovative teaching-and-research culture that we believe fosters excellence and opens doors to discovery. They lead not because they are women but because they are exceptional in their fields, and are generating knowledge of consequence to human experience.

Finally, a conference celebrating 125 Years of Women at Brown convened in early May. Generations of alumnae gathered to celebrate the contributions women have made, and still make, to the University.

Amid all the progress, challenges hearkening back to the era of Nancy L. Buc and Louise Lamphere remain: women still make up only 30 percent of Brown faculty, with particularly low representation in STEM fields. Yet, when Fed chair Janet Yellen ’67, U.S. Senator Maggie Hassan ’80, Pulitzer prize–winning playwright Lynn Nottage ’86, and other women leaders took their turns at the podium, the full measure of what women’s leadership has long meant to Brown was evident to all.

Reader Responses to The Women of Brown