For most Americans, mead is an exotic beverage right out of Game of Thrones. But for Raphael Lyon ’98, the founder of New York City’s first meadery, it’s a deep-seated—and distinctively delicious—passion. 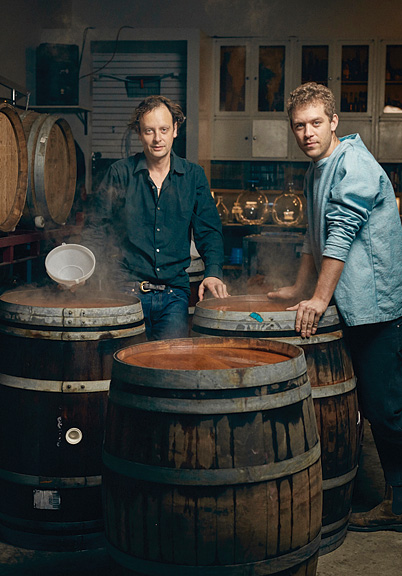 “There’s no reason to associate mead with old England,” Lyon says. “People have been drinking mead around the world for a while, and most mead is now drunk in Africa.”

Lyon, who grew up in New Mexico and New York and double-concentrated in semiotics and art at Brown, first started making mead in 2009. Mead is created by fermenting honey with water, leading some people to call it “honey-wine.” Mazers, or people who make mead, create unique flavors by adding fruits, spices, grains, or hops. At first, Lyon produced the mead in his family’s Hudson Valley barn, pursuing music in his spare time. “I’ll tell you a dirty secret of the new alcohol movement,” he says with a laugh. “In large part, the people are either musicians or semiotics students. Or both.”

Lyon markets his mead under the business name Enlightenment Wines, a name that conjures up the cultural movement that swept across Europe in the eighteenth century. “There are kind of two senses of enlightenment that you can draw from it,” Lyon says. “I’m relating more to the Western, European side of it, which involves thinking things for yourself.”

“Wine is one of the most conservative industries on the planet,” he adds. “It’s drenched in notions of tradition and the way things are supposed to be done. But when you’re talking about something like mead, it’s an open space where I don’t have to pretend that I’m reconstructing a recipe from the tenth century. You start over in a lot of ways.”

Visitors to Honey’s can expect to have their taste buds taken on a wild ride. The current menu features such offerings as “Saturnalia” (apple mead with lemon verbena that has been aged in a barrel since late 2014) and “Dagger” (mead with tart cherry, yarrow, chamomile, and foraged hemlock).

For those who would rather stick to the familiar, Honey’s also provides a selection of cocktails, beers, and “grape wines.” But even some of the cocktails deviate toward the unexpected, like the “Ocean Martini,” a twist on the classic martini that’s made with real seawater and autumn olives.

The cocktails are the brainchild of Arley Marks, Lyon’s longtime business partner. The two first met in Providence, shortly after Lyon graduated from Brown and Marks from RISD. They reconnected several years later, when Lyon took a field trip to Providence as an MFA student at Columbia.

These days, Marks handles the cocktail creation, while Lyon is responsible for securing the ingredients and silk-screening the bottle labels. Enlightenment Wines has partnerships with several small farms in upstate New York, where Lyon often travels to forage for additional ingredients or garnishes.

Looking ahead, Lyon hopes to keep advancing Enlightenment Wines and contributing to mead’s rapid expansion into the American beverage industry. According to the American Mead Makers Association, mead is one of the fastest-growing alcoholic beverages in the country by sheer number of new producers.

Lyon sees a common thread of hands-on learning running through all his past and future endeavors, including his time on campus. “A lot of the things I do today, I learn by doing them,” he says. “It’s an important part of my practice as a winemaker, that I’m constantly experimenting and trying to figure out for myself how things work.”

Reader Responses to Mead in Brooklyn