Austin Martin grew up in San Diego listening to hip-hop, which he says became embedded into his identity. Meanwhile, as a black kid who attended private school and had college-educated parents, he wanted to find a way to create for others the kind of opportunities he’s enjoyed. “I’ve seen what happens with the absence of educational opportunity in my community, family, and friends.” 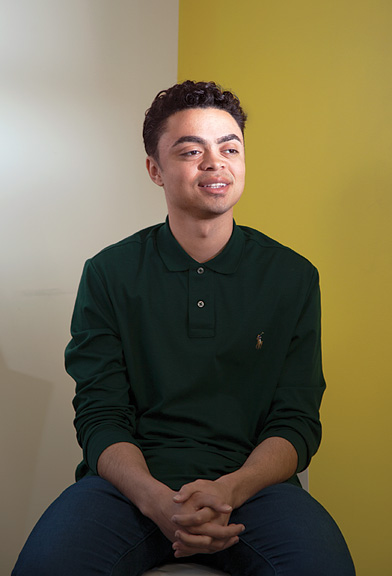 At Brown, Martin combined his passions by founding a start-up—Rhymes with Reason—that uses rap to enhance the vocabularies of minority students. “For many black and brown youth, hip-hop is an art form that has given us a voice in this society,” Martin says. “We see ourselves in the stories artists tell.”

Martin, a business entrepreneurship and organization concentrator, first thought of the concept in the fall of his freshman year, during a talk by a RISD senior who had started a company that teaches math through NBA statistics. Martin sat on the thought until summer. Then one day, as he watched a rap show on television with his family, his father reminded him of the idea.

“He told me, ‘You have something that could change millions of kids’ lives and you’re sitting here right now watching TV,’” Martin recalls. “That was the moment I decided to put 110 percent effort into Rhymes with Reason.”

Martin quickly developed a product using digital flashcards and, later, a website. By the spring of his sophomore year, he’d honed his concept through a partnership with the Swearer Center as a social innovation fellow. That summer, he ran an extended ten-week pilot program in a public school.

Students were assigned such words as distort or meticulous and given a chance to listen to clips of rap songs in which those words are used. After being provided with the definition, they were given the chance to write and perform their own lyrics using the words.

Within an hour that first day in Detroit, students from an underperforming class had mastered fifteen SAT vocabulary words. And for the first time, they asked their teacher to assign them homework—more Rhymes with Reason. Each student took a vocabulary pretest at the start of the ten week program and another test at the end. The average score improved from 22 percent to 70 percent. “After that, I started to feel a sense of responsibility,” Martin says. “I felt that I had stumbled upon something that really has the power to help so many kids.”

He plans to pursue the venture full time after graduation. Since the pilot in Detroit, Rhymes with Reason has reached more than twenty schools across the country, from California to Ohio.

“I want to get Rhymes with Reason in every urban school district throughout the country,” Martin says. “And that’s what I’ll be working towards for the foreseeable future.”

Reader Responses to The Education MC