Robert De Niro is not the kind of actor who takes an academic approach to his craft. At a Commencement forum billed as “A Conversation with Robert De Niro,” a typical exchange between him and modern culture and media chair Lynne Joyrich ’84 AM, ’90 PhD, went something like this: 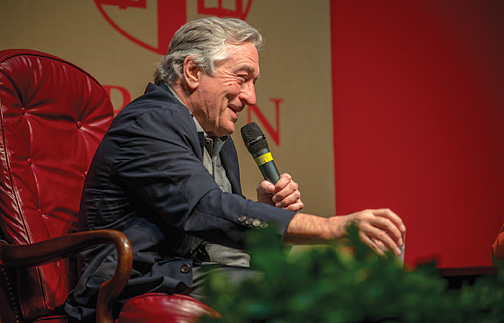 Joyrich: How much creative input do you typically have on a film?
De Niro: Depends.
Joyrich: What does it take to work in genres you’re not used to or take on roles that aren’t your usual fare?
De Niro: What it takes is if you wanna do it, you try it.

When Joyrich asked about changes he’s seen in the industry over the years, De Niro mentioned that television has changed a lot—it used to be something low-quality, a medium a serious actor might prefer to avoid. These days, he said, “sometimes there’s better quality in television than what’s presented in film.”

When an alum asked both speakers during the audience question period for their favorite current TV show, De Niro confessed to a certain fascination with CNN, thanks to what he called “the nightmarish situation” of the Trump presidency. “The only thing I watch is CNN,” he said, “because every day something new happens. I have to get my work done, but I have to see what this idiot has done [today].”

A celebrity himself, De Niro then attacked celebrity culture and advised the audience, which included some class of 2017 graduates, “Don’t be famous for being famous.” It’s a sentiment that goes against current trends, he admitted: “Now we have a lot of people who are famous for being famous. We have a president now who is here because he was on one of those shows, and where are we?”

De Niro recounted the May 22 incident in which the president told a group of Israelis, in Israel, that he’d just gotten back from the Middle East. According to media reports, Israel’s U.S. ambassador had actually put his palm to his forehead in reaction. De Niro mimicked the gesture, and the audience laughed.

Reader Responses to A Ridiculous Situation