Many researchers believe that if policy makers knew as much as researchers know, they would make policy that researchers would like. When things don’t work out that way, the researchers assume that ignorance (or worse) on the part of policy makers is to blame. People who study science communication call this thinking “the deficit model.” It does not come close to explaining what goes wrong when science and politics meet. 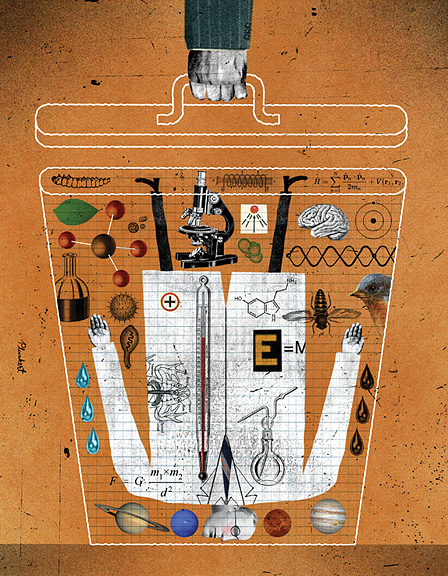 Of course, sometimes ignorance is the issue. There are government officials and policy makers who are ill-informed or uninformed. Some of this ignorance can be attributed to researchers who, overall, make few if any efforts to explain their world to the public or to public officials and who, as a group, disdain the hurly-burly of politics. Many think colleagues who engage politically have somehow tainted themselves or abandoned the objectivity of the lab.

So it is not a surprise that, according to the Congressional Research Service, fewer than 10 percent of members of the House and Senate in the 114th Congress of the United States (in office in 2015 and 2016) were scientists or engineers. That’s not very many, especially when you realize that figure included the optometrist in the Senate and seven software company executives (two in the Senate and five in the House). There were eight engineers, all but one in the House, which also boasted a physicist, a microbiologist, and a chemist. The others in this group were healthcare providers: eighteen physicians (all but three in the House), four nurses, three dentists, three psychologists, and a pharmacist—all in the House. By far, the professions most heavily represented were public service (i.e., politics), law, and business. (One senator, the Congressional Research Service notes, was “a comedian,” presumably Al Franken, the Minnesota Democrat and former Saturday Night Live cast member.)

But ignorance of science is only one of many problems that stand in the way of making sensible government policy.

In the first place, many questions that people describe as issues of science are not science questions at all, but rather hinge on deeper beliefs and values. Some examples are obvious. Your views on the therapeutic use of human embryonic stem cells are likely to rest on your ideas of the moral status of the human embryo. Others are less obvious. People think that the climate question is one that science can answer. But in a larger sense, the answer depends on whether you think people living today have obligations to leave Earth more or less intact for generations after us. That is not a question science can answer.

Politics and policy making are not a search for the technically correct answer to this question or that. They involve debates over advancing our social aspirations—social welfare, national security, support for the arts, economic prosperity—through a process of negotiation, log-rolling, and political action. But politicians understand that Americans have great respect for scientists and engineers. So they say, “The science is on my side.” When people confront scientific or other technical information that might conflict with dearly held business goals or ideologies, however, they have a number of ways to quash it.

First, they may deride it. Many creationists, for example, deride evolution as “just another theory.” Climate deniers describe researchers in the field as somehow perpetrating a lucrative hoax. They may target individual scientists for “investigation.” The most famous victim of this tactic was Michael Mann, the climatologist at Penn State whose description of the rising curve of Earth’s temperature has become known as “the hockey stick.” In a disgraceful episode, Republicans in Congress tormented Mann with subpoenas for e-mails, lab records, and other documents, as well as demands for testimony. A specially convened panel of the National Academy of Sciences cleared him of any scientific wrong-doing.

Or politicians may pack scientific advisory committees with people appointed for their political or religious views rather than their scientific or engineering expertise. This practice is not limited to Republicans, but it was a hallmark of the administration of George W. Bush, and it may be a Trump tactic as well.

More dangerously, people opposed to policies based on science may claim that the situation is uncertain or may cook up controversy where none exists. This tactic has become one of the most effective weapons in the arsenal of those seeking to elude government regulation. The Surgeon General declared in 1964 that smoking cigarettes produced lung cancer and other harms, but cigarette company executives banged the uncertainty drum relentlessly for decades, asserting that there was not enough evidence to say what epidemiologists had been saying for half a century.

Climate deniers invoke uncertainty to argue that we don’t know yet whether acting to reduce emissions of greenhouse gases is worth the widespread economic disruption they say a carbon tax or other measures would cause. In doing so, they magnify the uncertainty over human-induced climate change—there is some, but not any that matters in this context—and they magnify the observation that shifting to a carbon-free economy would be an economic disaster.

The most pernicious maneuver in the realm of science and politics is the deliberate, flat-out suppression of information by factions that find it politically unpalatable. Gun control is an excellent example. About a third of U.S. households are armed, and guns cause 30,000 deaths in our country each year. Given these figures and gun control’s prominence as a subject in so many political debates, you might think that gun safety and related issues would be matters of robust ongoing research. But they are not. For more than two decades, the National Rifle Association has led a successful campaign to bar the use of federal research funds for studies of gun violence.

The effort took off in 1993, after the New England Journal of Medicine published a research report, “Gun Ownership as a Risk Factor for Homicide in the Home.” The researchers had studied almost 2,000 homicides in three urban counties, almost a quarter of which had occurred in the home of the victim. After controlling for such factors as illicit drug use in the home and the presence of a person with an arrest record, they found that, far from conferring safety, “keeping a gun in the home was strongly and independently associated with an increased risk of homicide.” They added, “Virtually all of this risk involved homicide by a family member or intimate acquaintance.”

But we don’t know if their results hold up, because their research has not been replicated. In the wake of their paper’s publication, the National Rifle Association began a campaign against the agency that financed the work, the National Center for Injury Protection, an arm of the Centers for Disease Control and Prevention. In 1996, Congress passed an appropriations bill explicitly barring the use of injury prevention funds “to advocate or promote gun control.” The measure cut the agency’s budget by exactly the amount the agency had spent on gun-related research the year before.

When researchers at the National Institute on Alcohol Abuse and Alcoholism embarked on related research, Congress extended the restrictive language to all agencies of the Department of Health and Human Services, including the National Institutes of Health. In the wake of the Newtown, Connecticut, school shooting, President Barack Obama called for research on gun violence and money to support it. But he added that the work must be done “in accordance with applicable law.” And because the NRA opposes any research it regards as “politically slanted,” we may never know whether the presence of a gun in the home really makes it more or less dangerous.

Since the end of the Cold War, there has been something of a decline in the government’s in-house scientific infrastructure. For example, Congress’s Office of Technology Assessment was abolished in a round of budget cuts pushed through by Newt Gingrich when he was Speaker of the House. That agency had its critics, who complained it took too long to produce its thorough reports, but its death left Congress with relatively few other resources. The Congressional Research Service and the National Academies, the congressionally chartered organization of scientific, medical, and engineering eminence, both move so slowly that their reports are sometimes moot before they have been issued. Also, expert panels convened by the Academies strive so mightily for consensus that they often produce somewhat mealy-mouthed assessments whose more forceful conclusions relate to the need for more money for research—valid, but hardly the point.

The second Bush administration marginalized the White House Office of Science and Technology Policy, cutting its staff, demoting its chief, and moving its offices from the Old Executive Office Building, next to the White House, to the Siberia of rented quarters outside the White House ambit. Eventually, researchers began referring to the whole operation as “a false front.” President Obama brought the office back into the White House. Now Trump appointees talk of abolishing it.

By then, some researchers had begun organizing to bring the voices of more scientists and engineers into public debate. One such group was Scientists and Engineers for America. Its goal was the promotion of sound science in government policies and the support of political candidates with scientific or technical expertise, regardless of their party affiliation. It was chronically short of funds and went into abeyance in 2012.

Meanwhile, two physicists, Representative Bill Foster, an Illinois Democrat, and Representative Vernon Ehlers, a Michigan Republican, were organizing a group that eventually became Ben Franklin’s List. The two men were leaving Congress—Ehlers because he was retiring and Foster because he had been defeated by a Tea Party Republican. Their idea was modeled on EMILY’s List, which supports political candidates favoring abortion rights. (EMILY stands for Early Money Is Like Yeast—it can help get a nascent political campaign off the ground.) Foster and Ehlers chose Ben Franklin because he was a patriot and a scientist.

Their idea, they said when I interviewed them about the organization, was to encourage scientists, engineers, and others with technical expertise to run for political office. They said their decisions about whom to support would be based solely on technical credentials, not political or other views. The group would be nonpartisan and would bank on the widespread belief that, as a group, scientists tend to be Democrats and engineers tend to be Republicans.

But their effort also faltered, especially when Foster decided to run for Congress again in 2012. He was elected—but today he is the only PhD scientist in Congress.

Cornelia Dean, a science writer for the New York Times, is Distinguished Visiting Lecturer in Environmental Studies and Writer-in Residence at the Institute at Brown for Environment & Society.
Illustration by David Plunkert
What do you think?
See what other readers are saying about this article and add your voice.

Bina Venkataraman ’02 on why it’s more important than ever to plan ahead—and how to do it.
Ever True

A sip of wine when pregnant? TV for toddlers? Professor Emily Oster crunches the data and encourages parents to relax.