The good news about social media, according to Mother Jones Washington bureau chief David Corn ’81, is that sites like Twitter and Facebook have allowed stories from such publications as Mother Jones and the Nation to find so many new readers. 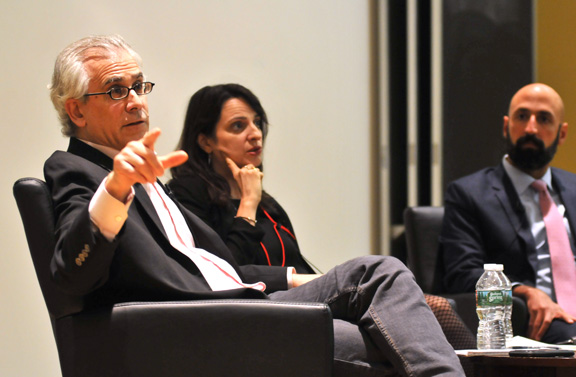 Frank Mullin
David Corn '81, Alissa Quart '94, and Professor Elias Muhanna talk about how to recoginize fake news when you see it.
“The bad thing,” he added in May at the Commencement forum called “The Impact of Social Media on Politics, Culture, and Scholarly Communication,” is that now anyone has a shot at widely disseminating a story. “Bad information, which often costs nothing, travels these byways as easily as good information,” Corn said. As a result, during the recent presidential election, he said, “the biggest trafficked stories were fake news.”

Social media has also sped up the news. These days, he said, there are so many news cycles in a day that the result is exhausting and shallow, and social media consumers can seem like “packs of animals just chasing shiny objects all day” unable “to have the type of conversations we need.”

All of which, according to Corn, underscores the need for investment in rigorously reported news, which means to “pay for news information that is good, that is solid, that does cost a lot of money to produce.” Ensuring access to higher education for more people is also essential for giving people the tools to assess all the information that’s out there online. “There is a pattern,” he said, “between education and how you absorb information.”

Alissa Quart ’94, executive editor of the Economic Hardship Reporting Project and author of Republic of Outsiders and Branded, added that in addition to subscribing to publications, it’s important to donate to nonprofits like hers that fund careful reporting. As local and regional news organizations in Rust Belt states have been forced by economic conditions to close down, the project has been funding local reporting.

“If we can address these news deserts, we can try to counter the effect of false news via social media in the heartland,” Quart said. “I believe in the power of real and deep journalism.”

Elias Muhanna, the Manning Assistant Professor of Comparative Literature at Brown, argued that social media may hold the key to the solution to the problems it has created. “Not all of social media is short-attention-span media,” Muhanna said. Facebook, Reddit, and the blogosphere have “the ability to provide a kind of long-attention-span form of social engagement that we don’t have in face-to-face communications. Digital forums actually create an environment where you can have hundreds of thousands of people participating in a conversation at the same time.”

He pointed out that Brown professors try to teach their students to think critically: “We want them to leave our classes with well-developed skepticism.” This is perfect for distinguishing between real and fake news. But it has limits: deconstructing the news doesn’t help us figure out how  to build a better world.

“We just have to find ways of leveraging the potential of these platforms to figure out how to put the world back together,” he said, “rather than just using them to take apart the narratives that are out there.”

This is new ground, for sure, Muhanna said: “There has never been a moment in the history of our species when somebody could think something—not even say it—and move their fingers, and, within twenty minutes, 200 million people across the country could have read it and have thought about it.”

Reader Responses to Fake But Free