What It Means to Be "Good"

Growing up Irish Catholic outside Boston, Katie Bayerl ’00 had a vague image of Mary and other saints as subservient worshippers of God—the perfect image of what a good girl should be. That changed after she traveled to the Dominican Republic as an education studies concentrator at Brown and then studied African women saints of the Santería religion. She fell in love with such ferocious women as Santa Marta, who was known for slaying serpents and bringing wayward lovers to heel. 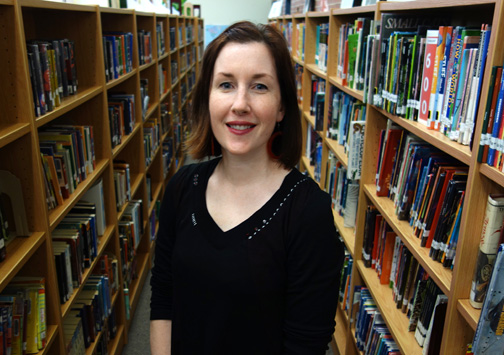 Frank Mullin
Katie Bayerl '00 thought she was done with teaching until she started writing again.

“She could be fierce, but she was also fiercely loyal,” says Bayerl. “Seeing someone who combined these traditionally feminine qualities along with qualities that weren’t considered virtuous was just fascinating to me.” That realization spurred a lifelong obsession, as Bayerl began collecting images and stories of female saints around the world who didn’t fit into the docile stereotype.

Eventually that obsession led to Bayerl’s first young adult novel, A Psalm for Lost Girls, which was published in March. The story centers on Tess, a New Avon, Massachusetts, teenager who hears divine voices. After her sudden death, the town’s residents clamor to make her a saint, while her rebellious sister Callie pushes back, insisting she was just a regular girl.Throughout the novel, Bayerl weaves in the story of a mysteriously kidnapped third girl, who may or may not have been saved by Tess’s divine intervention, opening up questions of faith not just in God, but also in the people around us.

During her own teen years, Bayerl struggled with what it meant to be a “good girl.” Academically gifted, she felt pressured to live up to the high standards set by the adults in her life; at the same time she was teased and bullied by other kids. “I never knew whether my talents were something to be proud of or something to be ashamed of,” she says. She started coming to terms with that conflict during high school when she tutored and mentored younger girls.

During her years on campus, spent every semester working in Providence and Pawtucket schools, and after receiving an MAT from Tufts, she began teaching public high school in Boston. She became disillusioned, however, with the lack of support for both teachers and students. “I got a lot of pushback from administrators who said you are trying too hard, wait until Christmas and a lot of these kids will be gone.” She left teaching—for good, she thought—and began writing for teens instead, earning an MFA in Writing for Children & Young Adults at the Vermont College of Fine Arts.

Even as she was finishing her book, however, she began working with teens again through the Boston writing center Grub Street, where she’s been an instructor for the past three years. The ability to interact with teens part-time while also writing has provided the perfect balance, allowing her to shape young minds and connect with her own teenage self.

“There is no place I’d rather be than inside a teen’s head,” she says. “They are at the stage in their lives where they just want to get to the heart of it and speak truth, and there are no excuses for injustice or hypocrisy. In my heart of hearts, I am still that teenager.”

Reader Responses to What It Means to Be "Good"