Before they’d even met, professor of engineering and physics Maurice Glicksman made a big impression on his future colleague, professor of engineering Harvey Silverman ’68 ScM, ’71 PhD. When Glicksman arrived at Brown in 1969, Silverman says, “The scuttlebutt among graduate students was that there was this new, really, really powerful guy from RCA Labs coming in as a professor of electrical engineering. All the faculty were scared to even interact with him.” Silverman, then a mere grad student who happened to have the office across the hall from Glicksman, dared to say hello and discovered a shared interest in bridge and a shared culture as conservative Jews. Glicksman, who died on May 26 at 88, became a friend, mentor, bridge partner, and role model to Silverman for nearly five decades. 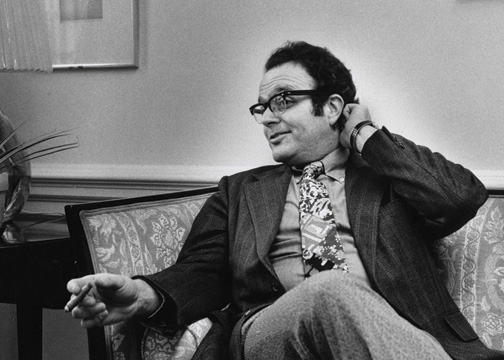 After 15 years at RCA Labs, Glicksman taught at Brown for 25. After all that time at RCA, for which, among other things, he set up and directed its labs in Tokyo, Glicksman wanted to switch to neuroscience, according to the memoir Glicksman contributed to the Brown Faculty Bulletin in 2014. “But Brown wanted me to help develop electrical sciences in engineering,” he wrote, “and I found two other physicists engaged in developing neuroscience and not needing my help. Hence, I stayed in the semiconductors field.”

He made a big impact, says colleague Arto Nurmikko, a professor of engineering and physics. “Through his research, Maurice Glicksman became one of the pioneers in advancing fundamental semiconductor sciences in the 1960s and ’70s ,when the challenge was to understand the electrical conductance of semiconductors such as silicon and germanium at high-electron densities.” Glicksman’s insights, Nurmikko says, helped lead to “the astonishing acceleration in the pace of development of transistor technology toward modern microelectronics.”

It was Glicksman’s interest in research that drew him to academia and, after refusing an industrial operational leadership job, he thought he’d steer clear of administration, even in a university setting. It was not to be. He soon joined faculty committees and became one of Brown’s most respected leaders, serving as a dean starting in 1974 and then as provost from 1978 to 1990, where the scent of his trademark cigars lingered in the air on the first floor of University Hall. “His office stunk like hell,” remembers Silverman.

In addition, Glickman had leadership roles at more than 20 different organizations, including Miriam Hospital, Lifespan Corporation, the National Council on Education, RISD, and Fermilab, the leading particle physics and accelerator laboratory in the United States, where he chaired the board of overseers from 1989 to 1994. As a PhD student at University of Chicago, Glicksman had studied under Enrico Fermi, “the architect of the nuclear age,” for whom Fermilab was named.

“Dr. Glicksman had an infectious smile and a sharpness and intellect that was immediately apparent and dominated a room,” says Anthony Catalano ’72 PhD, who did a post-doc with him. “He is arguably the smartest person I have ever known.” Several colleagues report that he took great interest in others and spoke little about himself, despite his many accomplishments.  “He had a broad interest in… everything, and could talk about it,” Silverman says.  Sammie Giles ’71 remembers Glicksman’s love of learning. “He was different,” Giles says. “He brazenly encouraged engineering students to use their imagination and have fun.” Giles, one of Glicksman’s advisees, also notes that his mentor foresaw the digital revolution. “He strongly advised his students to take digital electronics as an elective, almost five decades ago. I lived to appreciate his arm-twisting advice regarding this particular course.”

Glicksman was forward-thinking in other ways, as well. He was provost while a consent decree from the class-action sex-discrimination lawsuit brought by anthropologist Louise Lamphere was in place. Some felt that the affirmative-action hiring brought by the settlement weakened the Brown faculty but Glicksman believed the old-boy network only reinforced intellectual conformity.  Without a push from the consent decree, he told the BAM in 1992, “you tend to bring in people whom you know, and you don’t get sufficiently diverse views to make progress in scholarship.” Glicksman was also known for being a key part of Brown’s move toward internationalization and interdisciplinary scholarship.

Of course, his many years as an administrator meant that Glicksman wasn’t beloved by everyone. A BAM headline from 1986 suggests one reason for that: “In the Provost’s plan for Brown’s academic future, some departments are strengthened, others are pruned.” According to Silverman, “Maurice would put in the time, read the documents, and make good decisions.” His rigor and decisiveness made him a great administrator, Silverman believes, but decisiveness can come with a cost: “somebody’s going to get offended.” Silverman says he admired and has long tried to emulate Glicksman’s scrupulous morality. He was “the most straight, honest guy,” he says. “He led by example.”

In his 2014 memoir essay, Glicksman expressed happiness that his dreams of being involved in neuroscience did not die, in the end. His daughter Marcie Glicksman ’78 became a neurobiologist. Glicksman’s granddaughter Abigail Kerson ’13 also went to Brown, and then into medicine.

Marcie Glicksman says her father was very proud of the University—and “when he felt strongly about something, he was very committed.”

Reader Responses to Leadership and Humility