Out of the Cellar

Lewis Pollis ’14, a baseball research-and-development analyst for the Philadelphia Phillies, walks softly but carries a big calculator. Though he doesn’t like to talk about his job—sports has as many secrets as espionage—Pollis says the Phillies front office is finally embracing new number-crunching technology. 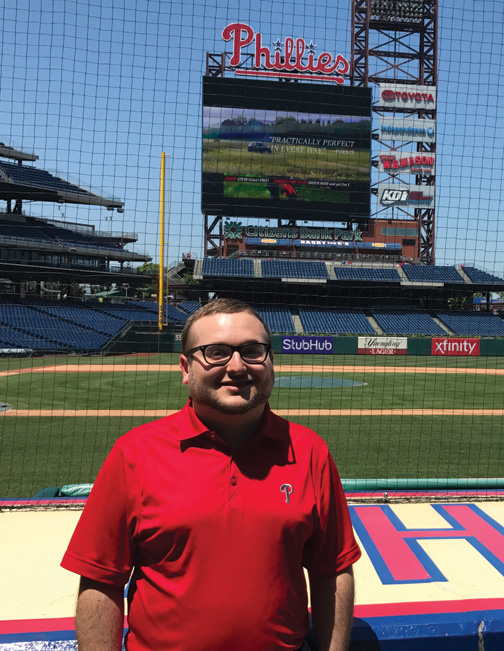 For years, Philadelphia sportswriters have lamented that while other teams were playing “Moneyball” with computers, the Phils seemed to be doing their calculations on an abacus. The results have not been good. In 2015, Philadelphia finished last in its division with a 63–99 record, narrowly avoiding the ignominy of losing 100 games. Realizing things needed to change, next season the new general manager, Matt Klentak, tapped Andy Galdi, a quantitative analyst at Google, to run the revamped baseball research and development department. Galdi hired Pollis, who had been an analytics consultant with the University of Alabama-Birmingham baseball team, as well as an intern with the Cleveland Indians, Cincinnati Reds, and the Phillies. The Phils went 71–91 that season, a modest improvement. Pollis says that one small step is a giant leap for Philly fanatics.

“It’s great to have new people on board and do way more with technology,” Pollis says from his office in Citizens Bank Park. “It’s an exciting time for my department, and our goal is still to put a good team on the field now and in the future.”

Among other things, Pollis collects and analyzes the statistics of professional players team management may want to trade or sign as free agents, as well as of college athletes they might want to draft. But old-time baseball scouts are not likely to lose their jobs anytime soon. While numbers may give an indication of a player’s ability, Pollis says, it doesn’t always translate into performance.

“The challenge is trying to blend quantitative data with the qualitative data in the scouting reports,” he says. Talking to a player’s coaches gives scouts an idea of a player’s work ethic and if he’s willing to work hard to improve—that elusive “coachability.” Yet you can’t predict everything, Pollis adds. “Even if you have the perfect projection model or scouting report, players are still human.”

Pollis grew up in Cleveland, Ohio, the grandson of a local radio talk show host and son of Andres Pollis ’86. As a boy, Lewis had binders and boxes filled with baseball cards; his favorite player was Indians shortstop Omar Vizquel.

“I spent hours poring over box scores,” he remembers. “I liked that aspect of the game, that everything could be measured and quantified.”

At Brown, Pollis concentrated in economics and political science, played saxophone, and captained the Brown Band’s intramural softball team. He wrote for the Political Review and the Brown Daily Herald, where he covered baseball and wrote about sabermetrics, the fancy word for the statistical analysis of baseball records. His mentors were Assistant Professor of Political Science Michael Tesler (who is now an assistant professor at UC Irvine) and Professor of Economics Kenneth Chay. His honors thesis was titled “If You Build It: Rethinking the Market for Major League Baseball Personnel.”

“I don’t know how many schools would let a student write his thesis on baseball,” Pollis says. “Dr. Tesler encouraged me to pursue my passion, and I left his office feeling excited about what I was going to do. And I felt I didn’t have to explain myself to my thesis adviser, Dr. Chay. He understood and supported me.”

Pollis says that statistical analysis has done nothing to detract from his passion as a fan. “I still enjoy going down into the seats and watching the game without a calculator,” he says, “watching players doing things numbers can’t always predict.”

Reader Responses to Out of the Cellar