In announcing this year’s recipients for the coveted fellowships known informally as genius grants, the MacArthur Foundation described Greg Asbed ’85 as a human rights strategist who developed a big-picture approach to improving the conditions of farm workers, particularly in the United States. Yet Asbed’s ground-breaking work is rooted in the experiences of workers with whom he’s partnered for more than two decades, and in the small town of Immokalee, the inland Florida community set amid the state’s prolific tomato fields. 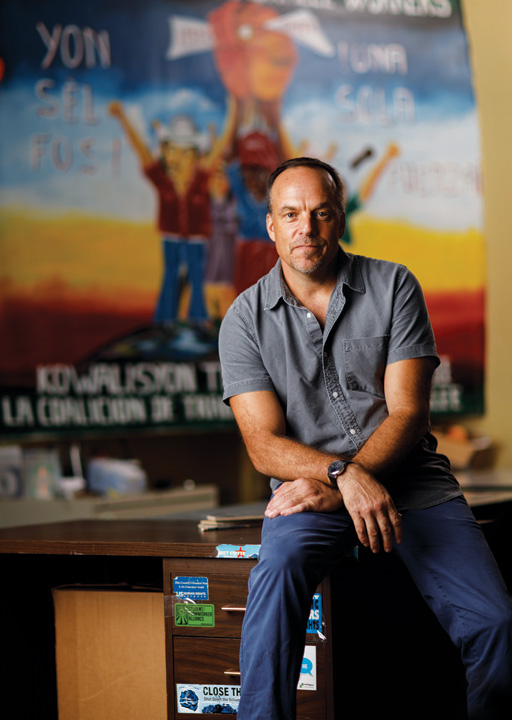 Courtesy John D. & Catherine T. MacArthur Foundation
Pictures of Asbed are scarce in most articles about the coalition he cofounded. He likes to keep the focus on the farm workers.

The area, once known as ground zero for human slavery in the United States, was an obvious target for reform. In 1993 Asbed, his wife, Laura Germino ’84, and Immokalee farm laborers founded the Coalition of Immokalee Workers (CIW), which despite early intimidation from farm bosses, has been successfully tackling such issues as human trafficking, sexual abuse, wage theft, and unsafe and unsanitary working conditions for the past 24 years. They have succeeded where other groups have failed by working with the nation’s biggest food sellers.

Despite their increasing fame, Asbed, Germino, and other CIW staffers still work in a modest one-story building that doubles as a community center, radio station, and rudimentary community store. The windows overlook the parking lot where workers load onto buses each morning. And they politely resist efforts by journalists to focus on them rather than their coworkers, even as they recognize that their backgrounds give them a better chance of being heard in the corridors of power. In 2015, while he was Secretary of State, John Kerry gave the group the Presidential Award for Extraordinary Efforts to Combat Trafficking in Persons, noting that CIW has “pioneered a zero tolerance policy that puts workers and social responsibility at the absolute center.” (See “Justice in the Fields," BAM, January/February 2016.)

The group started out using traditional protest methods, but when that approach didn’t improve overall conditions, Asbed zeroed in on the larger forces at play and realized that for things to change, the key would be to tap into corporations’ sense of responsibility. CIW focused on specific abuses  that its members had experienced, developed a rigorous reporting and enforcement protocol, and enlisted image-conscious brands to promise that, at every link in the supply chain, their products are produced by  workers who’ve been treated decently. Companies that have signed on range from Whole Foods to Walmart to Taco Bell, the target of CIW’s first campaign.

After working for years on behalf of tomato workers in Florida, the group has now expanded its efforts to strawberry and pepper crops in Florida and tomato fields up the east coast to New Jersey. The model has also gained adherents as far north as Vermont, where CIW’s Fair Food Program partnered with dairy workers to negotiate an agreement with Ben & Jerry’s, evidence, Asbed says, that the approach is replicable.

The MacArthur grant isn’t the group’s first big honor. It’s also been recognized by the Clinton Global Initiative, the State Department and the United Nations. Recently CIW’s replica of the Statue of Liberty holding a tomato instead of a torch, which workers once carried on a 235-mile march, was put on permanent display at the Smithsonian in an exhibit on American protest art.

The MacArthur recognition ups the ante, not just in prestige but in the bottom line. Recipients get $625,000 with no strings attached, and while Asbed joked that he could sure use the money, his plan is to plow it back into CIW’s operations to help it expand its reach. One major initiative is the Worker-Driven Social Responsibility Network, a coalition of human rights organizations that’s targeting other crops, areas, and even industries.

“Literally tens of thousands of people have contributed to the achievements that are being recognized,” Asbed says. “So the money will go to honoring their contributions by helping to spread the protections of the Fair Food Program to more and more workers across the country.”

Reader Responses to Asbed Gets a MacArthur