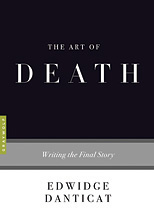 The Art of Death: Writing the Final Story by Edwidge Danticat ’93 MFA (Graywolf)
In this, the 14th book in Graywolf’s “The Art of” series, in which writers wrestle with issues of craft, Danticat lightly and fluidly slips between a narrative of her mother’s fatal cancer diagnosis and an illuminating discussion of the various ways that both she and other writers have dealt with death in their work. Divided into nine slim chapters, such as “Living Dyingly” and “Close Calls,” Danticat draws on an expansive roster of authors, from Toni Morrison to Christopher Hitchens to Audre Lorde. A brief but engrossing read.

The Memory Trees by Kali Wallace ’01 (Katherine Tegen Books/Harper Collins)
In her second novel, following the young adult mystery Shallow Graves, Wallace takes us to a small town in Vermont, where Sorrow Lovegood has returned to the family orchard as a teenager after the death of her older sister Patience and their mother’s breakdown. There is much to unravel as Sorrow tries to find out what really happened the night her sister died and confronts her own memories, which the orchard, with its seemingly magical properties, seems to be reviving. The result is a consuming mystical journey.

Democracy’s Schools: The Rise of Public Education in America by Johann N. Neem ’96 (Johns Hopkins)
For a child during the American Revolution who had any education at all, it probably came from either church or family. But by the time of the Civil War most free children attended public, tax-supported elementary schools and some were beginning to go on to high school. Neem, a Western Washington history professor, charts how this transformation came about and points out that public education was established with the idea that it would turn children into better future citizens and not just help them find jobs.

Hexes for the Modern Age: Contemporary Curses for the People Who Irritate You the Most by Val Brains ’07 (Skyhorse)

Coalitions and Compliance: The Political Economy of Pharmaceutical Patents in Latin America by Ken Shadlen ’87 (Oxford)

Immigrants in the Sexual Revolution: Perceptions and Participation in Northwest Europe by Andrew Shield ’07 (Palgrave Macmillan)

The Medal Maker: A Biography of Victor Kovalenko by Roger Vaughan ’59 (Altamira)

Shadow and Substance: Eucharistic Controversy and English Drama across the Reformation Divide by Jason Zysk ’07 AM, ’11 PhD (Univ. of Notre Dame)