White supremacy is not a marginal ideology in the United States, Professor Tricia Rose proclaimed before a crowded room of Brown students and faculty. 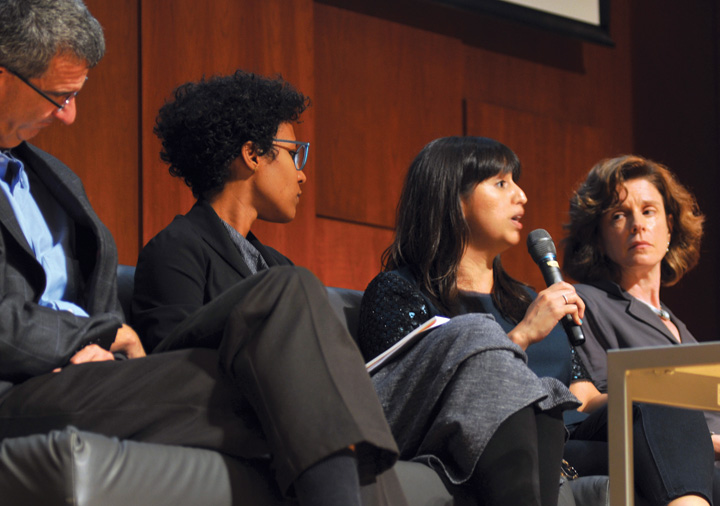 President Christina Paxson organized and moderated the September 6th forum, titled “Charlottesville: Perspectives on the Origins and Implications of White Nationalism in the U.S.”

“It is absolutely crucial that those of us who believe in racial justice deal with institutional white supremacy and not just extremism,” said Rose, chair of the Africana studies department.

Rose and six fellow professors  discussed and analyzed the roots of the white supremacism that displayed itself in the Charlottesville neo-Nazi rallies right before the start of the fall semester.

“We are living in a time when we can become a nation that enforces brutal policing policies, white supremacy, and xenophobic immigration policies,” said American studies professor Monica Muñoz Martinez. “Or we can create a moment when we correct our course of history and choose a more just path.”

Maud Mandel, professor of history and Judaic studies, drew on her scholarship of anti-Semitism during World War II and urged students to not turn away from injustice.

“We are all implicated in making sure that the society we live in is socially just,” she said.

Bonnie Honig, professor of modern culture and media, referring to the prevalence of Confederate flags in the South, asked students to question “why certain images get preserved” and “whose history gets to be commemorated in public space.” But instead of considering what public monuments ought to be taken down, suggested professor John Tomasi of the political science department, we should  think about what political monuments we want to put up as a “public statement of community.”

“What events from our past should be commemorated in our future?” he asked. Tomasi suggested that Brown consider erecting a statue for Ruth J. Simmons, not only, he explained, because she was the first black president of Brown but because of her work as a champion of free speech and learning.

Associate professor of history Michael Vorenberg pointed out that what most people think of as the Confederate flag was never the official flag of the Confederacy. It was actually Robert E. Lee’s battle flag, and it became the banner of white supremacy 100 years later.

He questioned, as well, the victorious North’s claim to “moral perfection” following the conclusion of the Civil War, reminding the audience that Brown had been intimately connected with the slave trade.

Emily Owens, also of the history department, explained that white nationalist groups participating in the Charlottesville rallies were motivated by a nostalgic illusion.

“There were multiple layers of memory operating at Charlottesville, all leading back to slavery,” Owens said. “But the memory at its root is actually a fantasy.”

The antebellum South was not as pleasant a place for white slave owners as today’s white nationalists might imagine, she continued. Slaveholders were terrified, and with good reason. Enslaved people knew they weren’t property; there were always acts of revolt and expressions that affirmed the human dignity of those enslaved.

“The eruption of violence is not a sign of white supremacist strength but of its panic,” Owens concluded.

Yet we must avoid constraining what constitutes “racism” to the events of the Charlottesville rally, explained Tricia Rose. It’s easy to think that “the rest of us are therefore not racist and our world is not producing racist outcomes—if only we could get rid of the fringe groups.”

Rose observed that in the face of white nationalism it can seem as if the only way to win is to be more hateful than those who support it.