When our son, J., now 17, was eighteen months old, he developed serious and puzzling health issues. A few years earlier, my husband, Karl Jacoby ’87, and I had moved back to Providence to teach—what a dream!—at Brown. In the pediatric intensive care unit, doctors tried to find out why J. was rapidly losing his ability to walk. It turned out he had a huge intraspinal tumor, and it was unclear if it was cancerous or not. The doctor at Mass General wanted to use radiation; the Providence doctor wanted to hold off. 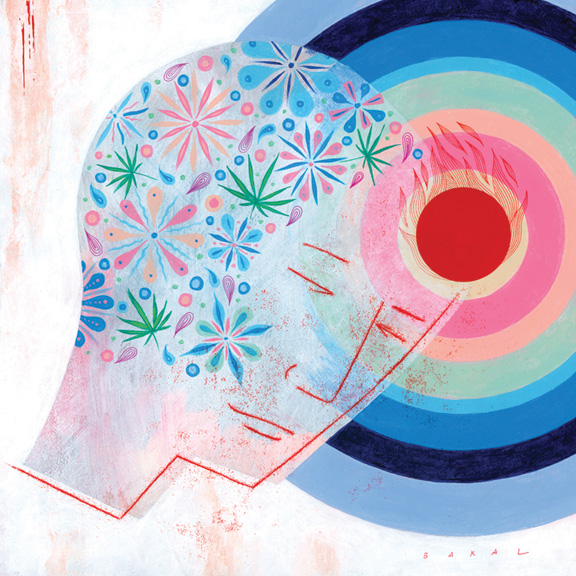 J. survived the tumor but was diagnosed with autism when he was three. When he started banging his head against our cast-iron tub, the local autism experts recommended antipsychotics. As a mom I sensed he was in a lot of pain, even though he was unable to communicate it. Indeed, J. was diagnosed with inflammatory bowel disease, and prescription drugs eased most of his pain. Then, at nine, he became resistant to these anti-inflammatories. The pain and headbanging returned. He started eating his shirts, slapping his own face, and hitting teachers. Antipsychotics—and institutionalization—were discussed. At meal times he began throwing plates of food across the room. I didn’t feel right giving him up to the “experts,” who called these “autistic behaviors.” I believed it was his way of letting us know he was in intractable pain.

I’m a doctor’s child, brought up to respect and never question. But what about when doctors disagree? I did what my Brown education had taught me to do: question. I researched the antipsychotic that maybe half the kids in his special-needs class were on and was shocked to learn it had dangerous side effects—tics, breast development in boys, diabetes, even death—but no statistically significant efficacy. And the “behaviors” returned once the drug was stopped. Did I want to place my son on a dangerous drug that he’d have to take all his life?

Searching for alternatives, I eventually found cannabis, which has been used successfully to treat inflammatory gut disease and anxiety, another of J.’s challenges. I learned that cannabis’s toxicology profile makes it less lethal than caffeine. Back in 2009, however, the idea of using “pot” on a child was scandalous. Rhode Island had recently created a medical cannabis  program, but cannabis was still illegal under federal law. What would happen if the authorities found out I was giving J. cannabis?

Sometimes, one just needs a little shove from the universe. When J. returned from school after consuming an entire shirt, the school pressured us to get him on antipsychotics immediately. Walking home from teaching, I saw a notice that the Rhode Island Patient Advocacy Coalition (RIPAC), the local medical cannabis patients’ group, was meeting later in the week, right on campus in Petteruti Lounge.

I went to that meeting. I talked to patients. I met one of RIPAC’s founders, Jesse Stout ’06, who listened intently. After we discussed my situation and the research I’d done, he agreed to help. And so, at age nine, J. became the youngest person in Rhode Island, and possibly the nation, to receive a medical cannabis license.

Our son still faces challenges, but shortly after he began his cannabis trials, his tantrums decreased, his shirt eating stopped entirely, and best of all he learned how to ride a two-wheeled bike, something all the autism experts had told us he’d never do. Today, we live in New York City, and every time he rides his bike, a smile of pride on his face, I secretly thank my Brown education (and cannabis). I really do.

Marie Myung-Ok Lee is a novelist, an essayist, and a Brown visiting lecturer in American studies.