A workout. A dance party. A therapy session. An escape. For Soulcycle CEO Melanie Whelan ’99, the company’s indoor cycling classes can represent any of these things. 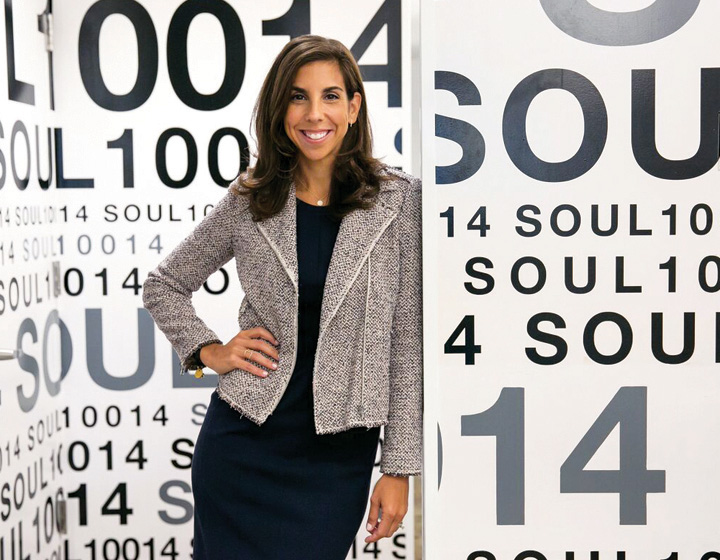 “I’ve been riding for seven years now, maybe more,” Whelan says. “I’ve found lots of different stuff in that room. I’ve found relief after having my second baby. I’ve found joy in accomplishing more physically than I knew was possible. So I really hope our riders find what they’re looking for.” It looks as if they do. Every morning, thousands of spandex-clad customers flock to SoulCycle classes around the country, where they hop on a stationary bike and pedal to high-energy music before starting their day.

SoulCycle was founded in 2006 behind a laundry room in Tribeca, and a lot has changed since then. The company has now expanded to 74 locations nationwide and attracted an almost cult-like following. Devoted fans wear T-shirts emblazoned with the slogan “Find your soul,” and such celebrities as Nicole Kidman and Tom Cruise swear by the classes as a fun way to stay in shape.

Whelan started to “find her soul” when she lost interest in her engineering concentration at Brown. The turning point came at the end of her junior year, when she was assigned an engineering project that involved building a wind turbine from scratch. “I had this epiphany moment while sitting on the floor of my dorm room that I didn’t want to be an engineer, and I didn’t want to study engineering anymore,” Whelan recalls.

Luckily, it wasn’t too late for Whelan to add a second concentration in economics, which helped her secure a job at Starwood Hotels after graduation, and later at Equinox Fitness. When Equinox acquired a majority interest in SoulCycle in 2011, Whelan was in the perfect position to switch brands. She joined SoulCycle’s business development team the following year.

These days, Whelan travels frequently to meet with trainers and scope out new studio locations. But when she’s home in Manhattan, she makes it a priority to spend time with her husband, David; her son, Lachlan, 7; and her daughter, Charlotte, 5.

One recent evening, Whelan came home from the theater and asked her babysitter how the night had gone. “Apparently Lachlan sat up in bed and said, ‘We have a little more wiggles left in our body. We have to hold one more SoulCycle class before we go to sleep,’” Whelan says with a laugh.

Whelan never loses sight of how far the company has come. “There were originally 25 of us sitting behind that laundry room in Tribeca. We thought there could be maybe 20 or 25 locations,” Whelan says. “Today we’re sitting with 74 locations and 15 markets with a really long and wide growth runway in front of us. It’s just been an amazing ride.”