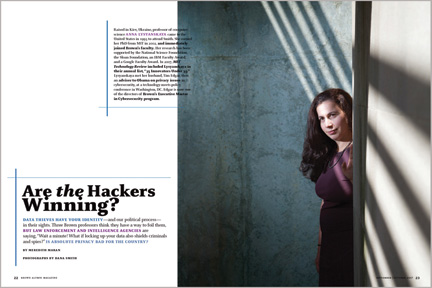 When I entered Brown in the fall of 1994, mathematics professor Jill Pipher was my Curricular Advising Program (CAP) adviser and my professor in Math 35 (“Are the Hackers Winning?” September/October). Two years later, Jeff Hoffstein was the faculty adviser for me and a group of friends when we did a GISP on cryptography. I remember sitting in the auditorium of Kassar House when Professors Pipher, Hoffstein and Joseph Silverman presented the NTRU cryptosystem for encrypting data. I recall hearing the (apocryphal?) story that NTRU stood for Number Theoreticians R Us.

I have spent most of my career working in the cybersecurity industry, spurred by my experiences at Brown. Today, I am the director of security technologies at Entrust Datacard, and one of the questions that my team grapples with is how to prepare for the “post quantum” era, when quantum computers start to make today’s RSA cryptosystem obsolete. The question is complicated by uncertain timelines and long transition periods (replacing cryptographic algorithms across software and systems can take years), but lattice-based cryptosystems like NTRU are likely to be part of the solution. I look forward to seeing Brown researchers continue to innovate in cybersecurity.

A highlighted comment by Brown cybersecurity expert Anna Lysyanskaya in your cover story reveals a stunning lack of awareness of the importance of federal law enforcement work in the cyberworld to disrupt and deter criminals that include hackers, terrorists, and child pornography traffickers. While encryption may be a “fun math challenge” in the Ivory Tower, it can severely cripple law enforcement’s efforts to trace, disrupt, and prosecute criminal enterprises. What is needed is a sincere effort among cybersecurity experts to assist in crime prevention, not name-calling and dismissal of the FBI’s and other agencies’ views as “deeply misguided.”

I was struck by the callous and dismissive letter from Ted Klein ’69, a graduate of an institution he so glibly calls “a national laughingstock” (“Embarrassed,What You Thought, September/October). Although I also share practical concerns regarding the pronoun issue, the people in our society who face almost incomprehensible challenges in resolving fundamental crises with their gender identity are poorly served when supposedly well-educated persons who ought to know better decide that slapping the p.c. label on the topic is tantamount to putting the issues to bed.

As the parent of a child whose own decisions and actions in this area have been charged with fear and emotion through a painful period of discovery and growth, I’m saddened that someone would tarnish the pages of the BAM with such ill-disguised vitriol. I applaud the legitimate efforts of caring members of the Brown community such as Vice President for Campus Life & Student Services Eric Estes to help forge admittedly new paths to help achieve greater social acceptance for students facing challenges similar to those of my child, and I hope that Klein can perhaps exercise more discretion before next opining on matters clearly beyond the range of a rather narrow worldview.

The thoughtful and touching tribute to art professor Walter Feldman by Collette Crutcher ’78 brought back some memories of “his characteristic sweetness and grit” (“He Gave the Best to His Students,” Obituaries, September/October). I was fortunate enough to be in Professor Feldman’s introductory drawing class in the fall of 1985, which was when my parents called me out of the blue to tell me that they were separating. In a fog and falling behind on my coursework, I felt I should tell my teachers what was happening. After class Professor Feldman listened to my explanation for my inattention as he arranged students’ drawings, and he waved off my concerns about missed deadlines. Then he turned and looked me in the eye and said sharply, “It’s not your fault, you know.” I burst into tears. I did know, after that.

I was sorry to read of religious studies professor Wendell S. Dietrich’s passing in the September/October Obituaries section. He was a wonderful teacher who was committed to his students. I remember his comment to me, which stung at the time: “You should be doing better.” He was right.

Wendell Dietrich was perhaps the ideal example of a Brown professor. His knowledge of his field was both broad and deep, and he was fully committed to the education of his students. The characteristic that I recall most vividly was his kindness. If a student developed an enthusiasm for a topic or thinker, Professor Dietrich would not simply encourage that enthusiasm, he would share in it. If a student’s interpretation was mistaken or wrongheaded, Professor Dietrich would correct that error in a gentle, yet persuasive, way. He let you know that he respected your idea and your effort in developing it, and he helped you find alternative ways of considering it that allowed you to think in a more well-informed and sophisticated manner. He did not simply “instruct;”he teamed with you in a way that would enhance your own thinking and understanding. I have striven to emulate his pedagogical techniques in my own teaching career. To the extent that I have succeeded, it is in large part due to Professor Dietrich’s example.

I was a religion and philosophy major when I was at Brown from 1962 to 1966. Professor Dietrich was my honors thesis adviser, and I took many classes he offered in Christian religious thought. He was an intensely serious scholar and teacher, and very conscientious and helpful as an adviser. The work he required stretched my abilities as a researcher and thinker. He also advised me regarding graduate study in religion. That was not easy at the time, because most PhD programs required a Bachelor of Divinity degree as a prerequisite. As a woman, I was going to find it difficult to enter this field of study.

In the end, with Prof. Dietrich’s encouragement, I was able to begin at Harvard Divinity School and earn a PhD from the University of Chicago Divinity School. I have continued at Temple University in Philadelphia as a professor of religion and plan to retire in 2019. Looking back on my education at Brown, I have really great memories of what I learned, and of the mentoring I received from Prof. Dietrich. May he rest in peace.

As always, I enjoyed Norman Boucher’s insights in the September/October issue (“Soundtracks,” Here & Now). I’ve often thought about the soundtrack of my life. My friends and classmates enjoyed great music, that goes without saying, but we also shared it together at the same time. It blared from car radios, transistor radios on the Green, and nearly everywhere else. We listened to it simultaneously. I wonder what is lost from that common experience now that everyone hears his or her own music alone, through earbuds. That’s not even considering the fact that today’s music sucks. (I know, I know: “Get off my lawn.”) I can’t imagine what the class of 2018 will be listening to, or how they’ll dance, at their 50th reunion.

Just to let the editors know that, from one alumnus anyway, the September/October BAM was what an alumni magazine should do. Combining articles about Syria, cybersecurity, and Abbey Road made it the best issue by far that I have ever read. Do it again! And again!

I always read the BAM cover-to-cover, and in the latest issue I tore out five different articles to pass along to friends and to my teaching colleagues so they could share them with students for inspiration. Thank you so much.

Your photographer Dana Smith is one good photographer (“Are The Hackers Winning?” September/October). I’ve been a professional photographer all my adult life, and I know a good eye when I see one. Dana Smith has a great one.

The September/October obituary for Christopher B.R. Brown ’75 neglected to list as survivors his two daughters.