In one corner of Brooklyn last August, you’d swear it was Christmas, right down to Macy’s Christmas windows. 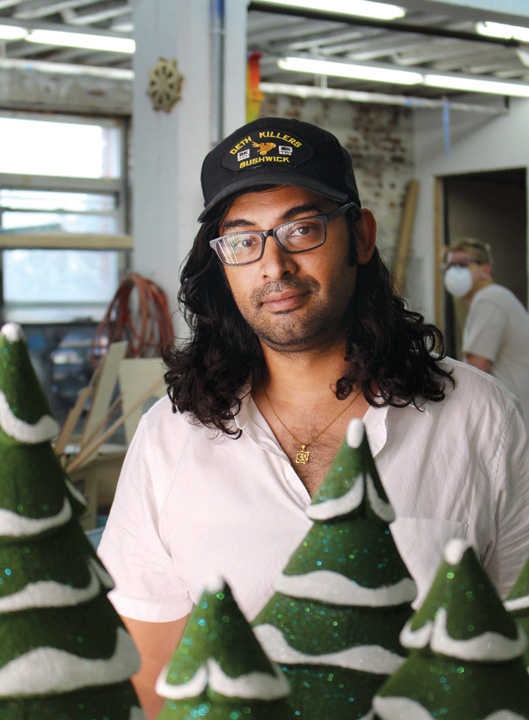 Manu Sawkar ’04 designs and oversees construction of the storied holiday windows in a sprawling warehouse in Red Hook. It’s Santa’s workshop for New York, and he’s the chief elf.

For five years now, Sawkar has married his background in computing with his experience in film production to bring six windows at Macy’s Herald Square to life. During peak hours, as many as 10,000 people view his work.

Each February, Sawkar and Macy’s window director team up to develop ideas for interactive displays around a theme that changes each year. In May, Sawkar and a crew of about 30 artisans, including designers, mold makers, sculptors, painters, carpenters, mechanical engineers, and metal workers, begin turning the designs into reality. By late summer, their Red Hook workshop looks like a scene from the North Pole.

“Definitely at that point it does turn into Santa’s workshop, and it’s just a bunch of elves making holiday stuff. It is a little strange seeing Santa Claus in August,” Sawkar admits.

Past years’ displays have included a giant pinball machine with buttons that could be pushed from the window’s exterior, and a Peanuts-themed scene with an acrylic keyboard connected to a playable iPad-like device outside the glass.

The content of this year’s windows will remain a secret until they are unveiled before Thanksgiving.

Sawkar double concentrated at Brown in modern culture and media and computer science. He says his company, A Standard Transmission, grew out of a way of thinking that started at the University. “I’ve always been interested in the intersection of things. I was really interested in media production and technology, and that has guided me to where I am now,” he says.

After graduation, Sawkar, an Ohio native, moved to New York to work in film production. But he arrived during a writers’ strike, and jobs were hard to find. Stints as a cinematographer and a post-production supervisor for reality television shows kept him afloat financially, but he felt stifled. “I wasn’t super excited about my trajectory,” Sawkar says. “There were no Netflix shows at the time, and I was shooting reality TV, which didn’t interest me that much.”

Sawkar was introduced to Macy’s through a set designer friend who hired him to build synchronized screens for the store’s annual Flower Show sets. “They needed to sync content, and no one in his shop knew how to do that,” Sawkar says. “That was my foray in.” From there his relationship with Macy’s expanded. “They always hired me to do the tech portions of projects where traditional fabricators had no idea how to do that stuff,” he says.

Over the years, as technology has become more central to Macy’s displays, Sawkar has played a more integral role in their production. His unique technology-first approach to building the windows is ultimately what helped him land the coveted job. “I come at it from a different perspective from most,” he said.

Sawkar isn’t concerned about Macy’s plans to shut 100 stores over the next couple of years as the brick and mortar retail business falters. He believes his company produces the kind of work that draws people out of their homes—and their online buying habits—and into stores. “We are trying to have a world where there are still physical attractions and reasons to leave your house and meet people,” Sawkar said. “And I think that’s not going to go away, and I feel excited to be a part of that.”