If you thought the sports highlight at Fenway Park in 2017 was the Red Sox playoff game, think again. On an unusually frigid November 10 night, the Bears kicked off the two-week Fenway Gridiron Series by taking on Dartmouth at the old ballpark for the first time since 1923. Despite the weather, linebacker Adrian Caesar ’18 (69), alongside offensive linemen Zachary Marti ’18 (71) and Jack Neary ’19 (75), led the charge onto the historic field. Fans had little to cheer about until late in the game, when the Bears, whose rushing game never really got into gear, finally scored. Dartmouth, which ended the season tied with Columbia for second place in the Ivy League, defeated the Bears, 33–10. After winning two of its first three games, Brown lost seven games in a row, finishing the season 2–8 overall, and a shocking 0–7 against the Ivies, a rare dip for head coach Phil Estes, whose teams have finished in the top half of the Ivy standings for 16 of his 20 years at the helm. One standout player during his four years at Brown has been Richard Jarvis ’17, whose 17.5 sacks is the second highest number in team history. 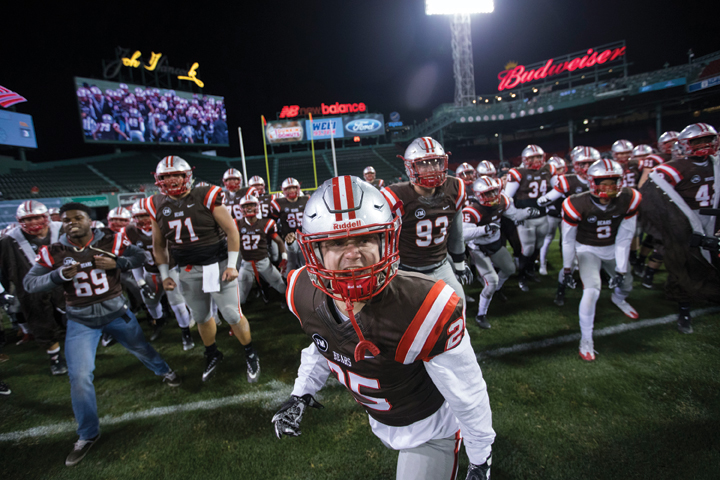 Nick Dentamaro
What do you think?
See what other readers are saying about this article and add your voice.

Reader Responses to Brown at Fenway