Finding Water in Space
Water in outer space—on the moon, on Mars, and on Mercury—gives us hints about planetary history, including Earth's. And it may quench our thirst and provide rocket fuel for the future.

Everyone, before 2008: “Obviously, the moon is dry.” Brown professor Carle Pieters: “I agree! Wait, no.” 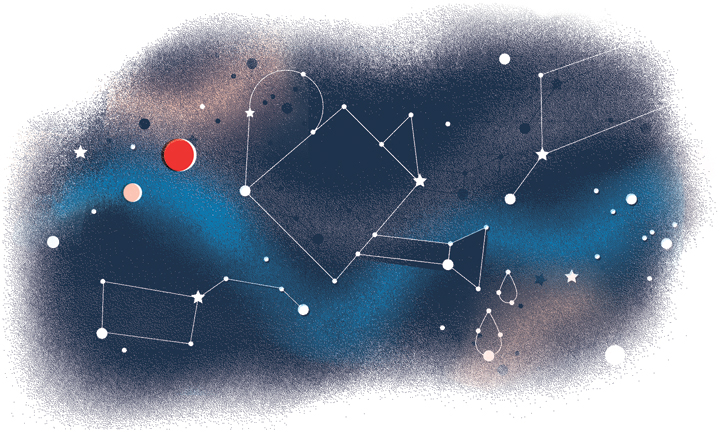 When Carle Pieters’s Moon Mineralogy Mapper reached lunar orbit in 2008 on board the Indian spacecraft Chandrayaan-1, she was more than a little surprised to see signs of water. “Obviously, the moon is dry,” she—and everyone—had thought. Indeed, when Apollo samples showed trace amounts of water decades ago, scientists assumed an error. Pieters almost made the same mistake. “It was so unexpected we immediately thought it was wrong,” she says. So the professor of earth, environmental, and planetary sciences (EEPS) asked for sensors from two passing spacecraft to check her readings. They saw the same thing. “We couldn’t get rid of it no matter what we did.” Water, on the moon.

Here’s how it happens: The moon is covered with rocks containing silica and oxygen. The sun constantly pushes out a solar wind containing protons and electrons. A proton is essentially a hydrogen atom with no electron, so when this solar hydrogen hits the rocks’ oxygen, OH or hydroxyl forms—a short reaction away from H2O.

If water forms quickly enough, colonization could be feasible, says Pieters: “If we can produce water on the moon, that saves us a lot in terms of basic logistics of establishing a human base.”

Also in 2008 Alberto Saal, another professor of EEPS, detected minute traces of water in volcanic samples from later Apollo missions, comparable to the amount in volcanic rocks on Earth. Then last September, Ralph Milliken, associate professor of EEPS, and his student Shuai Li ’14 ScM, ’17 PhD created the first-ever map of water on the moon, using Pieters’s data and lab studies of existing rock samples. They determined that rock in almost all the volcanic regions had entrapped water. Previously, scientists thought it was limited to the poles. “The signature of water is present nearly everywhere on the lunar surface,” Li says.

Geyser! Slamming stuff into the moon to see if water comes out

Landing people on the moon is costly. Smashing it with a rocket is cheaper. Thus the LCROSS mission in late 2009: slam the upper stage of a Centaur rocket into the South Pole crater Cabeusa. “We were trying to understand if there was ice or volatiles buried in the shadows,” says Peter Schultz, professor of EEPS, explaining that previous mineralogy data was obtained by analyzing the reflection of light off the moon’s surface. But what was lurking in the dark?

Chasing the rocket were spectrometers designed to capture a chemical view of everything that flew up into the sunlight, three quarters of a mile above. Schulz, Brendan Hermalyn ’11 PhD, and the Brown student team found evidence of layered deposits—old ice, new ice, and things they didn’t expect, like silver. That means that the craters might contain a deep record of comet and asteroid impacts to the moon—which may shed light on the origin of earth’s water and mineral deposits.

Mercury is perhaps the last place you’d expect water. Closest to the sun, and with no atmosphere to trap gases, Mercury’s equator soars to 800 degrees Fahrenheit. But the smallest planet barely tilts on its axis, leaving parts of its poles in permanent shade—and radar telescopes on Earth detected something reflective. The Messenger probe launched in 2004 orbited Mercury from 2011 to 2015, streaming data.

Most intriguing, the water seems new, possibly arriving in the last 10 million years via comet or asteroid. Age estimates are made by measuring overturn in the regolith, a jumble of loose mixed dust, soil, and broken rock covering a solid surface. “The deposits look fresh, geologically speaking,” says Deutsch. “They aren’t dirty around the sides. They don’t look eroded. If they had been there for a really long period you might expect things to have covered them up.”

Will Man Get to Mars?

Mars has plenty of sun (for power) and water (for drinking and fuel). But does it have both in the same place?

Sending humans to Mars is still a hypothetical mission. Just don’t remind geological sciences professor Jim Head. “What are we waiting for?” he asks.

One main answer is: water. Ballpark estimates suggest that a modest first mission might require a cubic meter of water a day. “Over several years that’s a lot of water,” says colleague John Mustard, professor of earth, environmental, and planetary sciences.

In 2015 Head addressed a NASA workshop on Mars exploration, arguing that  Deuteronilus Mensae (DM), a geographically diverse region on Mars, would be a good landing site for humans. He and a team of Brown colleagues had researched and identified the site. Head stressed that there was water for both easy, immediate use and efficient long-term extraction. The DM landscape shows considerable history of glaciation, and radar has confirmed deep sheets of ice. “This is an incredible site for very long-term exploration,” he argued. “There are essentially inexhaustible supplies of water ice.”

Clues to Extraterrestrial Life (Yep, it starts with water)

When Mariner 9 began returning images in 1971, we learned that there was once lots of water on Mars. But was it wet enough long enough for life to take hold? Brown undergrad and grad students, advised by Jim Head and John Mustard,  have helped profile possible mission landing sites, using geological signatures of water. Two of the sites have made NASA’s final cut for mission consideration.

Jezero, a crater once thought to have been flooded, contains what looks like a classic river delta. If early microbial life emerged, traces may well be preserved in clay deposits. Another site promises geologic diversity and a history of water. “And possibly even life underground,” hints Mustard.

It’s not outrageous—most of life’s diversity on Earth is actually underground. But, as on Mercury and the Moon, water on Mars gravitates to the poles.

That’s a problem. Human settlements probably need to be no more than 30 degrees from the equator to meet solar energy needs.