The spring of senior year was particularly busy for Solomon Goldstein-Rose ’16. He finished up his classes, directed a Shakespeare play, and launched a campaign for the Massachusetts state legislature. That September he won the Democratic primary over five other challengers. Without a Republican opponent—it’s Massachusetts, after all—he became the youngest legislator on Beacon Hill. 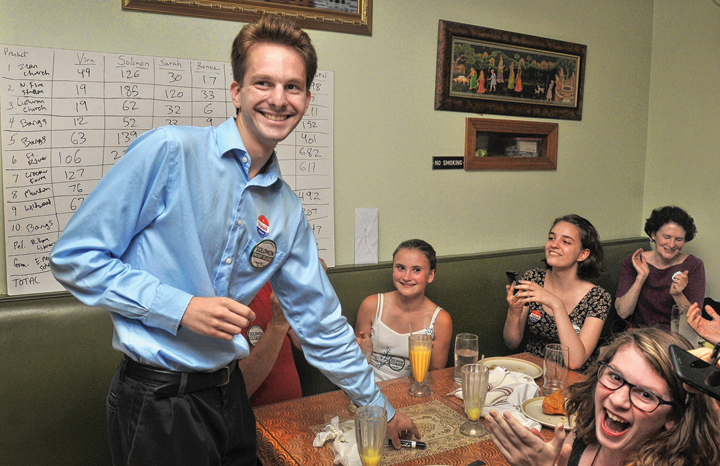 “Solomon has an amazing ability to juggle many projects at once and do them all really well,” says environmental science professor Timmons Roberts, who worked with Goldstein-Rose on several projects at Brown.

Goldstein-Rose initially focused his academic career on climate change, aiming for a career researching and developing clean energy technologies. “Climate change is the most urgent issue of our time—the most serious economic and public health threat in the next few decades,” he says. An internship at the White House Council on Environmental Quality pointed him in a more political direction.

The depth of Goldstein-Rose’s burgeoning political talents became evident in 2013, after the Brown Corporation declined to divest Brown’s endowment from coal interests, despite student demands. President Christina Paxson explained at the time that the University remained committed to sustainability and reducing carbon emissions in other, more significant ways.

While some students pushed back against the Corporation’s decision, Goldstein-Rose saw an opportunity. He met with Paxson and asked about alternative actions the University could take to help fight climate change.  “He just thinks differently,” Roberts says.

After Goldstein-Rose reached out to Roberts and other student activists, the University provided funding for two statewide coalitions to help reduce carbon emissions. Goldstein-Rose says his experience founding and directing Energize Rhode Island was instrumental in developing his political career.

As the state representative from the 3rd Hampshire District, which includes the city of Amherst, Goldstein-Rose is developing an energy jobs bill that includes carbon pricing as part of a broader strategy to stimulate clean energy technologies and to “make Massachusetts the Silicon Valley of the energy economy.”

In addition, Goldstein-Rose has every intent of inspiring young people in politics. “It would be an ideal outcome if this BAM article leads even one young Brown graduate to engage politically,” he says.