More than 64,000 Americans died from an opioid overdose in 2016. That’s seven deaths per hour, more than during the peak of the AIDS crisis in 1995. With the White House declaring opioid abuse a national public health emergency, Brown researchers and alumni are on the epidemic’s front lines, tackling the crisis from multiple angles. 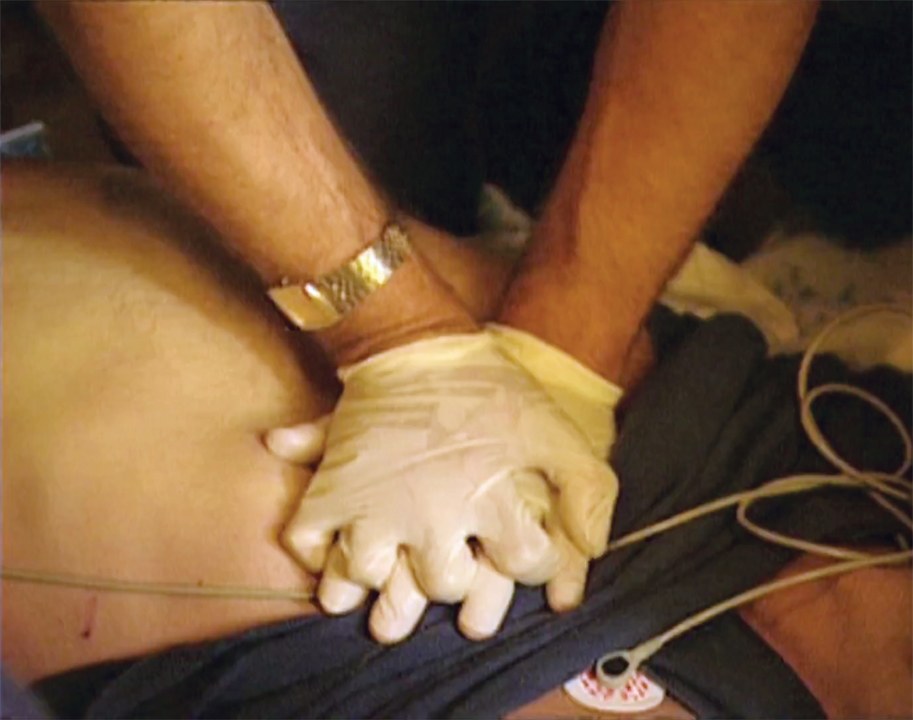 Courtesy HBO
An overdose scene from HBO's Warning: This Drug May Kill You.

One out of 12 U.S. physicians accepted gifts from opioid manufacturers between mid-2013 and the end of 2015, reports Brandon Marshall, an associate professor of epidemiology at Brown’s School of Public Health. The total take: $48 million. Marshall recently published those figures in the American Journal of Public Health after he and his colleagues investigated how pharma companies try to influence prescription writing.

“It might be something small, like a $15 meal, or a larger honorarium for a speaking event,” Marshall says. “It surprised us, especially given the current efforts to curb prescriptions.”

Marshall is also an expert adviser to Rhode Island Governor Gina Raimondo’s Overdose Prevention and Intervention Task Force and has spearheaded the development of PreventOverdoseRI.org, a public data “dashboard” that continuously updates the state’s progress in reducing and preventing overdose deaths and improving access to treatment and recovery.

“This site allows visitors to monitor how many overdoses are occurring and how many Rhode Islanders are entering treatment,” Marshall explains. “People can see where we’re doing well, and where we need more improvement. It holds us all accountable.”

Warning: This Drug May Kill You takes an unflinching look at the devastating effects of addiction. By combining startling data with humanizing home movies and photos, this HBO documentary by Perri Peltz ’82 is an eye-opening dive into this terrifying and widespread epidemic.

“We felt the current narrative was, ‘These are bad kids abusing drugs; they’re junkies, and this is what they deserve,’” says Peltz. “That’s not it. It’s a brain disease, not a moral failing. The vast majority of people addicted to opioids or heroin started with a prescription opioid.”

Peltz, who has a master’s in public health, says she was particularly touched by a Chicago woman who was  prescribed OxyContin for kidney stones at age 16 and became addicted to it. Now in her late 20s, she lost her sister to a fatal overdose and, six weeks after filming, relapsed herself. “We don’t want to just dismiss these men and women,’” Peltz says. “They are our children, our neighbors, our parents. They are us.”

Geoff Capraro, an assistant professor of emergency medicine at the Warren Alpert Medical School, wants to make naloxone, the potent antidote used to stop an opiate overdose, as available in public spaces as defibrillators and fire extinguishers so that bystanders witnessing an overdose can help. Together with NaloxBox cofounder Claudia Rébola, an industrial designer, Capraro is installing nearly 50 NaloxBoxes throughout Providence. Each one houses four doses of naloxone, gloves, a mask for administering rescue breaths, plus information on addiction treatment and how to get naloxone.

“Simply put, we’re trying to keep people alive,” he says.“We believe everyone deserves second chances.” In November 2017, a NaloxBox gave someone just that, with the program’s first save.

Brown professor of medicine and epidemiology Josiah “Jody” Rich has spent time behind bars every week for the last 23 years, striving to improve access to addiction treatment for inmates, with an ultimate goal of reducing opioid overdose deaths after their release. Rich, the director of the Center for Prisoner Health and Human Rights at Miriam Hospital, explains that if you enter jail addicted and aren’t properly treated, you enter withdrawal and “your tolerance lowers, making you more sensitive to opioids.” When released, “these people use the same dose they were using before jail, not realizing their tolerance is reduced, and they overdose.”

Now, under the guidance of Rich and Jennifer Clarke, assistant professor of medicine and the medical program's director for the Rhode Island Department of Corrections, the corrections department is trying a new approach. Over the past two years, it has begun offering opioid addiction treatment drugs to the entire prison population. Instead of tapering off meds prior to their release, individuals can now continue treatment at local centers. Results so far, he says, are promising, suggesting a “dramatic decline in overdose deaths in people coming out of a correctional setting.”

Meanwhile, Rich and Traci Green, of the department of emergency medicine, have launched a  “collaborative practice agreement” program that allows Rhode Island pharmacists to prescribe and dispense naloxone to walk-in customers.

With a specific emphasis on stemming the growth of the opioid epidemic, the federal Substance Abuse and Mental Health Services Administration has renewed the funding of a longstanding center at Brown that provides addiction training for thousands of healthcare professionals across New England. The $3.8 million, five-year renewal for New England Addiction Technology Transfer Center (ATTC) will continue existing programs and fund new initiatives, said ATTC Project Director Sara Becker, a professor at both the School of Public Health and the Center for Alcohol and Addiction Studies. “We train 2,100 providers a year in medication-assisted treatment models, evidence-based behavioral models like Cognitive Behavioral Therapy, motivational incentives, and more,” Becker says, adding that most trainings take just one-half to one full day.

As the first ever Assistant Secretary for Mental Health and Substance Use, Elinore McCance-Katz, a Warren Alpert Medical School professor, oversees the U.S. Department of Health and Human Services’s Substance Abuse and Mental Health Services Administration. McCance-Katz is encouraging the use of the Drug Abuse Treatment Act of 2000 (DATA), which lets doctors use FDA-approved narcotics to treat opioid dependency in their own medical offices instead of at an opioid addiction treatment facility. More than 30 members of the class of 2018 at the Warren Alpert Medical School will receive the training necessary to apply for the DATA waiver post-graduation and to receive their full medical license and Drug Enforcement Administration registration. In future years, the program will extend to the entire medical school class.