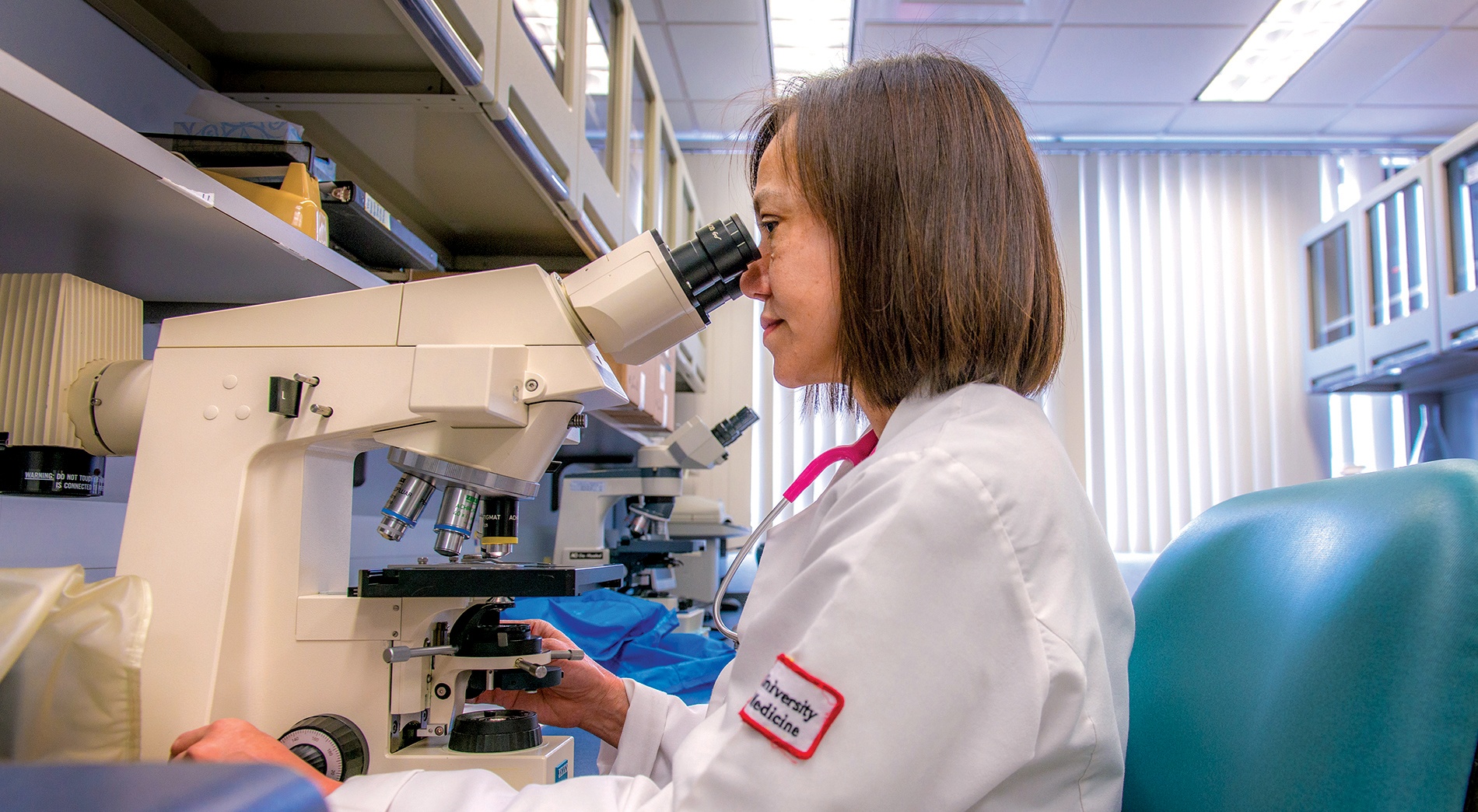 Can We Kill HIV?
Brown researchers are trying to get us there, with tools ranging from microbicides to dating apps.

Let’s talk about reservoirs. No, not the kind that store water supplies. We mean the secret stores of HIV virus in certain compartments, such as the gut, the genital tract, or within the blood-brain barriers, of the bodies of people living with HIV. Even though breakthrough medications the past 20 years have been able to squash HIV that circulates in the blood to the point of it being undetectable on tests—rendering HIV-positive folks healthy and basically unable to transmit the virus—we just can’t get to full-on “cure” until we can find a way to zap those reservoirs.

Enter Dr. Susan Cu-Uvin, longtime director of Brown’s Providence/Boston Center for AIDS Research. She’s one among many docs worldwide studying those reservoirs—in her case, specifically in the female genital tract—to figure out how best to expose them to HIV treatment. Following HIV-positive women over five years, she said, she’s found that 35 percent of them with undetectable virus on lab tests were still “shedding” virus in their genital tract. “Our work is trying to figure out where they’re still infectious,” says Cu-Uvin. (Thus far, at least one very large study suggests that a degree of genital “shedding” does not make someone infectious.) 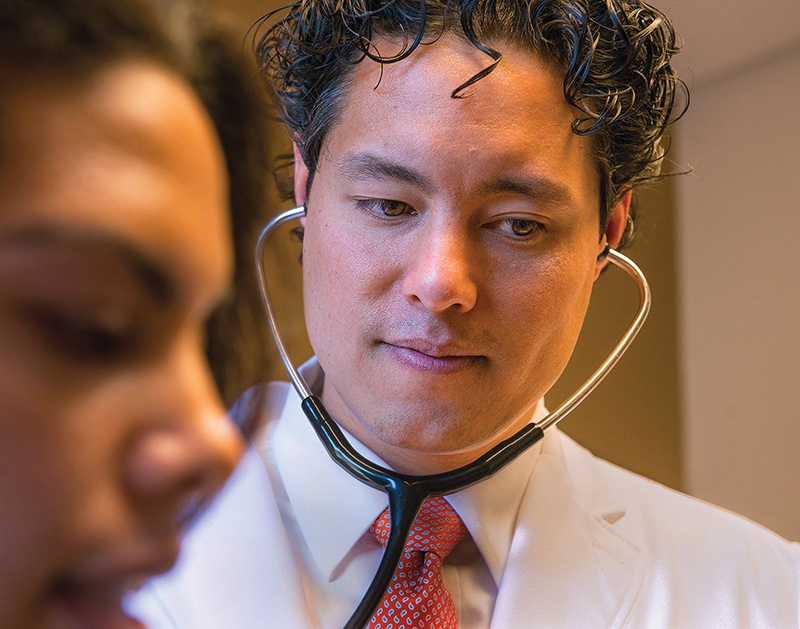 That’s just one of many avenues pursued by Brown’s large HIV research team when it comes to controlling, perhaps even ending, the epidemic. “It’s a very exciting time because patients are living longer,” says Cu-Uvin. “Life expectancy for HIV-positive people on therapy is almost the same now as for uninfected people. That’s very different from what we saw in the 1980s and 1990s, when people were dying in their thirties.” -: CLEANED :-

But “there’s still much more work to be done,” says assistant professor of medicine Philip Chan MD, who is director of HIV/STD Testing and Prevention Services at The Miriam Hospital Immunology Center. “Yes, we have all the tools we need,” he concedes. “We can test and treat people, get them to undetectable with meds, and even prevent people from getting HIV by prescribing them PrEP.” That’s short for pre-exposure prophylaxis, when HIV-negative folks take the HIV med Truvada daily, which cuts the risk of getting the virus by nearly 100 percent—and which, since its 2012 FDA approval, appears to have low to no side effects. “But,” he adds, “sexual health is still not a priority for a lot of people. And there’s still lots of stigma around HIV.”

Close to home
Rhode Island has very low HIV rates by national standards. But Brown docs still want to snuff out the epidemic statewide entirely by focusing on gay and bisexual men, whose infection rates are four times as high as among Rhode Islanders overall. Brown’s team is going digital to do it, teaming up with smartphone hookup apps including Grindr and Scruff, which is how many gay men today connect. They’ll run snazzy ads over the apps announcing that screening for HIV and other STDs—which make people more likely to give or get HIV—are available at Miriam Hospital’s sexual health clinic, run by Chan. Those without insurance will be covered free. “We’ll never fully eradicate HIV unless we get the other STDs under control,” says Chan.

Number of Americans diagnosed with HIV in 2016, according to the CDC.

Women of the world
Globally, huge progress has been made on HIV. According to UNAIDS, more than 20 million people with HIV worldwide are on treatment. But 40 percent of all people with the virus still lack treatment—and in 2016, nearly 2 million new infections occurred.

Clearly, more prevention strategies are still needed—and one of the most promising in development for many years now has been microbicides. They’re antiviral gels that women or men can apply vaginally or rectally, eliminating the need for a partner to wear a condom.

Cu-Uvin has one such microbicide, which also aims to work against herpes, in early safety studies. It’s made from plants, she says, so it would be cheaper to produce. She has 24 women enrolled in a trial. “So far we’ve had no major problems,” she says. In March, she presented early data on the research in Boston at the annual Conference on Retroviruses and Opportunistic Infections (CROI).

Bruce Richman ’91 was so devastated by his 2003 HIV diagnosis that he didn’t start treatment for seven years. “I just didn’t want to face that reality every day,” he says. But in 2012, his doctor told him something that wasn’t well known outside the HIV medical community: The fact that Richman’s treatment made his virus “undetectable” in his blood meant that he was also “untransmittable”—unable to pass the virus to others via sex. “That news changed my life,” he says. “I’d isolated myself but now I had the possibility of sex and love before me again.”

In 2016, Richman started a campaign called “U=U,” short for “Undetectable=Untransmittable,” and spent months convincing the world’s top HIV scientists to sign on. Last September, Dr. Anthony Fauci, longtime head of HIV/AIDS research for the National Institutes of Health, got on board. The Centers for Disease Control  adopted the message, as have more than 550 organizations in more than 70 countries. In the world of HIV treatment and prevention, “U=U” has become a virtual brand, seen on everything from T-shirts to social media.

“This news means that people living with HIV can have sex, intimacy, and even babies without the fear and shame over the chance of giving someone the virus,” says Richman. It’s also fueling a movement to repeal outdated laws, in more than half the states, that criminalize HIV-positive people for having sex without disclosing their HIV status.

Richman says it’s the most rewarding work he’s done since Brown: “It’s rare to get this kind of opportunity to make such a major shift in public health—and in people’s lives.”

Reader Responses to Can We Kill HIV?

Thank you for highlighting the exciting efforts to develop innovative HIV prevention tools (“Can We Kill HIV?”, May/June 2018). The article’s definition of microbicides as gels is incomplete; other forms include rectal enemas and vaginal films, rings and inserts. The dapivirine ring is the first long-acting product to reduce HIV risk in two large clinical trials and is currently under regulatory review for sub-Saharan African countries where women face the highest risk. (I work for International Partnership for Microbicides, the nonprofit that developed it.)

The piece stated that microbicides eliminate the need for condoms. It is true that women often cannot negotiate condom use, but when possible, they should be combined with HIV prevention methods to protect against unintended pregnancy and other infections.