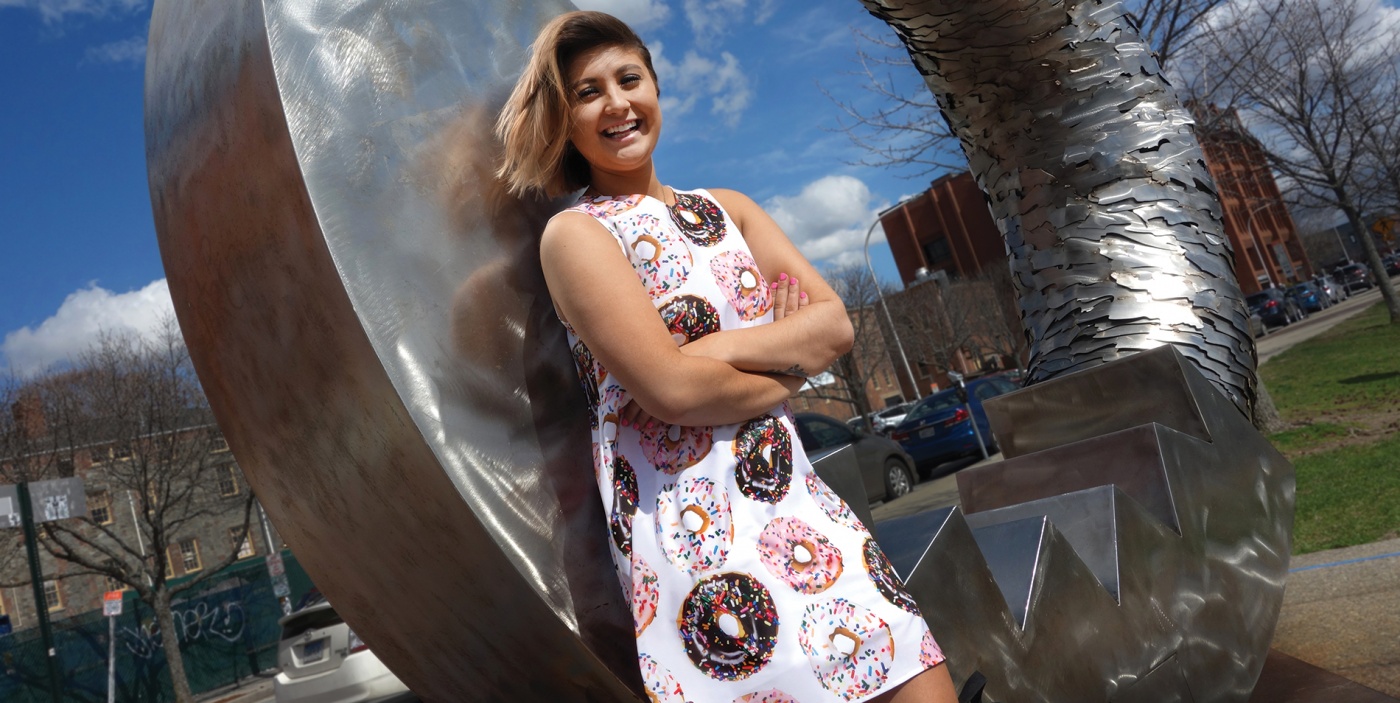 Cholak sports a sweet dress at "TexturedGear," aka The Big DonutPhoto: Frank Mullin

Four years ago, my dad opened a restaurant called Mike’s Donuts and Chicken in Kenosha, Wisconsin, where I’m from. I started working there, and I was in the donut shop all the time. I would have dreams about donuts that I wanted to make, and I could actually make them. I’m not a good artist, but I like to exercise that creative part of my mind. And, well, I love to eat, so it’s just a perfect combination.

Health & fitness check
I played ice hockey here for two years. Unfortunately, I had to give it up because I had too many concussions. But I was recruited here. I did eat donuts during hockey, and my coach would get very mad at me. But I was like, “I can’t help it.” I would bring donuts to the locker room for everyone. . . Yeah, my diet’s not that great, now that I’m thinking about it.”

My first donut that I’d say “got famous,” because [the website] Thrillist reposted it, was the “Nacho Donut . . . But It Could Be.” This was a donut that I had a dream about. It was a yeast donut dipped in nacho cheese and then dipped in homemade, crushed-up tortilla chips, and then in the middle of the donut was a dollop of sour cream, pico, and guac, topped off with a full tortilla chip. I also made donut fries. And then Girl Scout cookie donuts. I created donut pizza.

I’m consumed by donuts. Everything I own is donuts. I’m surrounded by them so I dream about them, I guess. I dream about donuts very often. I have a donut bean bag chair, I have donut pillows, I have a donut trash can, donut carpet, donut backpack— oh my gosh, the list could go on. Every item of clothing you could imagine. Donut shoes. My dad and I have matching donut tattoos.

I created the Brown Donut Club. It is the first and only University-recognized donut club. We do donut tastings. Culturally, we all connect through food. We don’t just talk about donuts, we talk about life. I just did a capstone at the end of last semester and it was called the Donut Queen podcast. In my intro podcast I talked about how donuts can be a vehicle for other conversations and how donuts have been beneficial for me in social situations.

I don’t just love eating donuts. I love making them and being around them and doing research on donuts. Just, everything.

Reader Responses to The Donut Queen