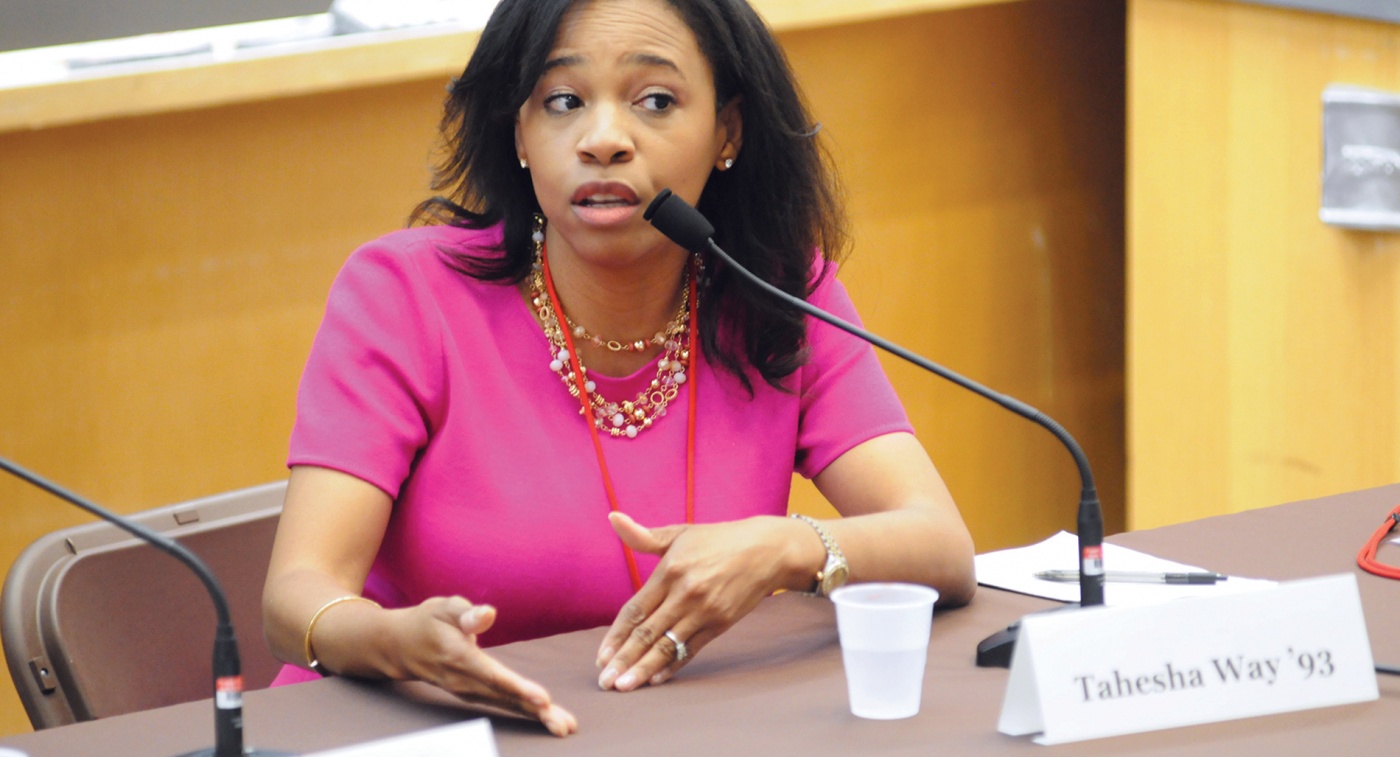 Tahesha Way ’93 at the Commencement forum "Our Politics, Our Future."Photo: Frank Mullin

This was the challenge of a Commencement forum called “Our Politics, Our Future” featuring Suzi LeVine ’93, former U.S. ambassador to Switzerland and Liechtenstein; Tahesha Way ’93, Secretary of State of New Jersey; and Tom Perez ’83, former U.S. Secretary of Labor and current chairman of the Democratic National Committee.

To kick things off, moderator Tad Devine ’78,  a veteran political consultant who served as Bernie Sanders’s chief strategist during his 2016 presidential campaign, lobbed a question that made the room laugh: “What’s going on in America? Please explain it to us.”

Not surprisingly, that question wasn’t fully answered in the ensuing hour. A few key themes:

YOUTH POWER
At one point, Devine noted that in the 2008 presidential election Barack Obama won two states that Democrats hadn’t won in generations, Indiana and North Carolina, by capturing a single age cohort: 18 to 29 year olds. At another point, Perez added that the millennial generation is now the largest voting bloc in the electorate and also the “most altruistic generation, arguably, in American history.”

A PLACE AT THE TABLE
After Way noted that she serves in the first female
majority cabinet in New Jersey history, she quoted former New York Congresswoman Shirley Chisholm by saying, “If they don’t give you a seat at the table, then bring your folding chair.” Later, Perez quoted labor leader Lee Saunders: “If you’re not at the table, you’re on the menu.”

ROCKY TIMES
Intentionally or not, the current president’s name was not uttered. But Perez seemed to allude to the current White House near the start. In the course of American history, he said, we have seen things go awry.  “We’ve seen the Chinese Exclusion Act. We’ve seen the McCarthy era,” he said. “We’ve seen other moments where we seem to turn against each other rather than work together.” We are in one of those moments now, he said, adding that he saw an upside: “The level of engagement I’m seeing now...is unprecedented.”

INITIATIVE
When asked how her Brown years had informed her career,  LeVine pointed to the school’s open curriculum. “If you’re somebody waiting for somebody to tell you what to do, don’t come to Brown,” she said. The school taught her that what you get out of things depends on what you put in. “And so throughout my civic engagement that has been my modus
operandi.”

Reader Responses to State of the Nation

As the parent of a Brown rising senior, I was disappointed but not surprised to read about the “State of the Nation” commencement forum (Elms, July/August). The speakers: three Democrats, no Republicans. The question “What’s going on in America?” would be better answered by a representative of the party that controls the White House and both houses of Congress. Ignoring half the country does not serve students. Conservatives exist, and sometimes have good ideas (for the record, I’m mainstream Dem). The lack of conservative faculty, speakers and ideas on campuses makes me fear for academia’s future. It is starting to cause large swaths of America to lose faith in higher education.