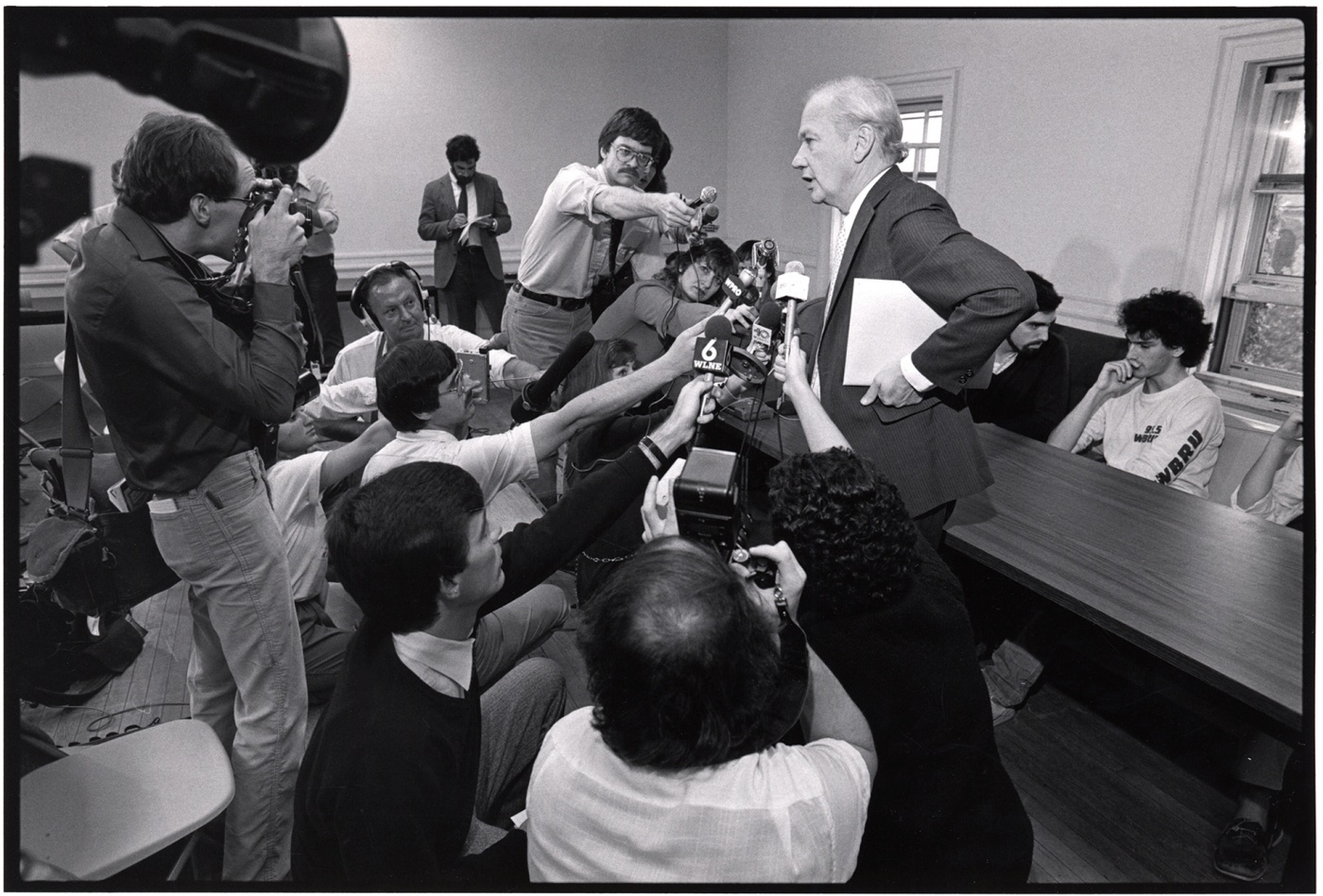 When I edited the BAM in the 1990s I reported to a giant in university public relations, alumni relations, and publishing. Executive Vice President for University Relations Robert A. Reichley expected his team to be relentlessly original in connecting alumni, faculty, and the news media to Brown’s excellence and growth. He could be crusty—we sometimes compared him to news director Lou Grant of The Mary Tyler Moore Show—but he always had our backs, something I cherished while producing one of the few editorially independent alumni periodicals in the country. (His support was no accident: Bob himself had edited the BAM from 1968 to 1971, delivering candid coverage of watershed events in the University’s history.)

Bob’s tenure at Brown was a success by almost every measure. Alumni benefited from his groundbreaking educational programs, such as the popular and enduring Commencement Forums, and from invigorated club activities and reunions. Events organized by his staff brought to campus numerous world leaders and some of the best authors and musicians anywhere. From the mid-seventies on, the University received copious press coverage of academic initiatives, skyrocketing applications, and research breakthroughs, visibility that helped raise Brown’s profile among the most respected schools in the country. His candid approach to public relations was legendary: “Good PR is good policy,” he famously said, ensuring that the press was given information and access that built goodwill and trust.

Over the course of his twenty-seven years at Brown, Bob’s department won more than 400 national awards. He was recognized by the Council for Advancement and Support of Education (CASE) with some of its highest honors, including the Father Theodore Hesburgh Medal for the CASE trustee who exemplified the dedication and leadership of the former Notre Dame president. Three colleges, including Brown, awarded him honorary doctorates.

A SALTY SENSE OF HUMOR

When Bob Reichley died in Providence on May 15 at age 91, he was eulogized as a creative leader, a savvy manager, and a survivor who served successfully under four presidents. Former colleagues remembered his salty sense of humor. When he applied for the BAM’s editorship after an award-winning stint in PR at Culver Military Academy, Bob was told the magazine was only considering alumni for the position. The Ursinus College graduate fired back, “I’m sorry to hear that. I thought we all got over that when Notre Dame hired a Presbyterian to coach its football team.”

He got the job.

The new editor didn’t get much of a honeymoon. It was 1968, and colleges across the country were reacting to turbulent national events. In Bob’s first year, Brown students crusaded for increased admission of minorities, a radical New Curriculum, and coed dorms, and against ROTC and the Vietnam War. Bob covered it all objectively like the former newspaper reporter he was. He was unapologetic in the face of angry letters that poured in from alumni, most of which he published. Given the sophistication of Brown’s graduates, he believed, “you have no choice but to be forthright about what’s happening on campus.” That same year the BAM was named the top alumni magazine in the country.

Later, as Brown’s chief spokesman, Bob answered calls from reporters at all hours. Senior administrators relied on his media savvy to help them craft and deliver public messages about events, controversies, and academic landmarks, and to build productive relationships with elected officials. Bob could be tough on Brown’s behalf, too. When two undergraduates were charged in 1986 with engaging in prostitution off-campus, the media had a field day, producing lurid TV news spots and newspaper headlines. The New York Post’s front page blared, “School for Scandal.” Bob took the unusual step of calling a press conference to personally dress down a room full of reporters for sensationalizing a sensitive story. His gamble risked alienating media contacts, but it resulted in more nuanced coverage.

When he was first promoted from the BAM in 1971 to oversee alumni programs, Bob ran smack into the University’s merger with its longtime women’s college, Pembroke. Combining the women’s alumnae operations with the men’s was a delicate and sometimes fraught process. “I have the blood-crusted shirt hanging in my closet,” he joked later. But ultimately it yielded one of the most honored alumni programs in the country.

One of his first initiatives was to bring coherence and support to the alumni interviewing partnership with the admission office. Fred Volkmann, a veteran college public affairs executive who was then at Washington University in St. Louis, remembers administrators around the country taking notice. “Bob was using alumni to help persuade young people and their parents to consider the value of the Brown experience,” Volkmann says. “Only a few institutions were doing it at the time, and Brown was doing it best.”

He was also a pioneer in alumni education. “Bob was adamant that alumni should hear from Brown for reasons beyond fundraising,” says Sallie K. Riggs ’62, former editor of Pembroke’s alumni magazine, whom Reichley hired to create an education program from scratch. “He used to say that it was faculty who had been our alumni’s main contacts as students, and now we had an opportunity to continue that relationship after graduation.” As a trade magazine noted, Reichley “was famous for insisting that alumni staff always ask, ‘What might be the faculty’s role in this program?’”

Also famous for working long hours, Bob lived an equally full life beyond the office. He loved music, sports, a succession of goofy English setters, and above all his wife, Sara, and their four children, including David ’77. Riggs remembers Reichley leaving a department retreat on Cape Cod to drive to Providence and watch a son play basketball, returning immediately afterward to the Cape.

“Dad’s family was his greatest love,” says his son John. “He was immensely proud of us and supported everything we did. He loved music and was especially proud of the program he set up that brought internationally known musicians to play with the Brown Orchestra. Dad remembered with great fondness watching Mstislav Rostropovich play Frisbee with students between rehearsals.”

Those of us who toiled under Bob’s uncompromising work ethic also enjoyed camaraderie and a rollicking sense of fun at the office. That was part of his genius: hiring top talent and ensuring that everything meshed for the greater good of Brown. We knew how lucky we were: I have never since worked in such a hotbed of creativity and excellence. Now we can look back and realize how lucky Brown was to have Bob telling its story in good times and bad, and extending its renown as a top university. I hope he would forgive the cliché: Bob Reichley was one of a kind—perhaps the perfect PR man for Brown at an unprecedented time in its history.

Writer Anne Diffily ’73 is a former editor of this magazine.

Reader Responses to Robert A. Reichley

There was an error in Anne Diffily’s very fine piece on Bob Reichley (“The Perfect PR Man,” Sept/Oct) and its description of “the University’s merger with its longtime women’s college, Pembroke.” The fact is Pembroke was already part of Brown; it merged not with the University, but with The [men’s] College, the undergraduate college for men.

The background: Brown first admitted women in 1891, established the Women’s College a few years later, and renamed it Pembroke College in 1928. Pembroke and The [men’s] College were what were then called coordinate colleges, and these were the entities that merged in 1971.