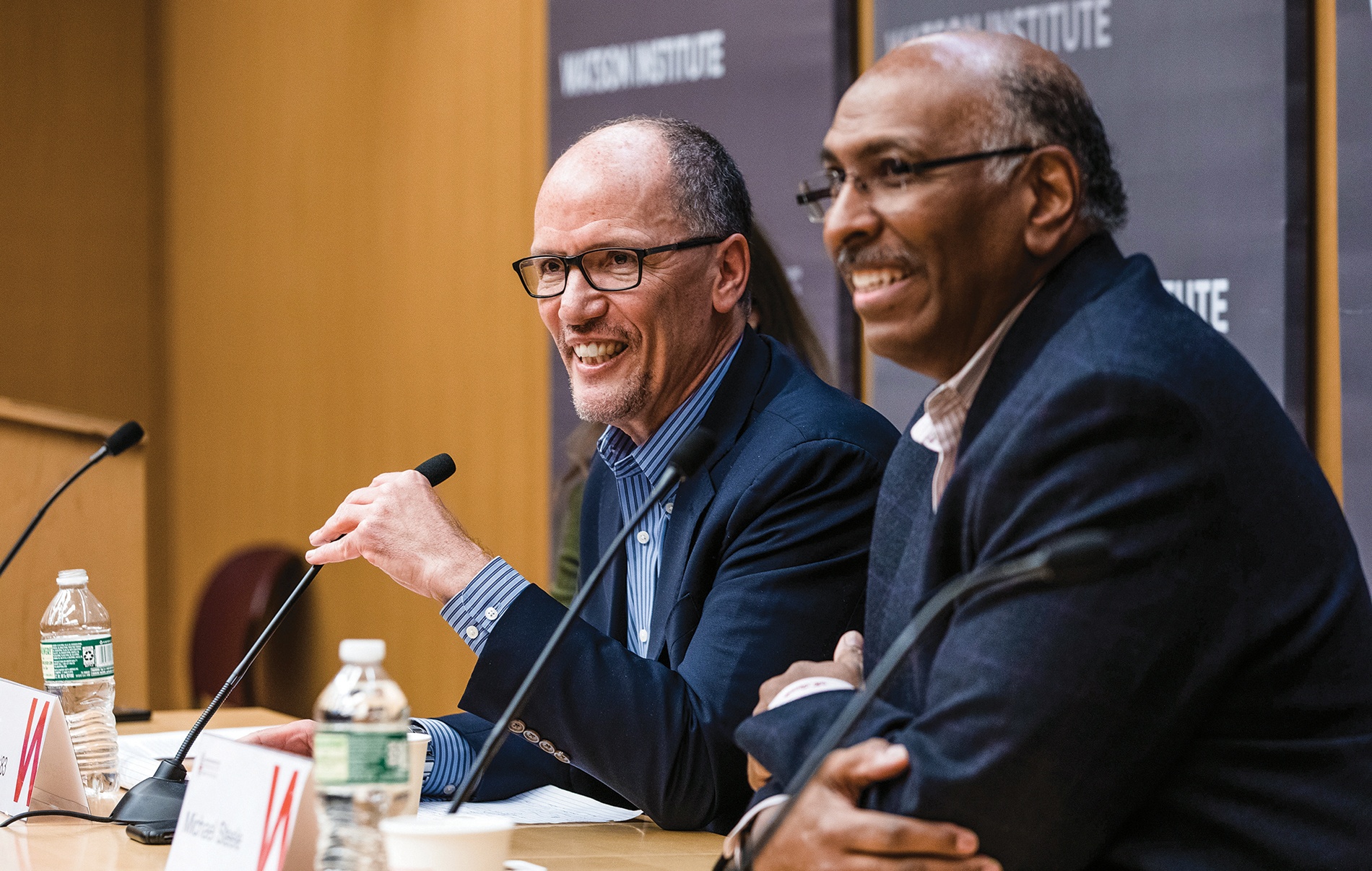 Democratic National Committee Chairman Tom Perez ’83 and former Republican National Committee Chairman Michael Steele, both teaching at Brown—and sharing a small office—discussed the future of American democracy in two moderated panels at the Watson Institute before and after the midterm elections. Their conversation has been condensed and edited.

On the Election Results

Michael Steele: I had raised two questions going into the election: “What kind of country do you want?” and “What kind of leaders do you want to run that country?” Folks are beginning to answer in their own way. It was not so much about the policies or the manic nature of Donald Trump as it was assessing exactly the impact that elections can have, and do have, as well as what role as citizens we can play in that. Citizen responsibility has been amped up. The takeaway from my side is that it is very painful to lose a house that was very difficult to get. We did not lead with our strengths, which were a strong economy, tax cuts—we never made that case. It was frustrating for Republicans to walk away from the policy arguments they could have made. Absent that discussion, I think we left ourselves vulnerable.

Tom Perez: I was thrilled with the outcome, not just how many seats we won but how we won those seats. We became a 50-state party again. We competed everywhere. I’m very heartened by the fact that millenial turnout increased fifty percent. One of my favorite visits I took was the night before the election in Milwaukee, with a group of folks called BLOC (Black Leaders Organizing for Communities). What this group was doing was talking to people. There’s nothing better than peer to peer organizing. It wasn’t a message that came from Washington to every candidate but one that flowed from the bottom up.

“There’s nothing better than peer to peer organizing. It wasn’t a message that came from Washington to every candidate but one that flowed from the bottom up.”

On women in Washington

Steele: I saw that tweet and I hung my head in shame because I knew it didn’t have to be that way. Because I know the inspiring diverse young women in my party who have not been given a voice.

The test for me will be how these women fit into what is an established order. I’ve seen a lot of bright-eyed, bushy-tailed folks come to my hometown of Washington, D.C., ready to change the world—and they in turn were changed. The real interesting test will be how they come in and change the system from within. Or are they changed by the system?

Perez: For the ninety-plus women joining the House of Representatives, this will be an interesting opportunity for them to reset the nation’s course, to redefine its mission in terms of their own lived experience. These are moms, sisters, professionals who bring a whole range of experience that men at Washington typically leave at the door. If the women win the initial round, watch out. Because what comes next is incredibly good for the country but an incredible change for the body politic.

Student protestors interrupted the second debate to call out Perez and the DNC for voting to allow campaign contributions from the fossil fuel industry. The students want the DNC to support a Green New Deal stimulus package.Photo: rythum vinoben

Steele: At this point every state around the country needs to take a step back and take a wholesale look at how they put forward the opportunity to vote. After the election, the president declared immediately: “There was fraud.” If he’s doing this in an election where his name wasn’t even on the ballot, what do you think he’s going to do in two years? So, the pressure now comes on citizens going to their state legislatures, their governors coming in starting January, and calling for independent oversight of the electoral process and the redistricting process, so that when we go into both of those, we come out whole as citizens.

Perez: Let’s move to what we’ve seen this cycle… In Ohio, the Republicans had control of the State House and the State Senate and House of Representatives...what did they do? Passed a law limiting early voting sites to one. I was in Cincinnati, Ohio, the Sunday before the election, and everyone’s applauding the fact that there was a long line at the early voting site. I wasn’t applauding, because they should have had five early voting sites. Hamilton County—Cincinnati—is a big county; they used to have multiple sites. In Georgia we had teams of people who were out there at 8 o’clock in the dark when people were still waiting at line at early voting sites, pleading for people to not go home. In Texas, we litigated a case involving their voter ID law, which required people to travel as far as 125 miles to go to a place where they could get a voter ID. In Florida, there’s something like 14 million adults eligible to vote; and there’s over 1 million adults, mostly of color, who have been permanently disenfranchised. We should be making it easier for people who are eligible to vote, not harder.

Steele: I agree with you on the access and ability to get to the ballot box. We could decide voting is so important that voting is a national holiday. I think it’s important that we protect the integrity of the ballot box, not just in 2020 but beyond. Believe it or not, there are a lot of Republicans who support the kinds of efforts I’ve outlined. As RNC chairman the one thing I always emphasized is that I am never afraid for every citizen to vote in this country. I don’t care really who they vote for, because if I do my job right, you’re gonna vote for my team.

“As you know, there was a war for the soul of the Republican party. That war is over. The party of Lincoln is dead. ”

On the Republican Party

[An audience member asked Michael Steele if he is a “loyal Republican.”]

Steele: Am I a loyal Republican? What the hell is that? You’d have to tell me what that is. I am a Republican because I choose to be. I chose it because this party had a value proposition with the American people, from its very founding, that stood for the rights and liberties of individuals, and the freedoms that attend under the Constitution. That for me is paramount, and why I’m Republican. Loyalty is something that is earned—it’s not given because I’m a member of your team. And if I’m using that as the basis, the party has not been very loyal to the values that I hold dear, that I ascribe to, that drew me into the party...When you turn a blind eye on issues like immigration and start locking up little kids and talking about building a wall…if you know our history as a party, we were always a party that fought for assimilation, we believed in welcoming people to this country. [My views are] consistent with that. I’m not loyal to what we’re espousing today. I’m choosing to stay and fight in that battle and try to get back to those tried and true values we once thought we believed in. This tells me where we are as a country, where you get up in a forum and you question someone’s loyalty to a brand, to a party—and not to the country.

Perez: As you know, there was a war for the soul of the Republican party. That war is over. The party of Lincoln is dead.

Steele: I wouldn’t say the party of Lincoln is dead,
just slightly comatose. Right now, the fight is still worth it.

Reader Responses to Across the Aisle