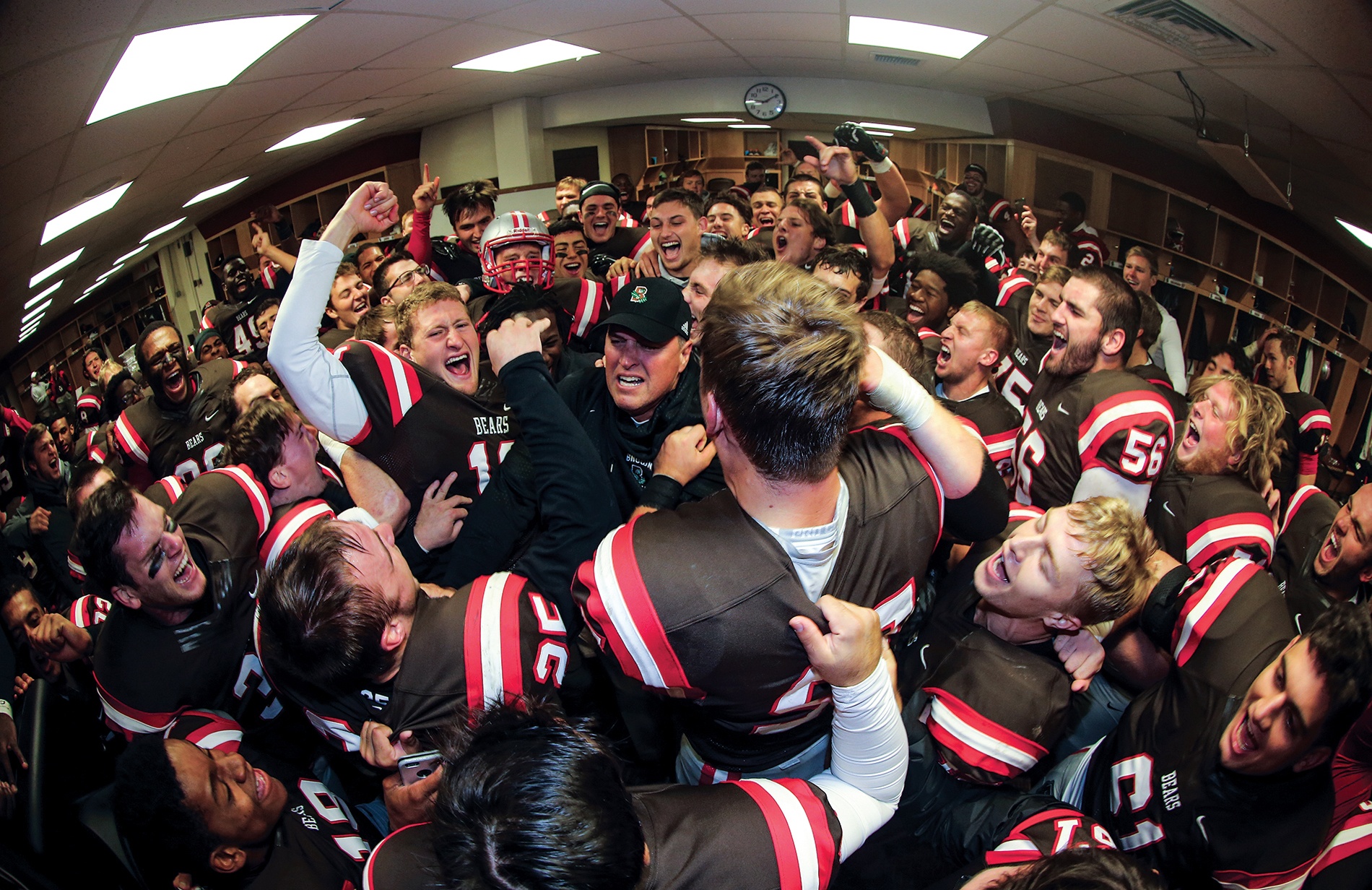 Estes and the Bears celebrate a win over URI at the 2015 Governor’s Cup.Photo: David Silverman
Sports & Recreation

To find a Brown football coach with more wins than Phil Estes, you have to go back to the late 1800s. “Phil Estes simply was Brown football,” said Jack Hayes, director of athletics, when Estes stepped down in November after 21 seasons. Before Estes was promoted to head coach in 1998, Brown had won only one championship since the Ivy League’s inception in 1956. Estes turned that around quickly, winning championships in 1999, 2005, and 2008. Players Estes has sent to the National Football League include 5 Superbowl winners, one of them recent two-time champion James Develin ’10 of the New England Patriots.

Drew Inzer ’01, an offensive lineman with the Patriots when they won the Superbowl in 2002, remembers Estes as the coach who “flipped the switch” for him, taking him from just an athletic guy to a true player. Inzer’s first year at Brown was Estes’s first as head coach. “He harnessed the best of everyone,” Inzer remembers. “My sophomore year we were 7 and 3. The next year we won the Ivies. I don’t think we were the most talented team in the league, but Coach Estes instilled heart and passion and that’s much more valuable.”

Estes’s successor, former Ivy League Player of the Year James Perry ’00, was a sophomore in 1998 when Estes got the promotion. “While we were sad to see Coach Whip leave,” he says, “we knew what we had on staff. Everybody was just so pumped. And  how well it worked out I’m sure everybody knows.”

Estes had an “unwavering commitment to perfection,” Inzer says, remembering the coach stopping a practice to make the team go all the way back to stretches. “He was tough, but he loved us,” Inzer says. “He’ll do anything for anyone.” Inzer remembers “sweating it out” at 6 a.m. at the OMAC, with Estes and the coaching staff working out alongside the players. “The level of intensity that he could bring at six in the morning on a snowy, cold, brutal January morning—how do you maintain that?” says Inzer, now a football coach himself. “It seems impossible to me, but I strive for it.”

For Perry, “quintessential Estes” was his enthusiasm for the Governor’s Cup game. “Some people don’t value it,” Perry says. But Estes valued every opportunity to compete. “He just would always be so excited to play the Governor’s Cup and he transmitted that to the team,” Perry says. It was about love of the game—not about status. “He had his priorities straight.”

Perry, who was quarterbacks coach under Estes from 2007 to 2009, has stayed close to his mentor. “I’ve had the chance to go over to his house and swim in his pool for 23 years,” Perry says. “Heck, even last summer, when I was the head football coach at Bryant, I was still making my pilgrimage to bring my kids to his house. He’s just an open-his-house-to-you kind of guy. He cared about you. I know I’ll carry that torch.”