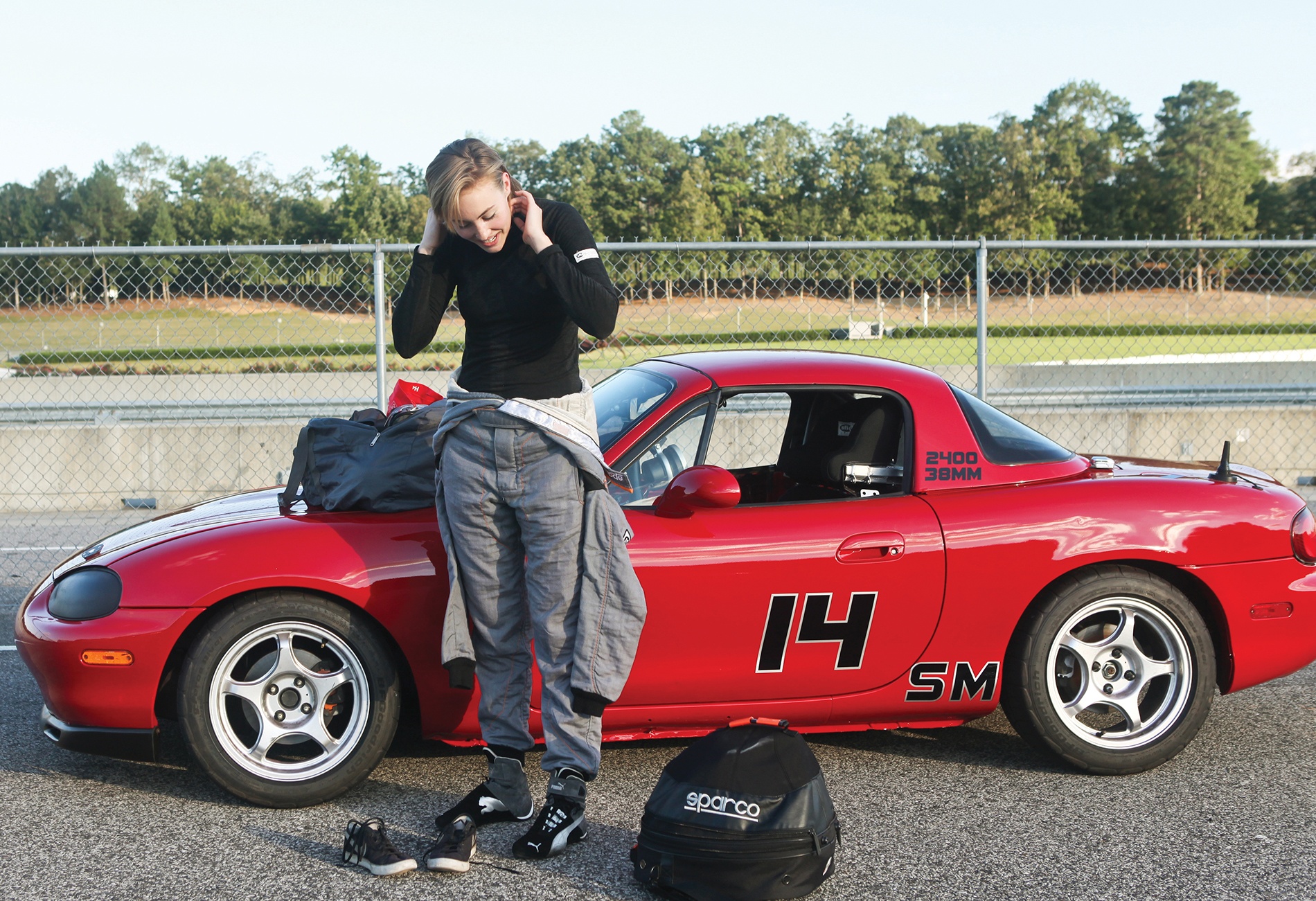 McKee with her race car, Penny. It’s named for all the old pennies McKee found while converting it from a street Miata two years ago.Photo: Charity Ponter
Sports & Recreation

Until recently, race car driver Sydney McKee ’21 was fairly invisible at racetracks, which she describes as typically thronged with male drivers, male fans, and scantily clad “grid girls.” “It was assumed I was a girlfriend,” she says, “not that I was there to race and go out and kick your butt.”

But McKee, an experienced amateur driver, is all about kicking butt—and just made her driving debut in a professional race. Along with her racing partner and dad, Bruce, she came in 20th out of 35 in their class on January 25 at the International Motor Sports Association (IMSA) four-hour BMW Endurance Challenge. “Relatively good for our first [pro] outing,” she comments. “Dad got penalties, which slowed us down. I think you could say we were content with it. The fact that we survived with the car in one piece and got the checkered flag, that’s a win.”

McKee caught the racing bug before she was old enough to drive, when she accompanied Bruce, a real estate developer who’d become interested in auto racing, to Porsche Sport Driving School. Guests, it turned out, got to ride with the instructor. “I’m literally sitting right seat with a professional race car driver,” she remembers.  Sydney was in high school at the time, taking physics, so the instructor’s talk of the science of speed “was making all these connections in my head,” McKee says. “I fell in love with the physics of it.”

Once she could drive, her dad insisted she build her own race car, and she did: a souped-up Miata. Now she’s the driving instructor and co-lead on ergonomics for the Brown racing team, which designs and builds its own formula race cars to compete at the Michigan International Speedway. “Even things like the brake rotors we make ourselves,” she explains.

McKee, who is pursuing a double concentration in engineering and economics, downplays the danger of her sport: “Racing is so much safer than it used to be,” she says, citing better technology. “I’ve crashed and broken my wrist,” she admits, but adds, “a real serious injury happening is pretty rare. That said, my mom was an absolute mess in January.”

She plans to continue racing professionally, and is looking at team management or marketing as possible careers.

Meanwhile, she’s not about to quit driving. “Hardcore power yoga,” a stationary bike, and “lots of squats” keep McKee in shape for handling the manual steering and brakes of a car going 150 miles per hour. “It’s a much more physical sport than most people realize,” she says. She even has a racing simulator in her room: “It’s similar to a video game,” she says, but recreates the experience of driving real tracks—including bumps.

Then there’s racing itself— ten weekends’ worth last year. “It definitely keeps me busy, but it’s one of those things where I’d rather be crazy busy than not be able to do it.”