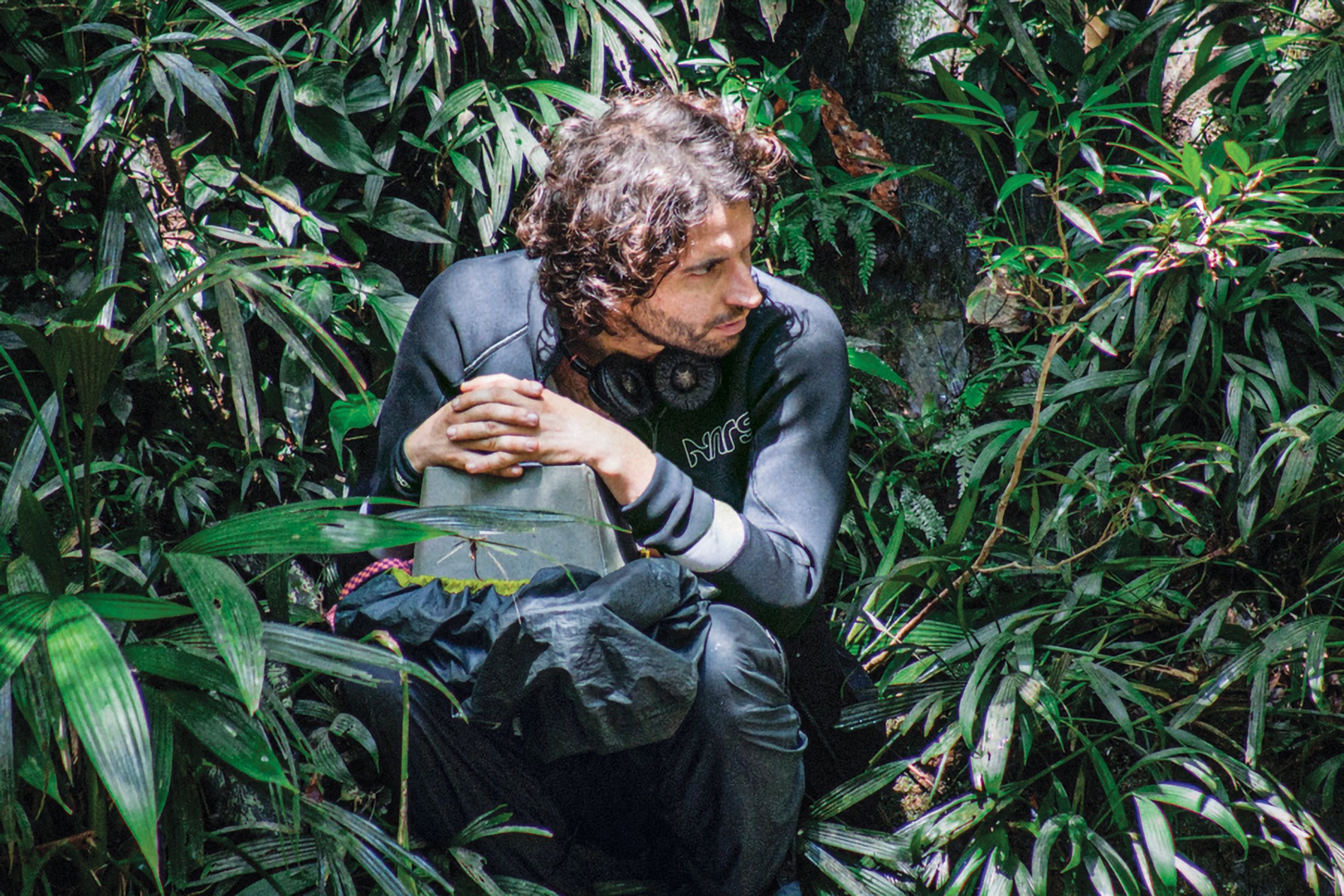 Alejandro Landes ’03 and his crew used helicopters, mules, kayaks, and rafts to reach their locations in the Colombian jungle.Photo: Juan Jos
Filmmaking

Portrait of Conflict
Filmed in the jungles of Colombia, Monos is being compared to Apocalypse Now.

To shoot Monos, his hallucinatory and gripping new film about the moral wreckage of guerrilla warfare, Alejandro Landes ’03 traveled deep into the Colombian jungle. It was a low-budget production that had to grapple with elemental extremes—weather that involved everything from torrential rains to punishing equatorial sun. Filmed in part at the remote Chingaza National Natural  Park, Monos pushed the filmmaker and his creative team to their breaking point.

“This film has all the no’s,” says Landes, who co-wrote the movie in addition to directing it. “It has non-actors, minors, animals, remote locations, helicopters, underwater sequences. Everything was right to the limits of what we could do. Everything about the film involved a lot of risk.”

Landes’s gamble paid off. Since world premiering at the 2019 Sundance Film Festival, Monos has earned critical raves and awards buzz (it’s Colombia’s official Oscar submission). The film, which follows a group of Latin American child soldiers tasked with caring for a prisoner, an American engineer being held for ransom, has drawn comparisons to Apocalypse Now and Lord of the Flies with its portrait of lost innocence and the brutality of conflict. The country is unnamed and the competing ideologies of its warring factions remain opaque, and that, says Landes, is precisely the point.

“Nowadays we try to classify the world,” says Landes. “We try to put stickers on things so that things are divided between good and bad, between left and right, between woman and man, between future and past. These binary ways of looking at the world are generally there to give us a false sense of comfort, so I try to really create films that navigate the tones of gray.”

Landes didn’t study film at Brown, but instead concentrated in political economy. However, he credits trips to the Avon and the Cable Car, as well as classes on Luis Buñuel and the intersection of architecture and cinema, with helping instill in him an appreciation for movie-making. He also believes that his time on College Hill informed his artistic life in other, important ways.

“Brown makes you courageous,” says Landes. “It invites you to places that you don’t know and have no formation in. That’s the kind of film I’m interested in making—where you arrive at a different place from where you thought you would at the beginning of the process.”

Monos hasn’t just earned sterling reviews since it launched in the U.S. this fall. It’s also been a major box office success in Colombia, where it opened in August. It stands to be the highest-grossing Colombian-made film this year.

“The subject matter is divisive and delicate,” says Landes. “Colombia is a country that’s had conflict for 60 years. The first day it hit the cinema not many people went, but slowly word started getting out and people keep going. It’s making a lot of noise.”

Oh, and an Arduino board, a Venturi sensor, Navier-Stokes equations, plus Bernoulli.
Science & Tech

Reader Responses to Portrait of Conflict