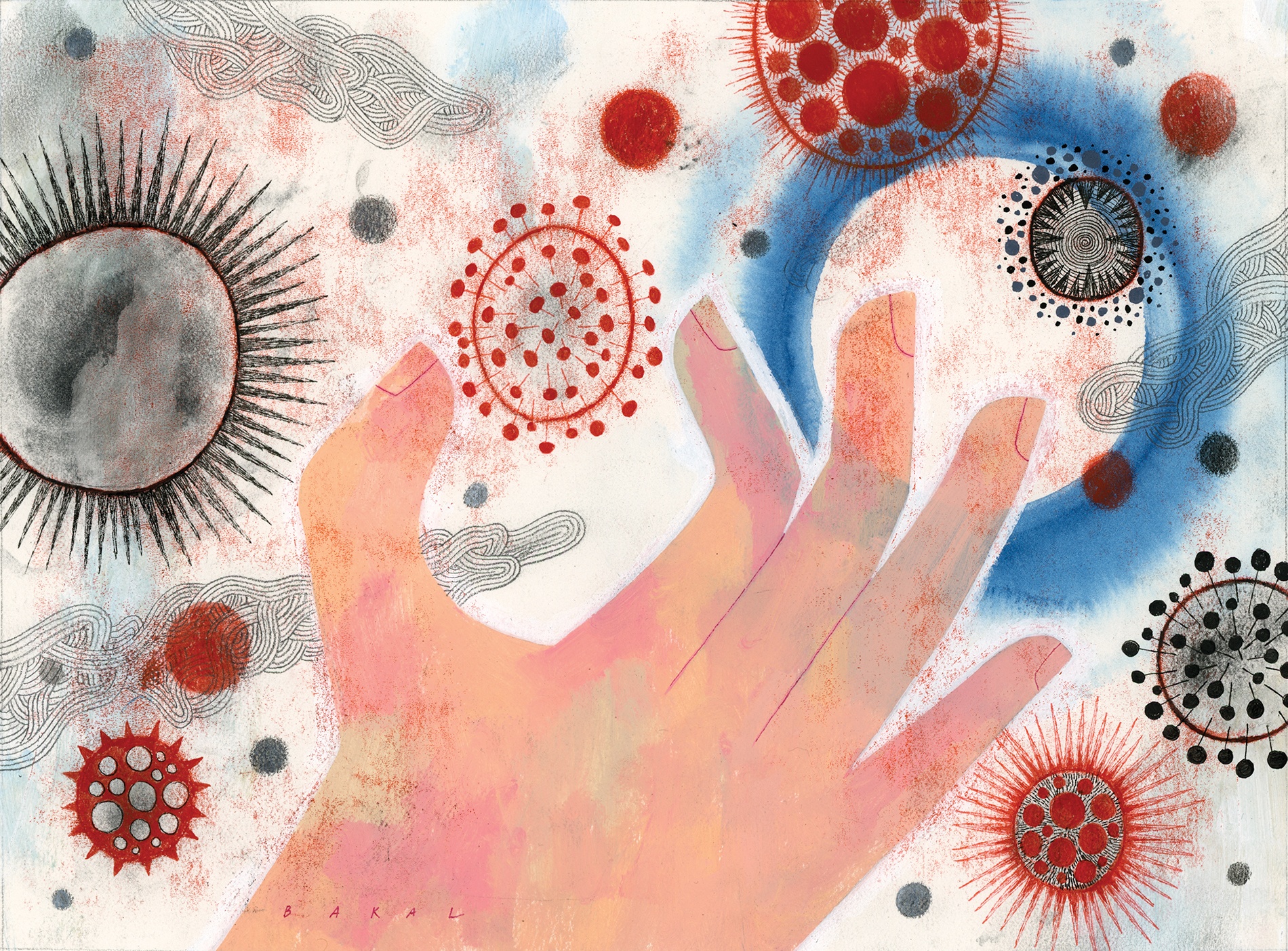 Epidemics 101
Students taking BIOL 0940A could never have dreamed how personally relevant the course would soon become.

When Isaac Nathoo ’21 took a biology seminar called “Viral Epidemics,” he didn’t realize he’d get a chance to see its lessons play out in real life.

Unlike most biology classes, Viral Epidemics devotes considerable time to understanding the economic, societal, and cultural effects of viruses, as well as their biological impacts. “We saw how [viruses] affect real people—their lives and our society,” Nathoo says. “And all the lessons I learned are completely relevant today.”

Taught for the past seven years by professor Walter Atwood, a researcher specializing in human polyomavirus, the class begins with a simple question: What is a virus? Most students don’t know exactly, but learn that a virus is a tiny bit of genetic matter (RNA or DNA) coated in protein that latches onto and hijacks the functioning of a living cell, forcing it to produce more viral agents. Unlike bacteria, which are much larger than viruses and considered living beings because they can self-reproduce, viruses can’t be seen under a microscope and are not alive.

Although viruses have been around for billions of years, humans identified them at the end of the 19th century. The Latin roots of virus mean “slimy, liquid poison.” The name was first used to classify the tobacco mosaic virus, which attacks tobacco plants. As we learned more about viruses, it became clear that they infected every other living organism on the planet, including bacteria and fungi. (There is no proof, however, that viruses infect other viruses.) The majority are not lethal and generally don’t affect our day to day living. Sometimes, viruses can even be kind of good—one virus that infects plankton in the sea plays a role in controlling biomass and preventing algal blooms.

Even before people knew what viruses were, they were finding ways to develop vaccines against them. In 1796, the English doctor Edward Jenner observed that milkmaids who had caught cowpox generally remained safe from smallpox. He tested his theory by taking a scab from a cowpox sore and sticking it in the arm of the eight-year-old son of his gardener. He later exposed the boy to smallpox, and the child was fine; the idea of safe vaccination was born (previously, people had used material from smallpox sores, but that method was much riskier).

Over the course of the 20th century and into our present millennium, the seminar traces the major viruses of the world—polio, malaria, HIV, Zika, Ebola—and efforts to eradicate them or mitigate their effects, allowing students to see the messy, difficult,  and complex process of developing and carrying out vaccination. Viruses are sneaky, ruthless shape-shifters, Atwood says—like burrs that stick to cells instead of clothes. Most vaccines can only spot their protein shells.

“Vaccines see what is on the outside of the virus—but if the virus changes how it looks, they don’t see it,” Atwood says. “They change, they mutate, they jump from host to host. The most dangerous are viruses that jump from an animal host to a human.”

Vaccines themselves are also different. Some are weakened versions of the live virus (think  chickenpox) and usually give lifetime immunity. Others may use a dead version of the virus (polio) or a small piece of the virus (HPV).

Nathoo, who took the class in the fall of 2018, recalls learning about the process for inventing the polio vaccine. Researchers were facing immense pressure to deliver results and released a botched vaccine that actually exacerbated polio infections, leaving more people paralyzed. “It is really a process that takes time to understand how the virus works, its genetics and genomes, and go through the proper steps and testing before getting it out to help people,” Nathoo says.

The class also incorporates student debate around a variety of public health issues—questions like, should the sexually transmitted virus HPV be a mandatory vaccine for middle schoolers? Should the world try to eradicate mosquitoes, carriers of many harmful viruses? “The goal is to really involve them in their own learning,” Atwood explains. “I learn from them and hopefully they learn something from me.”

Kendall Stern ’22, another student of Atwood’s, found the debates were one of the class highlights. Considering the public health logistics of eliminating mosquitoes raised all kinds of questions about how to implement a collaborative, global campaign against viruses, she says, much like we are experiencing now with the COVID-19 pandemic.

“It brought up some really interesting issues of international relations and who is responsible for taking care of these large pandemics,” Stern says. “For instance, whether it’s ethical for countries not affected by the species coming into another environment and wiping out a species there, when maybe that’s not wanted.”

Each student focuses on a particular virus and gives an in-depth presentation on its genetic makeup and history. Nathoo did his on the 2003 SARS epidemic in Asia; as with COVID-19, SARS is a member of the coronavirus family.

From his research, Nathoo saw how people in the affected areas—including Hong Kong and  China—were able to develop public health strategies and infrastructure that ultimately quelled the virus and left them more prepared for the current pandemic.

But studying an outbreak from the comfortable confines of a pandemic-free present was far different from actually experiencing COVID-19 in real time. While both students are grateful to have a broader understanding of how their current experience is something human society has gone through before and overcome, they have been struck by the uncertainty and fear of the moment. Stern lives in King County, which is next to Snohomish County, Washington—where the first cases in the U.S. arose and soon killed more than a dozen patients in the hospital where she was born. Nathoo recalls leaving campus in a hurry and returning home to his parents, both of whom are in their 60s and at higher risk, all the time wondering if he was a carrier.

“When you study it in class you don’t understand how people are feeling—the anxiety and tension,” Nathoo says. “We read that people were in isolation or quarantine, and that health leaders would research the best course forward,  but it is completely different when you are in that situation and trying to decide what to do.”