Joy and Determination
Women’s gymnastics coach Jackie Court led the team through many victories—including a landmark legal win at the U.S. Supreme Court. 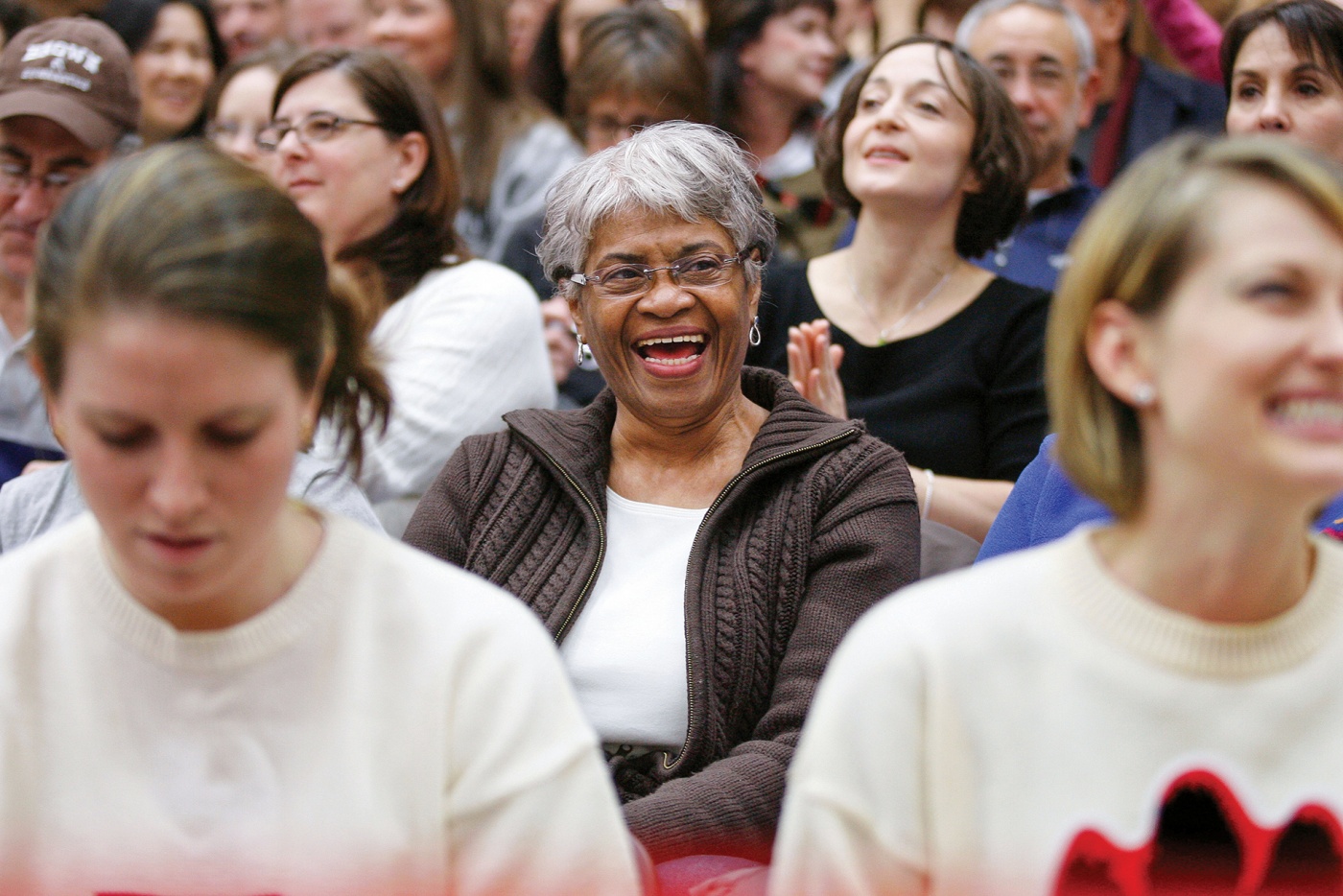 From the briefest encounter to the most intimate friendship, everyone who knew Jackie Court insists that she was “more than just a coach.” Artist, mother, mentor, Court was above all a pioneer who revolutionized women’s collegiate sports in America while fighting for the community that shared her deepest passion: gymnastics.

“That was her inspiration and the platform that launched everything that she did,” says Kenneth Court, the eldest of her two sons. After more than three decades as the head coach of women’s gymnastics at Brown, years of judging competitions, and countless hours devoted to founding the competitive gymnastics program at the Rhode Island YWCA, Court passed away on Easter Sunday, April 12, 2020.

Born Jacqueline Stewart in the Bronx, N.Y., the young athlete grew up with a passion for dance, which she pursued at Hampton University in Virginia. It was there that she met her husband of 50 years, Kenneth Court Sr. The duo elected to settle in Warwick, R.I., and after working as a public-school teacher for several years, Court was hired in 1969 as the first woman of color to coach at Brown.

With her, Court brought determination, poise, and a level-headed coaching style that earned her team countless victories and produced top gymnasts like Debbi Fuhrman ’84, who as a freshman was featured in Sports Illustrated after leading the Bears to an undefeated record in 1981.

“She brought the joy back into gymnastics for me,” says Fuhrman, who at the start of her collegiate career was reluctant to participate in varsity sports at all. Current head coach of Brown women’s gymnastics Sara Carver-Milne recalls the story Court shared with her about recruiting Fuhrman as one example of her pragmatism.

“Jackie made a deal with her,” Carver-Milne reocunts. “Debbi said, ‘I don’t know if I want to do college gymnastics my entire four years,’ and Jackie said, ‘Well, give me two years. I'll get you to Nationals and then you can go do whatever it is you want.’” And in 1982, that’s exactly what happened, with Fuhrman not only becoming Brown’s first gymnast to qualify for NCAA Nationals, but placing sixth in the country for her floor routine.

Coach Court is perhaps best known, however, for serving as the team’s backbone during the landmark Title IX case Cohen vs. Brown University. Following the University’s decision to cut women’s varsity gymnastics in 1991, the class-action lawsuit filed by members of the women’s gymnastics and volleyball teams climbed the judiciary all the way up to the Supreme Court.

“It was really chaotic. We were testifying on a stand, the media was at our competitions with a microphone in our face as soon as we finished an event,” says Lisa Stern Kaplowitz ’95, the final student recruited to
the women’s gymnastics team the year it was cut. “She convinced us that we were going to figure out a way to persevere, and you need that calming presence to help you focus.”

Determined not to lose her team despite a lack of funding, Court used empty lecture halls to host practices and even taught gymnasts to sew their own leotards. “As much as she gave to Brown,” says son Kenneth, “when Title IX happened, she wasn’t afraid to stand up for what was right and change the world forever.” After more than five years of appeals, the final ruling mandated greater equality between men and women in both resources and recruitment for college sports nationwide.

Court’s younger son, John, followed in her footsteps as a head coach of women’s gymnastics in Arizona, and credits his mother for being the inspiration and support behind his career.

“I was basically raised in the gym at Brown,” he says, “running across the floor and crawling under beams.” The younger Court adds that his personal dedication to the sport multiplied during the 10 months he spent as her assistant coach in the immediate aftermath of the Title IX injunction, when the women’s gymnastics team was reinstated amidst continued legal proceedings.

“We were both competitive and wanted to bring the program back to where it was before the university dropped it,” he says. “That was the goal.”

In the decade following the Title IX suit, Jackie Court met and surpassed this goal. She earned a Special Service Award from the National Association of Collegiate Gymnastics Coaches in 1994, followed by a 1996 induction into the Northeast Women’s Hall of Fame, and a 1997 award as Eastern College Athletic Conference (ECAC) Coach of the Year. These titles culminated in a 1999 quadruple victory when she and longtime assistant coach Tom Miller became Head and Assistant Coaches of the Year for both the ECAC and the NCAA Northeast Regional division.

“With Coach Court, the gym was like our sanctuary. We came into our four walls and no matter what was bothering you, it was gone. You came in there and every girl was ready to work,” says Miller, who was quick to add that training was nothing but fun.

“She had a good sense of humor,” he recalls, “If she tripped, she would always turn it into a dance and joke, ‘Oh, I’ve really got to add that into one of the girl’s routines!’”

While Court’s background as a dancer lent her an unflappable grace well-suited for choreography, it was her natural elegance that gymnasts strived to emulate.

“When she walked into the room, everyone stood up a little straighter and pointed their toes a little harder,” wrote Kim Hanley in an online tribute. Hanley was one of the "Saylettes," local kids who spent afternoons practicing back handsprings with Coach Court in the old Sayles Gym. “The smile and roll of her eyes when I’d ask her for ‘just one more spot’ on something she knew I could do on my own—I wonder how she had that much patience! Just her standing near me, reaching out even one finger, gave me the confidence to learn many new skills because I knew she believed in me.”

“She was most proud of molding the young women that she had into leaders,” adds John Court. “Gymnastics was just the vehicle she used to do it.”

While every student athlete who worked with Court can vividly recall her dry sense of humor and unique laughter that “almost sounded like she was crying,” Court derived a special sense of joy in her later years from spending time with her granddaughter Jessica.

“She was like a third parent to my daughter and she’d light up whenever her granddaughter was in the room,” says Kenneth. “When my mother would talk to her, it would remind me of the way that she talked to me when I was a little kid. Brutally honest, but always a smile on her face. Whenever you followed her path or her advice, everything turned out okay.”

Jackie Court is survived by her two sons; a daughter-in-law, Julie Court; her granddaughter; and many dear friends and adoring alumni.

Reader Responses to Joy and Determination

I arrived at Brown the same year as Debbi Fuhrman, not as a prized recruit, but as a junior transfer who hadn’t done gymnastics since high school. I found my way to Coach Court’s crowded office in Sayles (“Joy and Determination, Sept./Oct. ’20), introduced myself, and asked if I could join the team. To the best of my recollection, she said, “Let’s give it a try.” Being on the gymnastics team was one of the highlights of my Brown experience. I wish I’d had the opportunity to thank Coach Court for all that I gained, and to tell her how much I appreciated her ethos of hard work, opportunity, and inclusion. I will always respect and admire her fierce devotion to the University and to the gymnastics program.