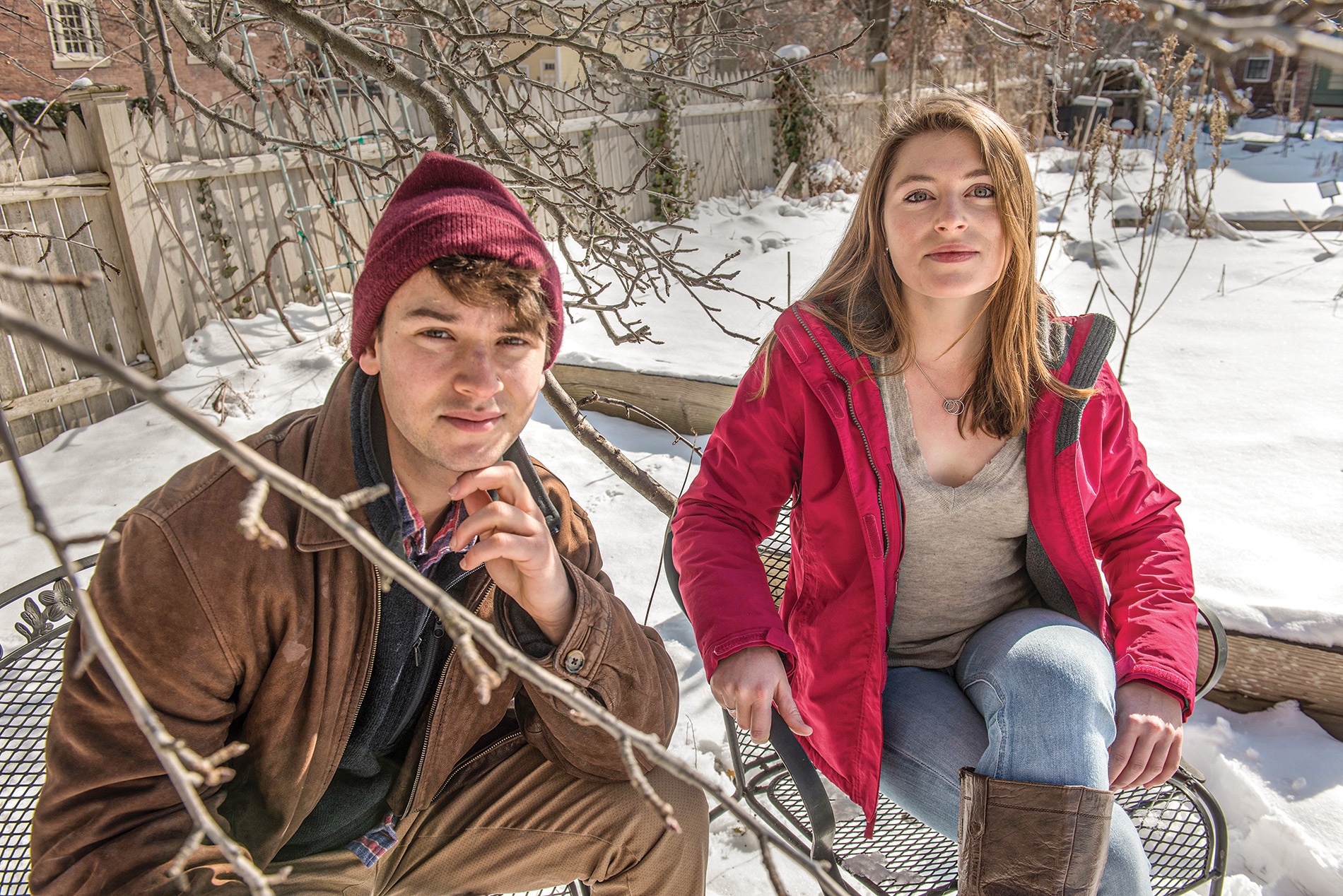 In the Urban Environmental Lab, a small, unassuming building that sits behind a vegetable garden on Waterman Street, students and professors are taking on one of the most powerful forces of the past three decades: the climate denial movement.

“Climate change denial pushed by corporations is a fraud on the American public,” says Cartie Werthman ’21, a senior who is currently working on research for the Climate Development Lab (CDL). “And it’s not the first time that this has happened. This is not a new fraud. This is the tobacco industry’s fight retrofitted toward the fossil fuel industry.” Werthman is one of over a dozen undergraduates researching the climate change countermovement, as members of the CDL refer to it, for the lab.

Professor Timmons Roberts cofounded the CDL in 2010 with the intention of including Brown undergraduates in the process of producing research to inform climate policy. For nearly a decade, Roberts brought Brown undergrads from his class on engaged climate policy to the United Nations Climate Change Conference, where the students presented research on behalf of small and poor countries that did not have the resources to prepare policy materials. But while attending the 2017 conference in Bonn, Germany, where 18 Brown students were working with the poorest 48 countries in the world, Roberts realized that their work would have more impact elsewhere.

• The public relations industry’s most recent campaign for the fossil fuel industry is the Empowerment Alliance, a front group managed by the powerful firm HDMK and funded by the natural gas industry.

• Since 2012, three railroad companies—CSX, Norfolk Southern, and Union Pacific—have paid at least $3 million to the American Coalition for Clean Coal Electricity, a pro-coal group that supports the repeal of the Clean Power Plan, to lobby on their behalf.

“Our president had just withdrawn from the Paris Agreement,” Roberts says, “and we were pressuring other rich countries to fulfill their treaty obligations.” He realized that with the United States out of the Paris Agreement, it was time to “take the lab back home.”

Roberts hired environmental sociologist Robert Brulle to join the lab, “the most exciting sociologist who had a research agenda that was most useful in fighting climate change of any sociologist I had ever seen,” Roberts says. Brulle is one of the nation’s leading scholars studying climate denial, and his addition to the lab helped Roberts to launch a new area of research. While there are a few political scientists and sociologists across the country studying the actors and networks behind climate politics, Brulle is systematically compiling quantitative data to show the scale of this effort.

Brulle has focused on climate denial because “it doesn’t seem to me that we lack a whole lot of solutions about what to do,” in terms of fighting climate change. “It’s not the climate science that we don’t understand. The problem is, we can’t move politically and economically to get action on climate change.”  His research focuses on “getting the roadblock out of the middle of the road”—that is, the climate change countermovement, funded by fossil fuel, railroad, and utility companies. Brulle, along with Roberts, has been helping to guide student research on the climate denial movement.

Werthman and other undergraduates in the CDL have spent the past year digging into the public relations companies that work for corporations promoting climate denial. Werthman developed the idea for the project while looking through industry directories of public relations firms that had been hired by oil companies and fossil fuel trade groups—she realized that the majority of companies doing climate denial PR work had hired the same few firms. Studying these companies is crucial, Werthman says, because they magnify the message of climate denial while enabling fossil fuel companies to hide behind them.

“Several powerful public relations firms have created and amplified the messages of climate change denial on behalf of the fossil fuel industry,” according to the report published by Werthman’s research group. Between 2008 and 2017, the American Petroleum Institute spent more than $50 million each year on contracts with PR firms, according to the report. Last fall, Werthman and the undergraduate researchers she was leading on her report visited Washington, D.C., to present their findings to lawmakers as part of Roberts’s engaged climate policy course.

“I’ve just been blown away by the ability of the people in my group to talk to congresspeople and senators and say, ‘these are the companies that are pushing the message that climate change is an issue we don’t need to focus on,’” Werthman says. “We are able to identify this process that goes on largely in the background that a lot of people don’t focus on and say, this is the reason we can’t pass comprehensive climate change legislation.”

“This is the tobacco industry’s fight retrofitted toward the fossil fuel industry.”

Another teaching assistant for the course this fall, Cole Triedman ’21, added that the research shows that “the failures of climate policy in the last three decades shouldn’t be something we blame ourselves for. In fact, we should direct our blame to the corporate apparatus.”

Triedman led a research project of his own, the findings of which were a significant part of a feature in the Atlantic last December. He worked with a group of undergraduates to investigate the role of utility companies in the climate change countermovement. The final report by Triedman and coauthors Andrew Javens ’21, Jessie Sugarman ’20, and David Wingate ’20 revealed the scope of collaboration between utilities and railroads—which transport most of the country’s coal—in peddling climate change denial. “Tracking the mine to the power plant, we found that an elite cohort of coal companies is dealing with an elite cohort of rail companies,” Triedman told the Atlantic.

Triedman says that the consequences of his and Werthman’s groups’ findings are profound for academics and lawmakers alike. “Things don’t
happen randomly,” Triedman says. “In climate politics, things happen largely based upon an in-
credibly well-funded, well-coordinated, and well- strategized long-term campaign by conservative elites and industry.”

In 1991, the year I joined as executive director, the Tobacco Control Resource Center launched the Tobacco Divestment Project to encourage universities, nonprofits and governmental bodies to eliminate tobacco investments from their endowments and pension funds. The TDP was part of a larger shift within the tobacco control movement. Up to that point, the focus of tobacco control, led by medical providers and the national cancer, heart, and lung associations, was to encourage smokers to quit. Advocates like us shifted the focus to the tobacco industry and its predatory marketing practices to recruit young “replacement” smokers for the 400,000+ Americans who died each year from tobacco-related disease. The underlying problem was redefined from nicotine and carcinogens to greed. The BAM article misses one objective of divestment campaigns. The goal of divestment is not to damage the target companies financially. As the article notes, drops in stock valuation due to cultural/political attacks create opportunities that some investors will exploit. (As we learned, uncertainty about future litigation depressed tobacco stocks far more than bad publicity.) Rather, we sought to discredit and delegitimize tobacco companies so that elected officials would shun contributions from tobacco companies and their officers. Stripped of political cover, these companies could then be more effectively regulated. The argument for divestment is certainly moral but the objective is political.

The students and their professors have assumed that all readers know what climate change denial really means. It was never defined. They would be hard-pressed to find corporate “deniers” who would deny that after over 200 years and a 50% increase in atmospheric carbon dioxide, the Earth’s average temperature anomaly has risen just a fractional amount, less than one degree C. Or that sea level has risen less than a foot. Hardly compelling evidence for a climate crisis or emergency worthy of a denial. The opposite of climate denial is climate acceptance of dire model forecasts with urgent efforts to keep the Earth’s temperature stable. Those global warming goals of zero emissions and Net-zero CO2 drawdowns from the atmosphere of more than just a few parts-per-million. Skepticism is warranted for significant carbon capture and geological storage because just one ppm of CO2 would require the permanent storage of over 7,500 million metric tons (CDIAC). Such a huge amount is beyond the capability of human technology. This huge quantitative barrier to climate mitigation should be acknowledged in any concerns about reversing climate denial movements to achieve the Paris Accord goals.

I read with interest “Follow the Money.” In my day we had Rachel Carson’s “Silent Spring,” and the discussions revolved around the expected new ice age. We have come a long way since then, but old ideas are hard to shed and break. The CDL should devote efforts to debunking these established “scientific facts.”

Cole Triedman ’21 and Cartie Werthman ’21 are to be commended for their fine investigation into those who fund the movement to deny climate change.  It comes as no surprise that those who will suffer most from the environmental proscriptions would oppose them. Now it is time to find out who will profit from the Green New Deal.

The “Follow the Money” article begins with derisive, prejudiced labeling of a diverse group and asserts that their assumed beliefs are the result of money spent by a demonized industry. The assertion is made without talking to people to determine what the beliefs actually are and without determining if they were influenced by, or even aware of, the PR. One could just as easily assert that climate change zeal is driven by the tens of billions of dollars to be made in studies and proposed remedies. The labeling, multiple presumptions, and condescension are prejudiced, unproductive, and fuel division. It would be helpful and informative to actually talk to people to find out what they believe and why.

I would have been more impressed with the “Follow the Money” article about climate denial if the students had done a parallel study tracing the public money that has financed the climate alarmist point of view. And, ironically, in the very same issue of BAM there is this headline: “Bankrolling Justice.” What makes one financial project seem virtuous and another seem corrupt if not our point of view? It seems to me that we are all using our resources to promote what we believe to be good and/or an accurate view of reality.