The View From Tripoli
I went to Lebanon not just to learn Arabic but to take a break from America—and came back with a new perspective. 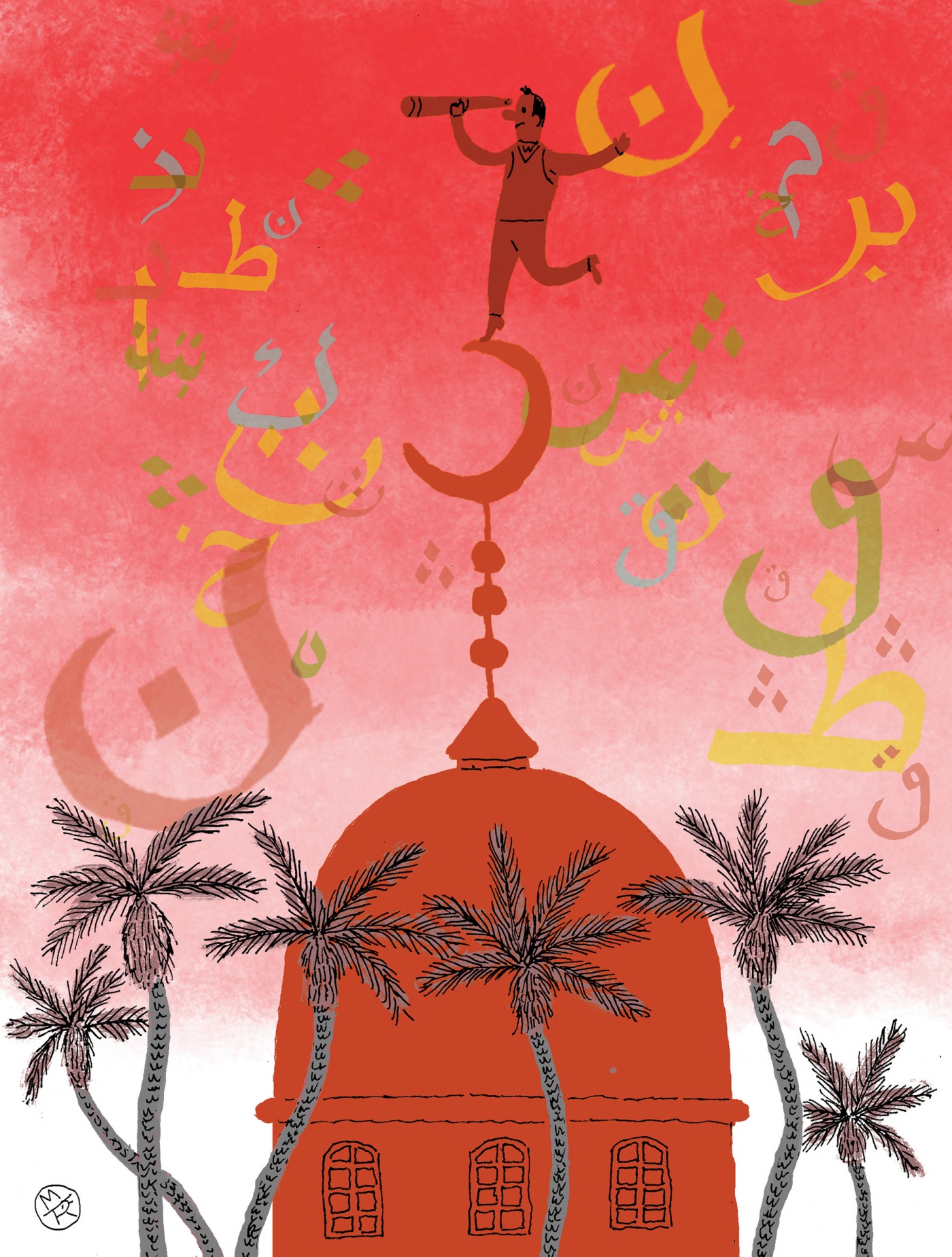 In January 2019, I headed to the Lebanese coastal city of Tripoli, an hour north of Beirut, to study intensive Levantine Arabic (the kind spoken in Syria, Lebanon, and Palestine) at a school called the Levantine Institute. I’d intended to do this ever since I was a kid, when I listened, mesmerized, to my Lebanese grandmother speaking Arabic with her friends after mass at our Maronite Catholic church in Lawrence, Massachusetts. And by my third trip to Lebanon in 2017, it drove me crazy that I could not yet understand a word that Beirutis said to one another. With foreigners, they instantly switch to English—save a habibi (my love, an all-purpose term of endearment) or a yalla! (Let’s go!).

Yet there was another reason I went. I’d spent much of the past few years protesting the cruelties of the Trump administration—the Muslim ban, the child separations at the border, the attempts to take people’s healthcare away—as well as working the prior fall, of 2018, to turn the House of Representatives over to the Dems. Frankly, I was tired of America. More than tired—ashamed. I just wanted to go away to a radically different place where Trump’s daily Twitter inanities were not the end-all and be-all. I wanted to slip out of my American identity and into my Lebanese one for a while. And that included finally cracking Arabic, even if it killed me.

It nearly did. I jest, of course, but I don’t think I accounted, even as someone who has lived abroad a fair amount and who speaks good French and basic Spanish, for just how much it would hurt my 50-year-old head to learn not only a new language, but a new alphabet, five hours a day, five days a week for a solid month.

And I almost literally mean hurt my head. They say the brain loses absorption and “plasticity” as you age—even if studies show that learning a new language apparently is a great way to regain some of that—and it was almost like I could feel my brittle, creaking brain crying out in misery as so many new symbols and sounds, so much new data, was stuffed into it daily at a breakneck pace. In our three-hour break between classes, when my fellow students, from throughout Europe and Australia, often would study at a nearby café, I often would go home and pass out. 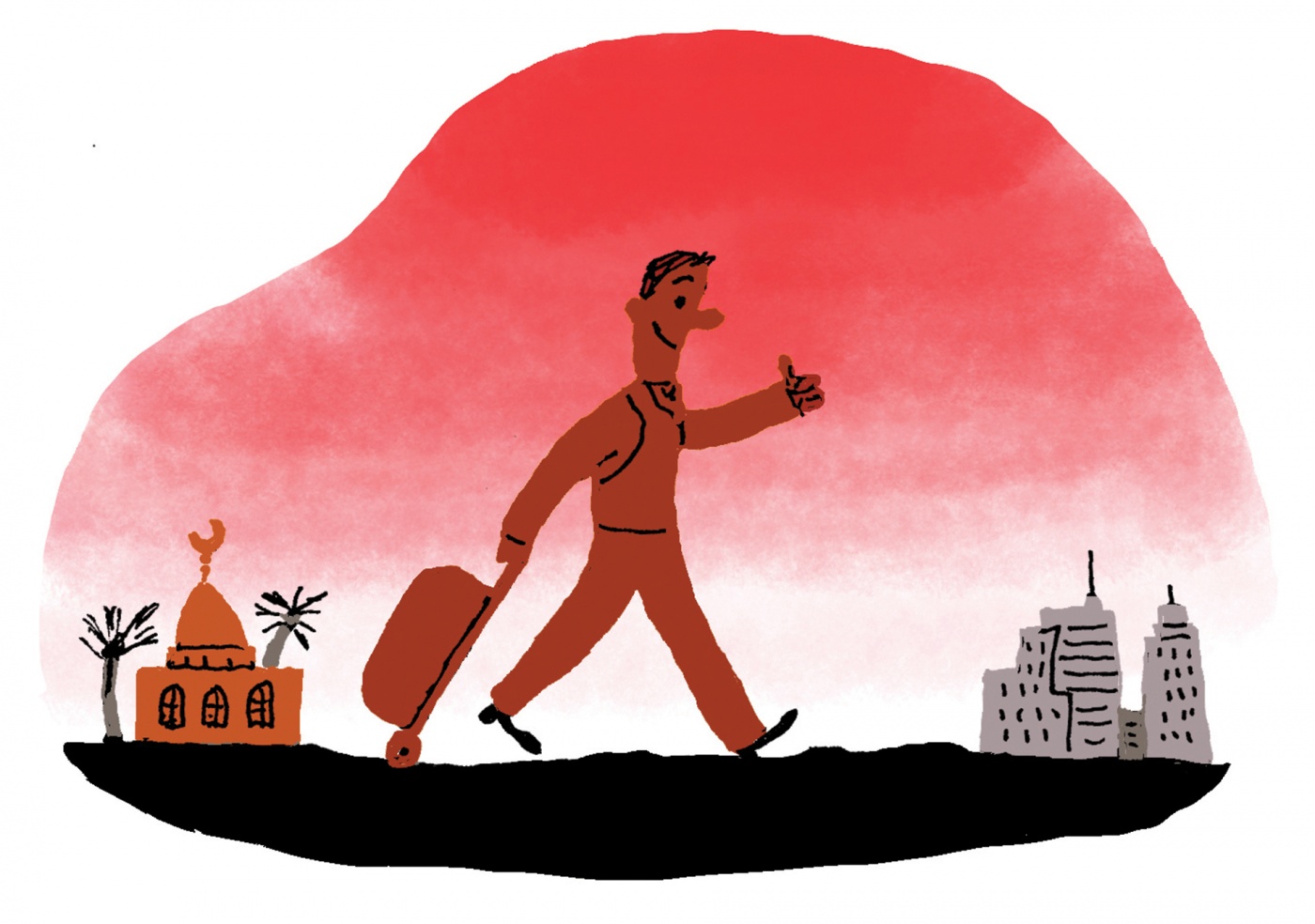 But there was a flip side to all this. I actually was learning Arabic. One night, sitting in a shawarma joint, I watched Arabic words scroll across an LED screen over the counter. “Duh,” I mouthed. “Jeh...jeh. Duh-jej!”

Chicken! I had not only sounded out the word from Arabic script, but I actually knew what it meant! It was that aha moment when two things, the signifier and the signified, came crashing
together.

I would be lying if I said I loved Tripoli, which is both chaotic and highly limited in its culinary and cultural options compared to Beirut, but I certainly loved Traboulsis, the people of Tripoli, who not only speak so little English that it’s a great place to immerse yourself in Arabic, but who were unfailingly warm, welcoming, and good-humored. I wish that more Americans could see the moderate Islam that plays out there every day, with women in hijab and jeans who go to university, work, and drive.

Having said that, I did realize that I am hopelessly American in some ways. It depressed me—as it did many of my female fellow students—to see women so set back in the public realm. In Tripoli, men dominate the street and shop chatter and the nighttime cafés. I could not kick the habit of reflexively smiling hello at women in shops, only to have them cut their eyes away, mortified to be acknowledged by a man not their blood family or husband. Once, in a restaurant, I asked the woman in hijab seated at the other end of the table to pass the salt. Without looking at me, she handed the salt to her husband to pass to me.

I also realized that it wasn’t just many Americans who were ashamed of their country at that particular moment in time. My fellow students from the U.K. were ashamed of the xenophobic animus and ill-considered chaos of Brexit. Those from Australia, Italy, and Austria were ashamed of their own country’s rightward turn, and the French kids were ashamed that the anti-immigrant nationalist Marine Le Pen had come within striking distance of the presidency before losing to a corporatist.

“Duh-jej!”... It was that aha moment when two things, the signifier and the signified, came crashing together.

And though I tend to romanticize Lebanon as a bastion of relative moderation and liberalism in the Middle East, a tiny and fragile country that not only has fended off war the past 30 years but has provided a haven for countless Syrian refugees, I realized that many Lebanese live with their own sense of shame at their government’s tribal, sectarian nepotism and dysfunctionality—drivers behind the country’s glacial Internet service, unreliable power grid, and scarcely potable water. In the two years since, Lebanon has collapsed into complete economic and political disarray, compounded by the burdens of COVID and a neglect-driven massive port explosion last summer that devastated a huge swath of the city and brought to a boiling point citizens’ rage at their useless, selfish leaders.

After six weeks, I left Lebanon finally able to pick out fragments of conversations swirling around me. My brain felt stronger for it. And I feel closer to my grandmother, whose beautiful Levantine inflections I’ve not heard in nearly 30 years.

But more than that, I came back seeing America—and our current moment, now suspended between the hope of a new administration and the dark shadow of right-wing extremism—in a much-needed new light. We’re not special, I realized. For all our wealth and might, we’re just another country capable of shameful setbacks as well as leaps forward. So while I might have left the U.S. on a strong note of khallas!—the Lebanese version of basta! I’ve had it!—I came back with a new dose of Yalla! Let’s go! Shame is just the flip side of patriotism. This fight never ends.

Tim Murphy ’91 is the author of the novels Christodora, longlisted for the Carnegie Medal, and
Correspondents (May 2019). He can be reached at timmurphynycwriter@gmail.com.

Keeping pace with 10,000 alums outside the U.S.
First Person

Neuroscience 10 continues to tickle the grey matter of future scientists—and everyone else.
Student Life

Reader Responses to The View From Tripoli

Murphy is ashamed of our country, functional as a constitutional republic for over 230 years and gradually reshaped to better live up to its ideals by both Democrat and Republican governments. The author is ashamed of the “Muslim ban,” but there never was such a thing. Visas were restricted from countries with known terrorist links. The author is ashamed of the holding of illegal immigrant children in “cages.” Does he realize that this policy began under Obama? Be proud of America and her determination to live up to her founding principles more perfectly every year. Keep working toward the goals for her that are important to you. Others will do the same. Don’t give up trying to use this powerful apparatus bequeathed to us by the Founders.

I am happy for the mental evolution of Tim Murphy. He traveled to Lebanon “tired and ashamed of America.” He returned “seeing America…in a much-needed new light.” Perfection is elusive in the human condition. Mr. Murphy discovered that America does not have a monopoly on imperfection. Let us all work to make America better. Let us all learn to see things in such a “new light.”

In light of his deep shame for America and his joy in discovering roots in Lebanon, why did author Murphy come back?