In early July filmmaker Tala Hadid was stuck in New York City - unable to return to Europe after she'd become a victim of identity theft. As the credit-card company unraveled her account, Hadid spoke by telephone about her short film Your Dark Hair Ihsan, which had just received an Oscar in the Student Academy Awards. For the past thirty-two years, the Academy of Motion Picture Arts and Sciences has held a mini-Oscar competition to encourage young filmmakers, and Hadid, who'd just completed her MFA at Columbia, was one of the thirteen students honored with this year's awards on June 12. 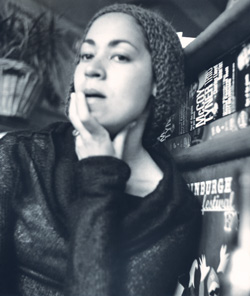 Your Dark Hair Ihsan, which was also her thesis project, follows a young Iraqi man in Europe who receives a phone call from Morocco informing him that his mother has died. He returns to his homeland to claim her effects - all of which fit in a small suitcase - and learns from her landlord that she had been housekeeping for a local family. Hadid cuts between this contemporary journey and childhood scenes of the boy and his widowed mother, Ihsan, as she tries to negotiate a better life for him - so desperately that she arranges to leave him with a benefactor.

Hadid tells the story with spare imagery and a haunting, lyrical soundtrack. She studied painting at Brown, and many of the film's frames feel like still photographs - strongly composed and sometimes even painterly in their texture.

Hadid was born in London, the daughter of a Moroccan mother and an Iraqi father. Her grandfather, a Marxist economist, was imprisoned under Saddam Hussein. As she starts her own directing career, Hadid decries the commercialism of Hollywood and even of U.S. independent filmmaking.

Midway through college, Hadid says, she fell in love with the films of the Italian poet Pier Paolo Pasolini, which she describes in one word: sublime. She collaborated on a film about Pasolini and is working on another about the political theorist Antonio Negri, who translated Spinoza and Marx and was imprisoned for his involvement with the group that killed the leader of Italy's Christian Democratic Party. "I'm reading up on Spinoza," Hadid says.

In early August she left for Morocco to film a trilogy of feature films about three women, focusing, she says, "on the themes of migration, exile, and borders."

"Either that," she said, "or I'll spin out of control and open a fish and chips shop in Honduras.

Reader Responses to Artist in Exile