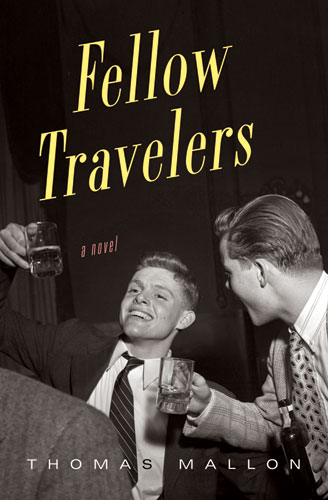 Imagine it’s 1953 and you’re gay—the man in the gray flannel suit with a secret. Now imagine you work for the State Department during the McCarthy hearings, when leaning lavender is as risky as leaning pink.

Hawkins Fuller, the protagonist of Thomas Mallon’s latest historical novel, is a movie-star-handsome foreign-service officer married to a pretty Wellesley grad who is obligingly oblivious to her husband’s late-night wanderings. Among Hawk’s conquests is a milk-drinking young Catholic named Tim Laughlin, just out of Fordham and guilt-ridden by his hitherto unrealized “tendencies.” The two meet by chance on a park bench in Washington, D.C., and Hawk recommends Tim for a job on Capitol Hill.

When Hawkins Fuller is summoned to McCarthy’s security office, the special agent in charge of sexual-deviation investigations informs him, “The moral perversion and emotional immaturity inherent in homosexual behavior make those who engage in it targets of blackmail by anyone seeking to undermine the government of the United States.”Asking Fuller to walk across the room, the man closely observes his gait for signs of moral weakness and then has him read aloud a breathy passage from Of Human Bondage. Administered a lie-detector test, Fuller passes handily. His whole life is a lie; why should he be tripped up by a few questions from a stranger?

The novel is densely packed with minor characters and historical details—so densely that it feels weighted down at times. But the dead-on dialogue and crisp cultural references bring the 1950s to life. And its final act of betrayal is a reminder that the line between victim and villain is razor-thin.