The transition should have been simple. Brown was finally going to ditch its paper-based system of class registration and allow students to register online. Hundreds of other schools had already switched seamlessly to the same software over the past decade. 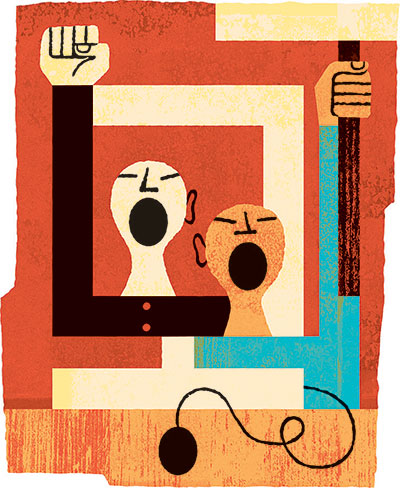 But things did not go smoothly. Some students denounced Banner, the online system, as running counter to Brown’s academic culture, while others disagreed with the initial decision to stop printing the course catalog altogether. Students even created a new protest group, Brown Against Banner.

A little history: Up until the early 1990s, the University gave students a printed course catalog then asked them to fill out a form and turn it into the registrar’s office. One form was completed during preregistration, and an amended version could be filed during the shopping period.

Next came BOCA, the Brown Online Course Announcement. This was a no-frills system that allowed students to look up course descriptions and times online. To actually register, however, a student still needed to fill out a paper form.

Last year four computer science students worked around the clock during winter break to create Mocha. (It doesn’t stand for anything; the developers just liked the name.) Mocha’s software extracted information from BOCA—in computer lingo, this is known as crawling—and then allowed students to search through the data in ways the more primitive BOCA could not. But because Mocha wasn’t integrated into BOCA, it could only be used to gather information. A student still needed to register through Brown’s antiquated system.

Mocha appeared at the same time the University was implementing an ambitious new computer system that promised to integrate various disconnected administrative systems. For the first time, for example, the admission-office databases would be able to talk to ones in the billing and financial-aid offices as part of one, single integrated system. One advantage of the software Brown adopted—it’s made by a company called SunGard and is in use at 1,600 other colleges and universities around the country—is that it allows online registration. Students used it for the first time this spring.

So what’s the big deal? As Associate Provost Nancy Dunbar, who oversaw the project, points out, Banner is a one-size-fits-all system: you adapt to it, and not the other way around. This approach seemed to clash with Brown’s culture. In the past, for example, when a professor restricted the size of a class or established a prerequisite, it was the professor who had the final say. If a class were limited to twenty students, say, interested students could register, show up, and make their case for why they should remain in the class. A sophomore could sign up for a class restricted to seniors and argue for admission after the first course meeting.

The old system had wiggle room, though Dunbar notes that “students perceived even more wiggle room than they had.” On Banner, once a class is full the program shuts down registration. “It was a huge change for Brown students to go from a system that never had any restrictions,” Dunbar says, “to one that did.” To some students, Banner became a threat to the openness and flexibility that are foundations of the Brown curriculum.

Tristan Freeman ’07, vice-president of the Undergraduate Council of Students, acknowledges that wiggle room was an “informal element of the new curriculum,” but adds that “since the rules haven’t been enforced for so long, they’ve essentially become formal in the minds of Brown students.” Dunbar counters that for all of Banner’s automation, students can still meet a professor face-to-face to plead their case.

Some students preferred Mocha’s shopping cart and calendar, which helped students spot courses with conflicting meeting times, to Banner’s blander interface. What’s more, says Daniel Leventhal ’07, one of Mocha’s creators, “The simple act of finding a course on Banner is very difficult.” Leventhal claims that most undergraduates he knows use Mocha to find their classes, and then, as a final step, register using Banner.

Then there are the print fans. After the University announced it would no longer print the course catalog, Finn Yarbrough ’09 printed one himself, working with a local copy shop and selling them for ten dollars each. Demand was so high—Yarbrough distributed 1,800 copies—that University officials soon agreed to pick up the tab and give the pirated catalogs out for free. “The fact is that the Internet has not replaced books,” says Yarbrough. “Even with Mocha, many students find that the printed course bulletin is a useful supplement.”

Dunbar concedes there is more work to do. “Is Mocha an easier search?” she asks. “Yes, it is. But there is no question that Banner works. Does it work elegantly? Well, no, not yet.” She says the University is reconsidering its decision to eliminate a printed catalog and will make a final judgment in the fall. “Everyone has a difficult time with change,” she sighs.

Reader Responses to A Course Change