WHY DIAMONDS ARE FOREVER How diamonds form on the surface of the earth has always been something of a mystery. Originally created 100 miles beneath the earth’s crust, they are forced upwards during underground volcanic eruptions. How do diamonds stay intact despite being heated by volcanoes? Brown geologist James Head ’69 PhD and one of his colleagues at the University of Lancaster offered a possible explanation in the May 3 Nature. They suggest that as the volcanic magma rushes upwards it gathers not only diamonds but liquid carbon dioxide. Then, when that CO2 breaks through the surface, the sudden change in pressure transforms the liquid into a gas so rapidly that both magma and diamonds are essentially flash-frozen. The process is so powerful that diamonds emerge as the hardest substance known on earth. 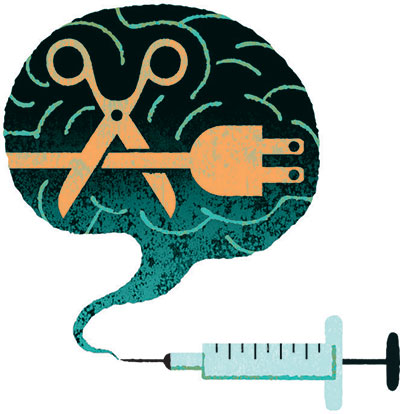 YOUR BRAIN ON DRUGS In a Nature paper published in April, neuroscientist and professor of medical science Julie Kauer shows that morphine short-circuits the brain’s system for creating memories. Normally, the brain’s so-called inhibitory cells limit the release of dopamine, the body’s pleasure chemical. But when morphine enters the bloodstream, “it’s as if a brake were removed and dopamine cells start firing,” Kauer says. Inhibitory cells play a key role in the brain’s system for generating and storing memories.

MEMBRANE MATING AIDS and other viruses can travel from cell to cell in less than a millisecond thanks to a process known as membrane fusion. In an April Developmental Cell article, Brown biologist Gary Wessel and his laboratory team report they have seen and recorded hemi-fusion, a critical step in the process, for the first time. In hemi-fusion, membranes are shared by two cells whose contents remain separate. Hemi-fusion can last for months, with the cells remaining ever-ready to intermingle their contents. Viruses exploit hemi-fusion to spread throughout the body. Wessel hopes his findings might help scientists find new ways to deliver drugs to cells. —L. G.