Founding dean of Brown’s medical school, Stanley M. Aronson led it from 1970 to 1981. A prolific author, he has written hundreds of scholarly papers and books, as well as columns and essays that regularly appear in the Providence Journal. 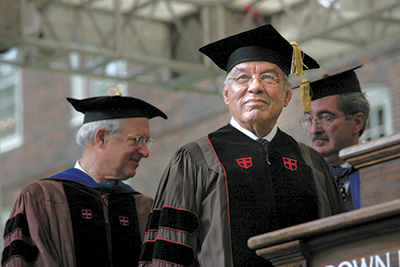 Norman Francis receives his honorary degree
Christopher J. Berman ’77 began his career as WBRU’s sports director and joined ESPN in 1979, a month after it began broadcasting. He’s remained there since as one of the most familiar and respected names in sports.

Actor Kate Burton ’79 is a three-time Tony nominee for her Broadway performances in Hedda Gabler, Elephant Man, and The Constant Wife. Her television role on Grey’s Anatomy earned her an Emmy nomination this year.

Norman C. Francis has led Xavier University since 1968, advising five U.S. presidents on educational reform. For leading the Louisiana Recovery Authority and rebuilding Xavier after Hurricane Katrina, he received the Presidential Medal of Freedom in 2006. 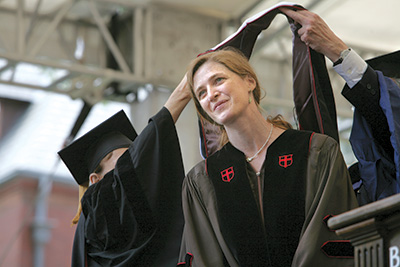 
Marvalene Hughes was named president of Dillard University in July 2005, just weeks before Hurricane Katrina flooded the historic fifty-five-acre campus. She has since led a $400-million plan not only to save but to reinvent the university.

“The King of the Blues,” Riley “B.B.” King has been performing with his guitar, Lucille, since the late 1940s, earning fourteen Grammy Awards, induction into the Rock and Roll Hall of Fame, and the Presidential Medal of Freedom. 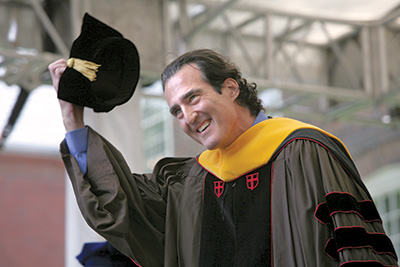 Nobel Prize-winner Craig Mello doffs his cap to the crowd.

Professor of molecular medicine at the University of Massachusetts Medical School, Craig C. Mello ’68 shared the 2006 Nobel Prize for Physiology and Medicine with Andrew Fire. Their discovery of RNA interference demonstrated RNA’s role in gene regulation.

Journalist Samantha Power has won the Pulitzer and the National Book Critics Circle Award for her reportage on genocide and other human rights violations. The founding executive director of the Carr Center for Human Rights Policy, she now teaches at the Kennedy School of Government at Harvard.