On the Saturday of Memorial Day weekend, while their classmates crammed into the First Baptist Meeting House for Baccalaureate services, the women’s rowing team was making history on Melton 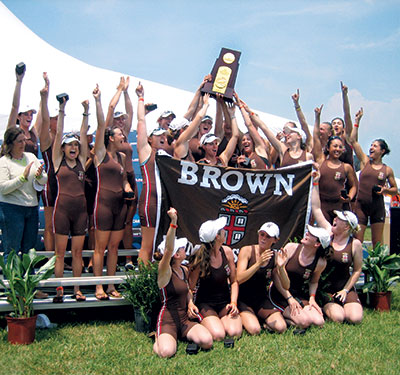 Hill Lake in Oak Ridge, Tennessee. There they captured the NCAA championship for the fifth time in nine years, establishing Brown as the winningest women’s rowing team in NCAA history.

The Oak Ridge contest was hard fought, and none of the Brown crews won a race outright; with a total of fifty-eight points, the women defeated second-place University of Virginia by just four points.

“We have been very fortunate to have good depth,” said Head Coach John Murphy. “As you can see, on a team like this it takes every single person, and we are very proud of them.”

The oarswomen’s 2007 season had started on a high note back in March, when the varsity beat Princeton and Ohio State, both ranked above Brown. The novice and jayvee teams had outstanding seasons throughout, highlighted by victories at Eastern Sprints. There the varsity eight, bested only by Yale, took home silver medals.

Those familiar with Providence’s Seekonk River know that shoving off from the docks at Marston Boathouse habituates Brown rowers to strong tides, gusty winds, and abundant obstacles—bridges, pilings, and buoys. Training rowers to succeed in such rough conditions, the husband-and-wife coaching team of John and Phoebe Murphy has created a succession of talented and fierce crews. 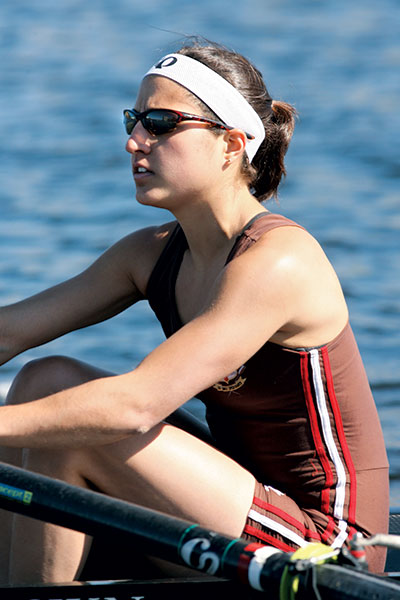 “One of the things about Brown rowing is just the idea of team,” said co-captain Rachel Dearborn, ’07. “It’s never about winning one race or one trophy. It’s about the team doing as well as it possibly can, and we had people doing that all year.”

On the men’s side, Head Coach Paul Cooke ’89 and his speed merchants tested the best teams in the nation and came up just short. The jayvee men’s eight arrived at the Sprints unbeaten and rowed the fastest time in the morning heats, but couldn’t maintain their advantage in the grand final. The jayvee oarsmen earned a berth in the grand final at the IRA championship, but again couldn’t quite get into medal contention. For a crew that won far more shirts this year than it lost, the lack of medals provided a bittersweet end to a successful season.

The varsity eight pulled in a goodly number of shirts during the dual season as well, with the high point being a victory over a highly touted Princeton boat. Sprints saw the varsity fail to medal as well, and the crew felt it had a lot to prove at the IRA. Brown survived a brutal semifinal to race another day. The final, highly dramatic until the last, saw the Brown oarsmen wait ten minutes after crossing the finish line to learn their fate. In the end, Washington took first, Harvard and Stanford tied for second, and Brown finished fourth, less than a second back of the medals. 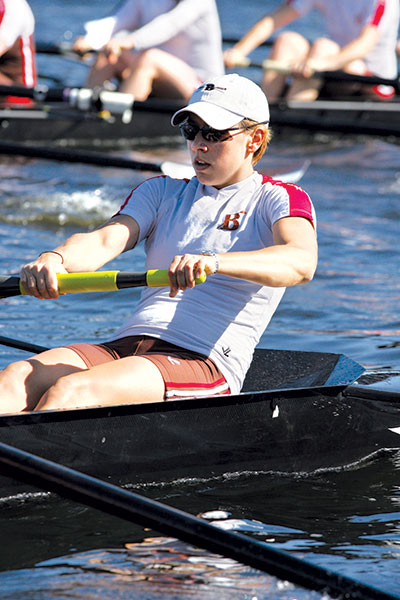 The impressive Brown freshmen, coached by Luke McGee, had a single loss during the regular season (to Harvard), won the Eastern Sprints (that’s a lot of shirts), and finished second at the IRA. “It was definitely a smaller group,” McGee said. “They only averaged 185 pounds, but they raced real hard through the year and were a lot of fun to work with. They were fun to watch.”

In late June the rowers flew to Henley-on-Thames, in England. There, the women won the Henley Women’s Regatta, capturing the elite eight Sports Council Cup June 24. Then they joined the men to compete in the Men’s Henley Royal Regatta in early July. The women made it to the semifinals in the Remenham Challenge Cup for international eights, but were overpowered by Germany’s Dortmund Club.

Harold Ambler is writing a history of Brown crew.