The View from Ringside

Once a month Karyn Bryant goes to work. She leaves the comfort of the Los Angeles home she shares with her two dogs, her husband, Wade, and their toddler, Aurora Melody, and catches a plane to Las Vegas, Atlantic City, or Kissimmee, Florida, where she drives to the local sports arena. Sitting ringside, she takes on her role as fight announcer for Showtime Championship Boxing. 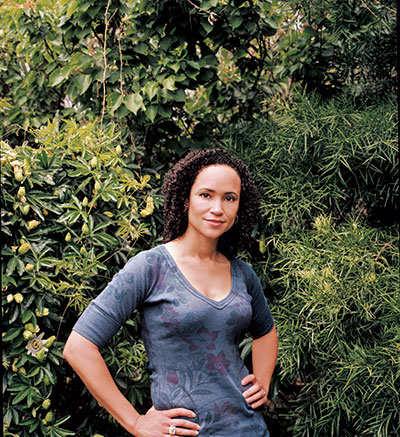 After fifteen years of dealing with the inflated egos of so many entertainers, Bryant says she finds boxers a refreshing change.
Bryant finds boxing exhilarating. Referring to her daughter, she says, “I joke that I cooked up this little adrenaline monkey because she went to a bunch of fights when I was pregnant. When Aurora was two months old she went to a fight, and we had a credential made up that was literally about two-thirds the size of her body.” But is a boxing match anyplace for a child? “I’m not going to lie,” Bryant says. “Boxing is brutal.”

Interviewing fighters before matches, she’ll ask about their personal lives. “The next day,” she says, “you’re watching some twenty-two-year-old guy who you know is going to get married a week later with a face that looks like a side of beef that’s just been pounded on. It’s heartbreaking when you see people you’ve kind of gotten to know and they’re whaling away on each other.”

A self-described tomboy, Bryant says she found work as a deejay at WBRU after failing to make Brown’s first-string softball team. Juggling concentrations in sociology and political science, she became the station’s music director in her junior year and landed an on-air job at MTV right after graduation.

“Mark Wahlberg used to come by with Leonardo DiCaprio,” she recalls. “They were just nice young kids then.” Rattling off a list of famous musicians she befriended during her MTV stint, she says, “Last year I had a fight in Cleveland, so we went to the Rock and Roll Hall of Fame and saw this installation for Nirvana’s first performance on MTV. I looked at my husband: ‘Yeah, I was there.’”

Bryant later hosted TBS’s Movies For Guys Who Like Movies and in 2005 co-anchored CNN’s Showbiz Tonight for a year. Shortly after she left that program, her agent met with Showtime executives on behalf of another client and learned that the network planned to expand its boxing coverage. “There was still this Showbiz Tonight billboard with a picture of me at 51st and Broadway,” Bryant recalls. “So when the producers said they wanted somebody new for their fight team, my agent said, ‘Does it have to be a guy?’ He walked them over to the window and said, ‘How about her?’”

Showtime executives liked what they saw, and more importantly they appreciated what they heard from the voluble, sports-savvy Massachusetts native. Since joining Steve Albert, Al Bernstein, and Jim Gray providing color commentary for boxing matches, Bryant says she’s become a bit of an odd bird among her friends: “One girlfriend is really into boxing so I can talk about the fights with her, but with my other friends, what I do is kind of lost on them.”

After fifteen years of dealing with the inflated egos of so many entertainers, Bryant says she finds boxers a refreshing change. “On Showbiz Tonight you’d see a lot of self-important people coming in with an entourage; I really was not impressed,” she recalls.

“Whereas when an athlete walks into a room and I see he has zero percent body fat and he’s been training eight weeks, three sessions a day, and then goes twelve rounds—I’m impressed.”

Reader Responses to The View from Ringside