On a quiet gray morning late last August, my five-year-old grandson, Eamon, and I faced each other to begin a game of checkers. We sat on my daughter’s screened porch at a table littered with cereal bowls and half-finished glasses of orange juice. Inside the house the atmosphere was as dense and still as the weather. Eamon’s sister, eight, read in her room, and his little brother was busy at the swing set. Their mother worked wearily around the house. The scent of divorce was in the air. 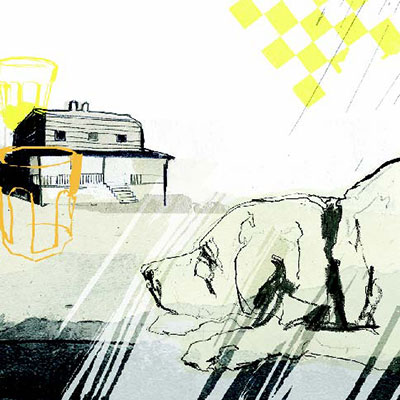 “Give me some king-me’s,” said Eamon gleefully as we set up the board. “I want some king-me’s.” Clearly this would be a challenging first lesson. I showed him how to set the pieces on the board. He wanted to fill every dark square, and I explained that there would be no place to move. I showed him how to jump pieces, and he beamed, leapt over several spaces, including the white ones, and grabbed my piece. I told him he couldn’t use the white squares and had to move diagonally.

I showed him how to capture my pieces, how to set up for a move. Winning, he advanced ruthlessly toward king-me’s, pushing the checkers like toy trucks and surrounding me with his ill-gotten kings. Then he wanted to play again. This time I relaxed into the surrealism of it all—Alice at the Mad Hatter’s Tea Party.

While we played, Emma, the ten-year-old family dog, blind from Lyme disease, lay panting under a tree. I couldn’t see her bulging milky eyes, but I visualized them and recalled the day she was rushed to the emergency vet. Now she had to be led everywhere. When unattended, she sometimes fell down the stairs, off the porch. Her failing health seemed a metaphor for this marriage that was, like our checkers game, leading crazily and inexorably toward a “you win, I lose; I win, you lose” conclusion.

Like Emma’s Lyme disease, the unraveling had begun unnoticed and festered slowly; silent grievances grew into subcutaneous boils that erupted as summer began. By now the tears and fights were daily occurrences, the pent-up resentments on the table, a table as messy as the one before me, smelling of sour milk, soggy cereal, and fermenting juice. And there at the center lay Emma, as old as the marriage.

She died last January on a day of nasty snow and sleet—“mixed precipitation,” as they say here in Maine. With Emma trembling in the rear of the van, my daughter and I made the slow, treacherous drive to the vet’s. There we met up with the children and their father and were admitted through a private side door. In the examination room everyone cried, and then the children and I moved to the waiting room and read “The Three Little Pigs.”

Summoned back into the examining room, we were surprised to find Emma transformed from a sweaty bug-eyed apparition to a serene and beautiful creature. We stroked her thick, still-warm coat and talked about the old days. My former son-in-law and I were able to share a few words. We went across the street for pizza, and I was reminded of other wakes, other funerals, and always the food at the end.

Now it is summer again. Eamon is not much better about checkers, but I am; I just follow his lead. And I am getting used to the divorce. Again, Alice is my guide at this crazy tea. “It’s the stupidest party I ever was at in all my life!” she says, departing. Then, noticing a door in a tree, she pauses. “Everything is curious today,” she adds, “I think I may as well go in at once.” And in she goes.

Jean Sheridan, a former University of Rhode Island librarian, has retired with her children in Maine.

Reader Responses to Checkers with Eamon