For the past two seasons, the Brown football team has been able to turn to a star player to lead the way. In 2005, running back Nick Hartigan ’06 set every major rushing record in school history. The next year, linebacker Zak DeOssie ’07 was the backbone of the defense before graduating and joining the NFL’s New York Giants. By contrast, this year’s edition of the team features a no-name defense with eight returning starters. These veterans will need to keep opposing teams out of the end zone while Brown’s less-experienced offense matures. 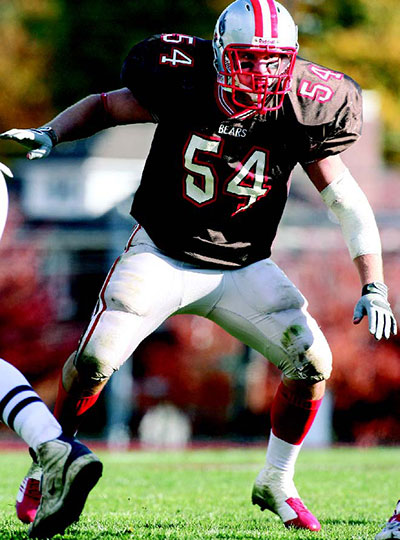 “When you lose a quality player like Zak DeOssie,” head coach Phil Estes says, “you’re going to have some holes to fill. But I truly believe defense is never about one guy. It is about a team and how they play together as a unit. I’m counting on the defense to be a real strength of the club and the defensive line to be a mainstay.”

Tri-captain Eric Brewer ’08, an All-Ivy honorable mention last season, headlines the returnees at inside linebacker. He finished second on the team and eighth in the Ivy League in tackles in 2006.

“Eric Brewer just came into his own last year,” Estes says. “Zak got all the accolades, but Eric Brewer showed up game after game, and you saw his tackles and his production increase with each game.”

Frank Nuzzo ’09, who made thirty-seven stops during the 2005 championship run, took last season off from school. He returns this season to the other inside linebacker position. The two outside linebacker spots opened up after graduation last spring. Jon May ’09 and Miles Craigwell ’09 are both making the transition to the linebacker corps from different positions, but both are excellent athletes and should see time on the outside.

Brown’s other All-Ivy returnee on defense is free safety Jose Yearwood ’08, a hard-hitting defensive back who earned All-Ivy honorable mention last year after ranking third on the team and sixteenth in the conference with sixty-six tackles. Joining Yearwood in the defensive backfield are cornerbacks Darrell Harrison ’09 and Matt Mullenax ’08. Harrison earned a starting role last season and piled up fifty-six tackles, while Mullenax is one of the top cover corners in the Ivy League and led the team with three interceptions. The other safety spot will come down to a competition between Nick Anastasio ’10 and Chris Perkins ’10.

On the other side of the ball, the biggest question mark is who is going to replace quarterback Joe DiGiacomo ’07, a second team All-Ivy performer in 2006. The best quarterback on the Brown sideline is new assistant coach James Perry ’00, former Ivy Player of the Year and Brown’s career passing leader.

Unfortunately for Brown fans, however, Perry has used up his eligibility and will instead have to mentor Michael Dougherty ’09, who coming into the season had completed just three of ten passes for forty-seven yards in his varsity career.

Fortunately, Dougherty will have a skilled group of receivers to ease the pressure. Sophomore wideout Buddy Farnham ’10 comes from a talented Brown football family. His father, Mark ’80, and his uncles, Bob ’77 and Paul ’85, were each All-Ivy wide receivers at Brown and wore number 46. This year, the youngest Farnham will carry on the tradition and don the family number after wearing number one last season. Although he has big shoes to fill, he turned in a solid freshman season, ranking fourth on the team in receiving yards with 191. 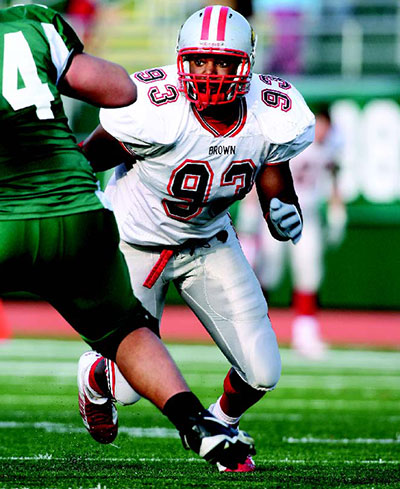 Defense end Kai Brown ’08 had a knack for tackling opposing players behind the line of scrimmage in 2006.
David Silverman

Paul Raymond ’08, a two-time Ivy League/Heptagonal champion in the sixty-meter dash, ranked fifth in the conference last year with forty-five catches for 654 yards. Wide receiver Bobby Sewall ’10 is a versatile player who could also see some snaps at quarterback. Tight end Colin Cloherty ’09 has good speed and size at six-foot-three and 225 pounds.

“We feel our strength is going to be our receivers,” Estes says. “I think that between Raymond with his speed, and Farnham, Sewall, and Cloherty, we can take a lot of pressure off the quarterback because those guys can make a lot of plays.”

On the ground, the Bears will look to tri-captain Dereck Knight ’08, who carried the ball forty-nine times for 213 yards last season. Jonathan Edwards ’09 should also see time in the backfield.

Clearing the way for Knight and Edwards is a revamped offensive line that lost three starters. James Tull ’08, tri-captain A.J. Tracey ’08, and Matt Adkins ’09 are all returning veterans, and Shane Kelley ’09 earned several starts at the end of last season. Mark Callahan ’10 and Paul Jasinowski ’10 both played well in the spring and should see significant playing time.

One of the keys to Brown’s success this season could be special teams. The Bears are fortunate to return Steve Morgan ’08, who earned first team All-Ivy honors as a kicker and second team All-Ivy recognition as a punter last season.

Preseason prognosticators haven’t given the Bears much respect. Reporters picked Brown to finish seventh in the eight-team league, but Estes says he will just use that as motivation for his players.

“We’ve got something to prove,” said Estes. “If we come together and we play as a team and we cut down on the turnovers, we can play with anybody in the league. I’m not going to say that we have all the name talent that some of the other teams have. I just think we have a lot of rising stars, a lot of guys that are going to have a chance to make a name for themselves in this league this year.”