With seven Ivy titles and eight NCAA tournament appearances in his twelve years as head coach, Mike Noonan has turned soccer into the fall season’s hottest men’s sport. Predicting that the men’s team will once again have a strong season is akin to picking Tiger Woods to win your local club championship—it’s a no-brainer. 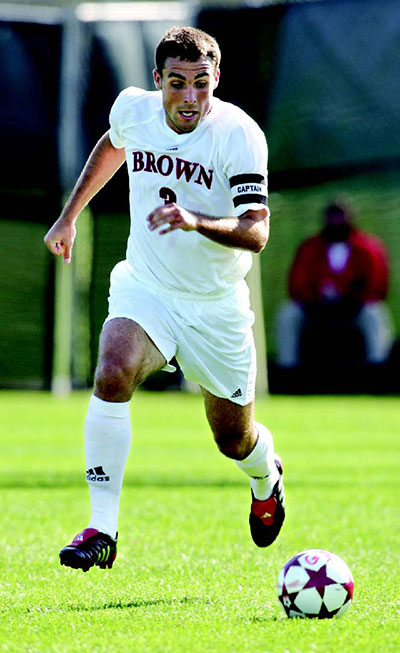 Co-captain Matt Britner ’08 is one of the men’s soccer team’s veteran back four.
David Silverman

Although Noonan will have to replace Andrew Daniels ’07—last year’s leading scorer, who was drafted by Major League Soccer’s FC Dallas—he does have Rhett Bernstein ’09, a first-team All-Ivy defender who tied for the team lead in goals scored last season with eight. Bernstein has been added to the watch list for the prestigious Hermann Trophy, which is presented to the top collegiate player in the country.

“It is clichéd, but defense wins championships,” says Noonan. “It is obvious to anyone who looks at our team that that is where our strength is, and we’re going to have to rely on them to play well and to keep us in games. We’ll still score some goals, but the main thing is to keep it clean in the back.”

Goalkeeper Jarrett Leech ’09 will be key. His play has been impressive, and he led the Ivy League last year with seventy-six saves.

The offense should come from forwards Dylan Sheehan ’09 and Kevin Davies ’08, along with midfielders Nick Elenz-Martin ’10, Chris Roland ’10, and Darren Howerton ’09.

— G.M.
What do you think?
See what other readers are saying about this article and add your voice.