History On the Move

It was a little like watching a glacier move. From July 31 to August 2, University employees and College Hill neighbors stopped by several times a day to monitor the progress of the Peter Green House, as it was hoisted off the Angell Street foundation where it has sat since 1868, and hauled to Brown Street 450 feet away. The mammoth wooden building, which houses half the History Department, has sweeping columned porches and a complex, gabled slate roof. It weighs 321 tons—something you wouldn’t think about unless you had to engineer a hydraulic suspension system to lift it. 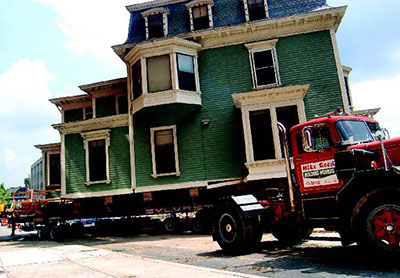 The Peter Green House hitches a ride to its new home.
Frank Mullin

After months of work on the old and new foundations, engineers slipped massive steel I-beams under the house and pulled the building off its old foundations.

Progress was slow. Very slow. By day’s end, the building had been inched into the street and rotated ninety degrees. The rambling structure seemed like a Lego creation threatening to pull apart at the seams, and it tilted ominously. It was easy to imagine the behemoth gliding inexorably into the BioMed building. In fact, an extra semi was commissioned to help anchor the structure.

Wednesday, day two, the house headed west, inching its way up Olive Street past the medical school, and parked overnight in the street. Thursday morning, it turned left onto its new lot, and slid over the waiting rebar-and-concrete foundation.

Moving the Green house is the University’s first major step toward constructing a north-south walkway that will connect the campus. Flanked by new classroom buildings and a creative arts complex, the walk will run from Alumnae Hall on Pembroke campus, to Lincoln Field at Brown.

Watch videotape of the move here

Reader Responses to History On the Move